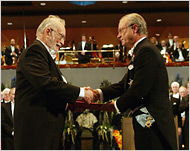 Paul C. Lauterbur, who shared the Nobel Prize in Medicine in 2003 for developing magnetic resonance imaging into a way to look inside living organisms, died yesterday at his home in Urbana, Ill. He was 77.

The cause was kidney disease, said the University of Illinois at Urbana-Champaign, where he had worked for 22 years.

Magnetic resonance has revolutionized medicine, giving a clear look inside the vulnerable human body without cutting it open; it avoids not only unnecessary surgery but also the radiation of X-rays. Even the brain is now becoming an open book, as subsequent refinements have allowed researchers to identify which parts are active during different mental tasks.

“Paul’s influence is felt around the world every day, every time an M.R.I. saves the life of a daughter or a son, a mother or a father,” Richard Herman, the chancellor of the Urbana-Champaign campus said in a statement yesterday. ( link)