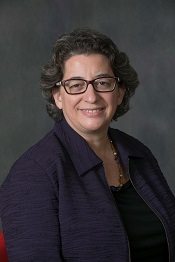 Our research probes the interface between organic chemistry and materials science, especially in the area of conjugated systems. Conjugated organic molecules and polymers have attracted increasing attention for applications as semi-conducting materials. Ideally, organic semiconductors are lighter in weight, more easily modifiable, and less expensive than their inorganic counterparts. These properties make highly unsaturated (carbon-rich) organics attractive, for example, as components in large-area displays, light-emitting diodes, chemical sensors, and even high-tech pigments. Work in the Goroff group focuses on finding new conjugated molecules and polymers with unusual electronic and optical properties, and using those materials to understand electronic and energy transport more thoroughly.

One focus of our research is the chemistry of conjugated halocarbons, including iodoalkynes and halogenated cumulenes. We have prepared compounds 1-6 (Figure 1), most of which were previously unknown. The simplicity of these molecules conceals their interesting chemistry.

Compounds 1-3 contain strongly Lewis-acidic iodine atoms. We can use these acidic sites to guide self-assembly of macromolecular systems. We have used such ordered assemblies to polymerize 1 to poly(diiododiacetylene), or PIDA (7), a unique conjugated polymer consisting only of a linear carbon backbone and iodine-atom side groups. A major focus of our research is understanding the properties and chemistry of this new polymer. For example, we have found that treatment of PIDA suspensions with pyrollidine leads to a highly conductive new material, structure still unknown. We are also investigating the graphitization of PIDA fibers, which may take place under relatively mild conditions. In recent experiments, we have also obtained evidence for ordered polymerization of triyne 2 and tetrayne 3.

Recent experiments with PIDA have led to the discovery of a previously unreported reaction, namely the base-induced elimination of iodine from trans-diiodoalkenes to provide the corresponding alkynes (Figure 3). For PIDA, this reaction provides a potential route under clean, mild conditions to the linear carbon allotrope, carbyne.

Figure 1. Halocarbon compounds 1-6 have all been prepared and studied in the Goroff lab. 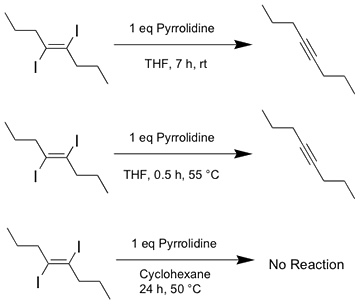 Similar to fullerenes and carbon nanotubes, these “buckybelts” will have a π system formed from adjacent benzene rings linked together into a cylinder. However, unlike fullerenes or nanotubes, the belts will have open edges which can be functionalized to alter the structures' physical, electronic, and chemical properties. In addition, the edges will allow for reversible binding of cations or small molecules inside the cylindrical cavity. This binding, which is impossible under ambient conditions for closed-cage fullerenes, make the belts potential components for nanoscale switches.

Our most recent approach to the buckybelts is to synthesize substituted cyclopentaphenanthrenes and attach them to a three-fold symmetric scaffold, such as in compound 9 (Figure 5). Coupling the carbonyl groups of 9 together by McMurry couplings will provide a direct precursor to the belt. Oxidative aromatization will complete the synthesis. 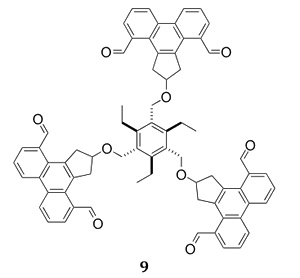 Figure 5. We are building compoung 9 as a precursor to the buckelt 8.