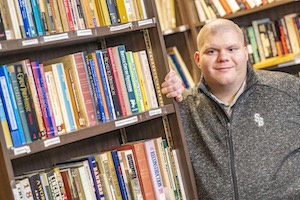 “… Previously, I was able to either find my primary sources online or they were in book format. For this thesis, I had the opportunity to do archival research for the first time--which, as I am planning to start history graduate studies next year, has been an extremely valuable and beneficial experience.” — Franklin Eck

Early American history has been a passion for Franklin Eck since elementary school. He has annually attended many of the history conferences at Fort Ticonderoga New York since 2009, eager to learn more from attending seminars on the American Revolution, or the War College of the Seven Years’ War. But it was as a history major at Stony Brook that Franklin was able to explore his fascination with the local history of Ulster County in full depth.

Working under the mentorship of Dr. Paul Kelton, Franklin did an extensive project on the History of the Esopus Wars (1659-1660), which has been published in the Stony Brook Undergraduate History Journal (2021). More recently, Franklin has been hard at work on a senior honors thesis, also supervised by Dr. Kelton, titled: “”A Nursery for almost every Villain in the Country””: The Burning of Kingston, New York on October 16, 1777.

What Franklin values most as an aspiring graduate student in the field of 17th and 18th Century North American, Atlantic World, and Early Modern British history was the opportunity to do primary archival research: through this thesis project, he was able to gain access and to give consideration to the somewhat neglected memoirs of George Tappen of the historic Tappen family. Franklin is the recipient of the History Department’s Gardiner Scholarship award, and plans to pursue a master’s degree in history following graduation in May.

Prior to coming to Stony Brook, Franklin earned  an Associates’ Degree from Dutchess Community College (SUNY), and graduated from Ridge School in Salt Point. His hobbies include reading history, and visiting historic sites. Below are excerpts of his interview with Karen Kernan, URECA Director.

Karen:  Tell me about your senior thesis project.

Franklin: So my topic is the burning of Kingston, New York on October 16, 1777 during the American Revolution.  I chose this topic because I’ve lived in Ulster county and Kingston for almost my entire life, and it is a topic that to me needed much more exploration. There has only been one book specifically about it, which was published in the 1860s,  so it was a topic that I wanted to do, and one that involves original research.

What kinds of materials or sources did you access to work on this project?

I started with the Senate House State Historic Site which is very close to where I live in Kingston. And other places that have been helpful include the New York Circle Society and the New York Public Library.

In the fall I went to both places and discovered some very useful sources. I actually found an account of the burning by George Tappen  from 1847 that I  believe has never been cited or used before. The county archivist I have been working with was familiar with it, but  to my knowledge I  have not seen it cited or used before.

That’s exciting. What are some of the highlights of what you’ve found through your research?

In terms of telling what happened, some of the most interesting  information is in the sources. Being able to find a reasonable explanations for certain events — for example why several of the buildings were not burned— have possibly come to light through my research. George Tappen who was a child during the burning, noted in his account that one of the houses that was not burned was owned by a British Army captain, which provides a much more plausible explanation than some of the other explanations that were widely circulated.

Were nearly all of the historical records lost due to the fires?

No, actually Christopher Tappen  (George Tappen’s father) was the county clerk was able to get all of the city, county and state documents away. Kingston was the state capital at that time. And because of him, we actually have documents for historical events prior to the burning. Actually I worked previously on a research topic on the Esopus wars of Ulster county in the 17th century, something which I was able to do mainly because Tappen was able to save those records in 1777!

You've written many papers for different classes.  But what is it like to take on the challenge of doing a senior thesis project?

It is certainly much more involved. Previously, I was able to either find my primary sources online or they were in book format. This time, I had the opportunity to do archival research for the first time— which, as I am planning to start history graduate studies this fall,  has been an extremely valuable and beneficial experience.

Tell me a little bit more about your long term plans.

I decided to apply for master’s programs for this fall, and to enhance my preparation in the future for doing a history PhD.  I would like to specialize in 17th and 18th century, North American,  Atlantic and Early Modern British history, but more broadly Early Modern history.

Who is your advisor for your senior thesis?

Dr Paul Kelton.  He has been very helpful in terms of giving me feedback, and offering to help me in getting access to primary sources.

When you transferred to Stony Brook, did you know you wanted to delve into history?

Yes, I did, I was interested in Stony Brook University because they have very strong historians specializing in Early North American history, I  wanted to build up my skills by taking a lot of history classes that are offered here.

Was there anything in particular that sparked a love of history, or that set you on this path?

When I was in about fourth or fifth grade, I started reading some textbooks on 17th and 18th century North American history, and my interest just grew from there.

If you were talking to other history majors,  what would you advise in terms of getting involved in research or doing a senior thesis ?

Although it is a challenge, I think it is absolutely indispensable to be able to do archival research, if you plan on going into a history MA or PhD program. It  is also very helpful if you plan on going to law school too, because lawyers sometimes have to make arguments regarding historical legal precedents, and legislation. The process of finding sources and learning how to cite and use historical sources is an extremely valuable skill.

How much is left to do on your thesis?

Well, I should say I ended up writing it not in order.  I wrote Chapter Two first which  is about the burning itself, and involved using the greatest amount of primary sources from archives. Now I am very close to finishing Chapter One, and then I will write Chapter Three, which I think should not take as long at all because there are less sources for that chapter.

Have you ever had the chance to publicly present your historical research?

No, not yet.  I have attended many conferences over the years, but have never had the opportunity to present. I’m a little nervous about the upcoming conference in May, but I know Dr Kelton will go over my presentation with me.  I am hoping that when I sit down to put it together, all the presentations I have seen over the years will help me when I am putting together my own talk.

And what describes what you enjoy most about doing this type of work?

I just really like this area of history. Getting to do primary research has been a great experience!