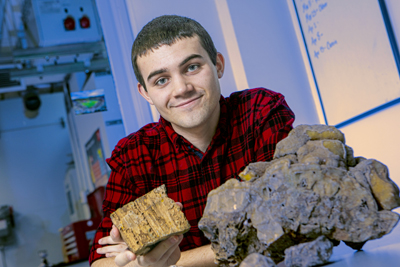 Kevin Hatton is a Geology major who has been doing research under the mentorship of Professor Troy Rasbury (Dept. of Geosciences) in the Facility for Isotope Research and Student Training (FIRST) Lab for ~2 years. Last summer, Kevin was awarded URECA funding to support his work on “ U-Pb dating of Petrified Wood in the Turkana Basin,” a project involving the screening and characterization of samples of carbonates and petrified wood collected in fall 2018 from Miocene strata in the Turkana Basin, Kenya.  Using laser ablation inductively coupled plasma Uranium/Lead  (U/Pb) dating, the goal is to provide ages on petrified wood associated with important fossil finds. Kevin presented a poster on this work at the American Institute of Professional Geologists (AIPG) National Conference in September 2019 in Burlington, VT. In January, through a collaborative proposal with Professors Troy Rasbury and Gregory Henkes, Kevin had the opportunity to travel for two weeks to the Turkana Basin to collect additional tree fossil carbonate samples for the project.

Kevin was first introduced to research at Stony Brook while he was still a community college student through the NSF-funded GEOPATH-IMPACT Summer Research program at Stony Brook (led by Prof. Brian Colle, SoMAS). Under the mentorship of Prof. Weisen Shen (Geosciences), Kevin gained exposure to geophysical research, and developed skills in Python programming. He was also introduced to mass spectrometry work in Prof. Rasbury’s FIRST laboratory, and after transferring to SB, became subsequently involved in various projects, including a collaborative project with Prof. William Holt’s group involving dating volcanic ashes from the Southwest United States. At SB, Kevin has also participated in the S-STEM Assets program for transfer students, a program administered through the Dept. of Technology & Society and the Career Center. Kevin has volunteered to represent the Geosciences department at several events, including CommUniversity Day (2018, 2019), and organized a geology trip to Central park for students.

Reflecting on his many positive experiences in the Geosciences Department, Kevin states: “I’m happy to have found something that I know I really love.. I have not stopped being excited about the work that I do—the opportunities that come up.”

Kevin plans to pursue graduate (PhD) studies in geochronology at Stony Brook University. He is a graduate of Center Moriches HS, and in August 2018 completed an Associates degrees in both Geology and Physics at Suffolk County Community College. His hobbies include camping, hiking, and lapidary.  Below are excerpts from his interview with Karen Kernan, URECA Director.

Karen. Tell me about your current research.
Kevin. I work with Prof. Troy Rasbury in the Facility for Isotope Research and Student Training Lab. My URECA project is: Uranium- lead (U/Pb) dating of petrified wood and carbonate samples collected from Miocene strata in the Turkana Basin Kenya. Many people are familiar with carbon dating—but that is only accurate to up to 50,000 years ago. This is why we use U-Pb dating which can measure much deeper in time. U-Pb  dating of carbonates is kind of a new way to define the age constraints for fossils found within the Turkana Basin, and we hope, will be able to provide a more complete picture of the timing and pace of evolutionary advances.
Dating fossilized wood samples by U-Pb hasn’t been well tested previously. And there aren’t a whole lot of labs that do it right now. It’s sort of an emerging methodology…. So the way we do this U-Pb dating is by laser ablation, which allows you to quickly measure and then get a relatively accurate age (The next step would then be microsampling the most viable U-Pb regions of the sample for isotope dilution).

It’s really interesting work. And I don’t just work on that one project. There are a lot of things that I’ll work on—contract samples, for instance. I like to see all the different things that our lab can do. We provide ages for things, but that’s not all. People could also want to know about concentrations, or provenance (where you can analyze where a sample came from), sourcing materials, etc. which we can help with.

How did you first get involved with your research group?
I was a transfer student from Suffolk. And I first got introduced to the Geology department here through the GeoPATH program, a 4 week program where I did a geophysics project under Dr. Weisen Shen. At the end of the 4 weeks, I just moseyed across the hall to Dr. Rasbury’s lab and asked: “What’s going on in here? Is there anything I can help with?” There was a period of 4 months, just after starting at Stony Brook, when I was just regularly showing up to the lab asking. “Anything I can do today?” Eventually Prof. Rasbury said, "Here’s a project for you." And that was the project with the Turkana Basin samples, a project that proved to be very promising, and became the project I proposed for the URECA Summer program.

GeoPath got you off to a good start!
Yes, it was a very good program. It helped me transition to Stony Brook. It got me familiar with the layout of the campus. And I got to meet a lot of professors. And luckily, it introduced me to Prof. Troy Rasbury, her lab manager Katie Wooton, and Steven Jaret (then in the final years of a PhD). I got so much help from all of them, especially Katie – with the research, advice for graduate school, etc. And I ’m happy to have found something that I know I really love. I have not stopped being excited about the work that I do— the opportunities that come up. It’s been valuable to get different experiences. I really enjoy doing geochemistry where you start with a rock that you can actually touch and see and feel. To do laser ablation, you need to take your rock and cut it down to a couple centimeter size chip. I found that I definitely enjoy this type of work more than a project that is all programming. It’s a lot more active, hands-on.

Do you have any advice for other students about getting involved in research?
In my experience in Geosciences, getting involved in research is as simple as talking to professors. I made the point my first year and a half to talk to the professor in their office hours, and ask about what research they are doing, and to show up a second time to continue the conversation. I tried to keep my eyes and ears out for any opportunities to do any extra work or experience. But the first question to start with is always: "What research do you do?" From there, you can follow up with: "Do you need help?" Or if something they do takes your interest, keep asking about it.

Was it beneficial to participate in URECA over the summer?
Normally, I’d be working at a local job over the summers, at an ice cream store. I’ve been doing that for about 9 years, making money to pay for school. So URECA was extremely helpful, because I was able to do my research, something I love, and I didn’t have to work a traditional summer job. I was able to really focus on my project. I tried to do as much as I could. And the more you do, the better you feel about it, and the more you understand it. I felt like I got a lot of work done over the summer. We’re working to publish some of our findings now. And then, on top of that, we got a grant funded, the Turkana Basin Institute, to send us to Africa.

That's wonderful!
This all came about because when Prof. Rasbury, and Prof. Gregory Henkes (affiliated with TBI) submitted a proposal regarding the U-Pb dating of samples –they included me in the proposal. So I got to contribute sections from my URECA project, and contribute to the proposal. And then, it got approved! We left Jan 12, and returned on the 26th. So I got to spend two full weeks in Kenya. I hadn’t really traveled much before. This was only my fourth plane trip. So having the chance to do geology field work, which is basically going out on a hike and finding something hopefully, was really an amazing experience! I had a great time. We went to 4 separate areas while we were in Kenya, with a focus on collecting more fossilized wood. There were two other projects that we were checking up on. One was examining an area to see if we could provide any more dates or ages to help improve our understanding of the site. The other was trying to scout out locations for the field school that will be operating there this summer. There were 2 professors, 2 graduate students on the trip, and it was a cool dynamic to see everybody working together and really solving problems. That experience really put into perspective that what we are doing is important. It’s amazing to be a part of that, to know that you’re supporting other people’s research with your work.

What are your future plans?
I‘ve applied to a few graduate programs. I know I want to do geochronology research. And I like the variety of projects I’ve worked on so far — from the Turkana Basin project (which will provide data for anthropologists), to a project I’ve worked on with Prof. Bill Holt where we’re analyzing volcanic ashes for a model of how the western US changed over the last 36 million years. Plus all the various contract samples we’ve worked with…. I like that our work supports so many other sciences and interests.

What’s the most unusual experience you’ve had in the lab so far?
We currently have some dinosaur fossils that we’re trying to see if we can date, including a crushed dinosaur egg in red sediment. That was kind of a weird experience, cutting up dinosaur eggs to shoot a laser at it is something I never could’ve thought of. It is an unusual method, but we’ll see if it works. In general, though, I just really like the experience of cutting up a rock and seeing what it looks like on the inside.  A rock on the outside does not always look interesting. When you cut it up though…it can look really different. I’m always excited by that. It’s fun!