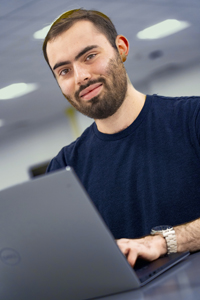 Perri Zilberman is an Honors College junior majoring in Physics who was recognized last May with the Department of Physics Fumi Kato Award.

During his freshman year, Perri fortuitously attended a World of Physics talk on the “Universe According to Neutrinos, Nobel Prizes, Breakthroughs and Future." A follow-up discussion with Dr. Chang Kee Jung about his lecture led to a position in Professor Jung’s group as an undergraduate researcher. And that meant joining the Deep Underground Neutrino Experiment ( DUNE), an international collaboration for neutrino science hosted by Fermilab (Batavia, Illinois) involving over 1000 collaborators from over 180 institutions in over 30 countries.

As a member of Dr. Jung’s research group, Perri dedicated much of sophomore year to learning new software & programming tools (dunendggd, edep-sim, ROOT), so that he could assist the research group with its contributions to DUNE. Since then, Perri has been involved in creating a geometry simulation for the DUNE Near Detector and working with his group to help build a prototype scintillator detector, among other contributions. This past fall, Perri presented his DUNE Near Detector Geometry at the September 2019 DUNE collaboration meeting. For Perri, the connection with a big international collaborative project makes him “feel like I’m contributing to something larger than myself— which is an amazing feeling!”

Before starting at Stony Brook, Perri already had substantive research experiences as a high school student at John F. Kennedy HS in Bellmore NY. There, Perri worked for over three years on an independent research project under the supervision of Dr. Peter Plavchan (George Mason University) concerning debris disks around Hot Jupiter bearing stars. For his work on this project, Perri was recognized as a National Young Astronomer Award First Place Winner, and was named a semifinalist in the prestigious Siemens Competition, among other honors.  During this time, but as part of assisting with a separate astronomy project hoping to find exoplanets around the star AU Microscopii, he had the opportunity to remotely operate the 3-meter Infrared Telescope Facility (IRTF) in Mauna Kea, Hawaii.

At SB, Perri has been involved with the Astronomy Club, serving as Secretary this year. This involves hosting numerous on campus outreach events, creating fun but informative weekly presentations for GBMs, and using telescopes (including the 14” telescope on the roof of the ESS building) to show both students and the public the wonders of the cosmos. He has also enjoyed working on an optical tweezers project at the Laser Teaching Center in the summer of 2018 under the direction of Samet Demircan and Dr. Harold Metcalf. After graduating, Perri plans to pursue graduate (Ph.D). studies in physics.

Perri Zilberman is a resident of Merrick, NY.  His hobbies include playing guitar and amateur astronomy. Be sure to look for his poster at URECA’s upcoming research symposium (May5th) on: A Flexible Geometry Simulation for the DUNE Near Detector Hall. Below are excerpts from his interview with Karen Kernan, URECA Director.

Karen. Tell me about your current research.
Perri. The group that I’m a part of is working on an international collaboration called DUNE – the Deep Underground Neutrino Experiment. The goal of this project is to study neutrinos. These are fundamental particles like electrons or quarks, and have a lot of interesting properties. They barely interact with matter, meaning that every second trillions of neutrinos are passing through your body. As it turns out, studying neutrinos may help us answer some very important and fundamental questions. For example, it may help us answer the question of why there is more matter than antimatter. Current physics predicts that when the Universe was young, the amount of matter and antimatter created should have been the same. But if this was the case, the matter and antimatter would have annihilated each other, resulting in a Universe with no matter at all. Since you and I are here to talk about this, that obviously didn’t happen. There is clearly something that we are missing, and neutrinos may be the key to finding what that is. DUNE will also search for proton decay, which has been theorized but never seen, and search for and study neutrinos generated by supernovae.

My group also lead the construction of a prototype detector similar to one that will be a part of the Near Detector; I worked on that as well. We’re going to be testing that prototype detector at Los Alamos National Lab in December.  I’ve also helped with a few other things, such as assisting with simulation studies.

How did you first get involved in research at SB?
When I was a freshman in my spring semester, I attended a World of Physics lecture by Dr. Jung on neutrinos and the DUNE project. It seemed really interesting to me, so after the lecture I went up to him to discuss some questions I had on neutrinos, and asked if I could help out with the project. After Dr. Jung told me that I could, I spent the next few weeks reading articles given to me by Dr. Jung, meeting with him to discuss the articles, and going to group meetings. Considering the large amount of programming required for this work, I also had to get acquainted with the software we used. It took a bit of time before I could start contributing.

Dr. Jung also introduced me to Dr. Guang Yang, a postdoc within the group with whom I work on a day-to-day basis. Dr. Yang  guides me through the day-to-day challenges of the research process.

Have you had the chance to present a poster/talk?
I did actually. Fermilab recently hosted a collaboration meeting for DUNE (in September), and I gave a talk about the DUNE Near Detector geometry I made over the summer. I  have presented research before, both on my current DUNE work and on my prior astronomy research, but this was my first time presenting my work at such a large scientific meeting; It was a bit nerve-wracking, but it was a good experience overall.

What is most satisfying aspect about being involved research?
Finding something that no one has ever found before is absolutely one of the main things. The amount of knowledge that we have gained over the past decade alone is astounding. Last year, we directly saw a black hole for the first time. A couple of years before that, we discovered gravitational waves, and only a few years before that, we discovered the Higgs Boson. And that’s not even looking a how much we’ve learned over the past hundred years. Imagine how much more we will learn in the next few years? I want to be a part of that.

In addition to that, though, with the project I’m working on – specifically the DUNE project, which is this big international collaboration involving scientists and institutions from all over the world, I feel like I’m contributing to something larger than myself —which is an amazing feeling! I’ve worked with people from England, Germany, Russia...the list goes on. It’s a great experience.

Is what you are learning through your research experiences different than what you learn in the classroom?
It’s a lot more applied, I would say. There’s a lot more real world problem-solving involved. You know that the problems you get in class will probably have a nice solution, and you know some ways that you can try to solve the problem. With research, you aren’t sure what a solution to your problem might look like and sometimes it can be hard to even know where to start. A lot of times, research can actually feel like one long chain of getting and having to solve these problems, but that’s part of the fun.

Did you have any previous research experience?
In high school I was part of a research program, and as a part of this program I spent several years working on a (mostly) independent research project on exoplanets. I worked with a professor who’s currently at George Mason University, Dr. Peter Plavchan. My work at the time involved studying a type of exoplanet called Hot Jupiters, and seeing whether stars with Hot Jupiters also tended to have disks of debris around them. Hot Jupiters are a type of exoplanet with a similar mass to Jupiter, but orbiting incredibly close to their host star. However, we don’t know exactly how Hot Jupiters form. One idea is that Hot Jupiters form far away from their host star, and migrate inwards. This would disrupt the orbit of other bodies in the system, causing collisions to occur, and creating disks of debris in the process. If we observe Hot Jupiter bearing stars tending to have debris disks more often than an average star, we would have important evidence supporting the idea of Hot Jupiter migration.

I also had the chance to assist Dr. Plavchan with one of his own research projects, which involved observing the star AU Microscopii. The goal was to collect data to see whether there was an exoplanet orbiting AU Microscopii. This is important, as this star is very young, and any exoplanets that it may have would still be in the process of forming. If this star had any exoplanets, it would be a great opportunity to investigate solar system and planet formation. During that project, I had the opportunity to remotely operate NASA’s 3 meter IRTF telescope in Mauna Kea, Hawaii. It was definitely an exciting experience! You don’t get to operate a telescope like that every day.

What advice would you give about research?
Try to get started with research as early as you can. From talking to a few of my peers, I think that some have the idea that they shouldn’t ask professors to do research until they’ve taken more classes or until they have more experience. But I don’t think there’s anything wrong with asking professors as early as you can to get involved in their research. If there’s something stopping you from being able to do the research, the professor will definitely let you know.

Did having prior research experiences in high school help you?
Absolutely. There are lots of skills that aren’t taught in classes. For instance, being able to work independently, and learning how to solve problems on your own. Like I mentioned before, a lot of times you can run into problems that you have no idea how to even approach. But the problem still needs to be solved. Being able to work through that is an important skill.

Reading, writing, editing, and revising journal articles is another skill that you don’t learn in class. Going through the peer review process is definitely not something that you’ll experience in a classroom.

Learning how to communicate with professors and within a larger research group – that’s also extremely valuable. Especially since research is such a team sport. You’re rarely working in a vacuum. Because of the experiences I had in high school, I was able to jump right in when I came to Stony Brook.