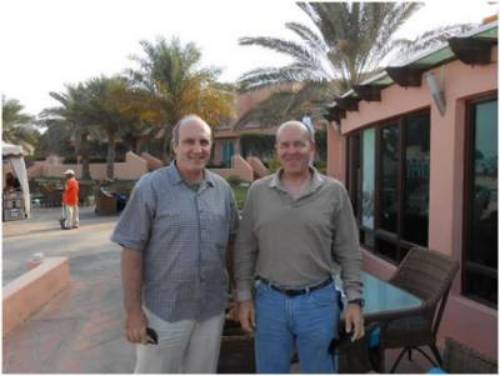 Myself and brother (Dr. Mark Davis) who I met at a seaside resort on the Persian Gulf when both of us were living in the Middle East.  The heat of that area must have gotten to him as he moved to Kazakhstan.

"Among other assignments I have served in such places as South Korea (on the DMZ), as a platoon leader for the Commander-In-Chief's Guard (for President Ronald Reagan) of the Army's Old Guard, as a staff officer for the 11th Special Forces Group and as an operations and intelligence officer for the 10th Mountain Division's Mountain Warfare School in Vermont.  I have also served in overseas capacities in the Middle East.  I have attended numerous schools to include Airborne, Ranger, R.O.K. (Republic of Korea) Ranger, and Special Forces Officer Qualification Course. From 2000-2007 I worked at Valley Forge Military Academy and College in Wayne, Pennsylvania.  I worked as a Tactical Officer, and judo and wrestling coach, among other varied duties. In the latter stages of my Master's degree work in Higher Education Administration, I will be seeking work again in a higher education capacity.

When I am not studying, I enjoy taking Chinese language courses at Stony Brook University's Confucius Institute, participating in veteran's events sponsored by the Veteran's Services Office, studying judo and other martial arts, and following my favorite sports teams, the Dallas Cowboys and the New York Yankees."