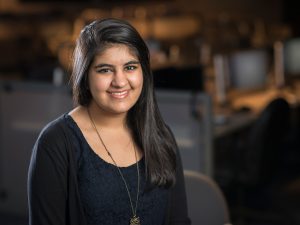 The Marie Colvin Fellowship, sponsored by News Corp, will support a 10-week reporting assignment with The Wall Street Journal for a graduating senior in Stony Brook University’s School of Journalism. The first recipient of the award is Hanaa’ Tameez, 21, who will travel to Mexico City to work as an intern in the Journal’s bureau following her 2016 graduation from SBU.

“We are so proud to sponsor this fellowship, named after a journalist who herself embodied the very best of this great and essential profession,” said Keisha Smith-Jeremie, Chief Human Resources Officer for News Corp. “Support for a free press is one of the pillars of News Corp’s philanthropy, because we seek to protect and defend the ability of journalists to fulfill their vital function around the world.”

“The Wall Street Journal is pleased to offer Stony Brook students hands-on experience to match the high level of instruction they’ve received on campus,” said Michelle LaRoche, WSJ’s development editor. “We look forward to working with these journalists as they embark on an exciting and meaningful career in the profession.”

The Marie Colvin Fellowship honors the journalistic ideals of acclaimed international correspondent Marie Colvin, who was killed in 2012 while covering the conflict in Syria for the Sunday Times of London, the weekly paper owned by News Corp. During the nearly two decades she worked at The Times, she covered thousands of stories, traversing the globe from Chechnya to Sri Lanka to the Middle East.

Shortly after Marie’s tragic death, Stony Brook University, with the support of the Colvin family, established the Marie Colvin Center for International Reporting to nurture and train the next generation of international reporters. Marie Colvin was a Long Island native who grew up approximately 30 miles from the university. She was known for her moving accounts of innocent civilians caught in the tide of war, and for her courage, tenacity and indefatigable commitment to truth.

“We are dedicated to preserving Marie Colvin’s legacy and nurturing in the next generation of journalists the kind of tenacity and commitment to ground truth that Marie embodied,” said Stony Brook School of Journalism Dean Howard Schneider. “This award helps make that possible.”

The fellowship will give one outstanding graduating senior or master’s student the opportunity to work at one of the Journal’s international bureaus. A faculty selection committee chose finalists for the award, and Journal editors selected the winner.

Hanaa’ Tameez, the inaugural recipient of the award, was a journalism and Spanish double major at Stony Brook University, and the former editor of the campus newspaper The Statesman. She said she hopes to pursue a career in investigative reporting or documentary production. “I don’t think I could have asked for a better result after graduation,” she said about the award.

Hanaa’ will work both independently and as part of a team alongside beat reporters and editors, covering news events, producing stories for print and online in real time, and helping to produce online graphics and, on occasion, video elements. There will be opportunities to undertake broader enterprise reporting projects.

In 2013, Rupert Murdoch, Chairman and CEO of News Corp, made a $50,000 gift to Stony Brook University’s School of Journalism to further the development of the Marie Colvin Center for International Reporting through the News Corporation Foundation. Mr. Murdoch’s donation helped to expand the Marie Colvin Center’s overseas reporting program, Journalism Without Walls, which among other places has sent student journalists to Russia, Cuba, China, Kenya and Turkey.

About News Corp
News Corp (NASDAQ: NWS, NWSA; ASX: NWS, NWSLV) is a global, diversified media and information services company focused on creating and distributing authoritative and engaging content to consumers throughout the world. The company comprises businesses across a range of media, including: news and information services, book publishing, digital real estate services, and cable network programming and pay-TV distribution in Australia. Headquartered in New York, the activities of News Corp are conducted primarily in the United States, Australia, and the United Kingdom. More information: http://www.newscorp.com.