Two recent graduates and one current student from the Stony Brook School of Journalism were among those recognized nationally by the Hearst Journalism Awards Program. Another, a current student, was also honored.

2019 graduates Neda Karimi and Bria Ellis were recognized for multimedia reporting projects undertaken as part of the senior capstone experience course. Liz Pulver, who will graduate in May, was recognized for a piece from her weekly broadcasting course.

“I see so much good work coming out of the School of Journalism, but I was still surprised that I won. The talent of the students who also submitted their work was really impressive; I was going up against students from other really good schools,” said Ellis, who is pursuing an MBA at Stony Brook.

Karimi won first place in the Multimedia II – Innovative Storytelling and Audience Engagement category. Karimi’s website, #we stan 2020, explored how politicians, notably Barack Obama, become celebrities and attract celebrity-style followings among their fans. The site particularly focused on the celebrity status of many of the 2020 Democratic presidential candidates. The term “stanning” was taken from the 2000 Eminem hit, “Stan,” about an obsessed fan.

Karimi’s project will move on to compete with four other finalists in the 60th annual Hearst Journalism Awards Program Championships. The 2020 Hearst multimedia finalists are top winners selected from the first three multimedia competitions held this academic year, which garnered more than 200 entries.

Ellis was one of the top 20 finalists in Hearst’s Digital News or Enterprise Story Competition. Her story, Taking Fashion out of the Fast Lane, tracked the growth of the sustainable fashion movement following the 2013 collapse of the Rana Plaza in Bangladesh in which more than 1,100 garment workers were killed. 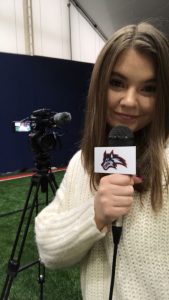 Pulver’s piece, Unveiled: California Wildfires, was part of an in-depth reporting series created with a few of her classmates called “The 631.” Pulver, a California native, sought to illustrate the increased risk of and devastation of wildfires to East Coast residents.

“Showing everyone the footage I found and the footage my sources sent me made the story and the fires really real,” said Pulver, who also plays volleyball for Stony Brook. I”t’s one thing when you see the fires on the news but it’s another when it’s footage someone is sending you through text message. Obviously the East Coast has disasters, but fires are a unique kind of disaster. It feels like armageddon.”

The Hearst Journalism Awards were founded in 1960 and distribute $700,000 in prize money to winning student-journalists throughout the year. In addition to the multimedia category, prizes are awarded for photojournalism, writing and broadcasting. Students from journalism programs accredited by the Accrediting Council on Education in Journalism and Mass Communications are eligible for entry.

The Stony Brook students’ work competed with students from the leading journalism programs in the country, including Syracuse University, University of Florida, University of North Carolina at Chapel Hill and Penn State, among others.

“The award was surprising, but it was also a validation; I knew what we were doing with the 631 program was unique and special and relevant,” said Pulver. “It was nice to hear that what we were doing really was valid and interesting.”