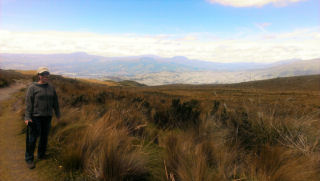 Marisa Lim , a member of Catherine Graham and Liliana Davalos’ labs, was awarded a NSF GRF in 2014.  In addition, she was just awarded an NSFP Doctoral Dissertation Improvement Grant.  These extremely competitive grants provide support to doctoral candidates, allowing an opportunity for students to expand their dissertation research beyond their already existing project.

Tell us a little about your research:
Put simply, for my dissertation, I’m trying to understand why there are so many species of hummingbirds and how they are adapted to living at high altitude in the Andes Mountains. There are at least 338 species of hummingbird, with the greatest number of species inhabiting the Andes, although they occur throughout the Americas. Across all hummingbird species, the average weight is five grams (the weight of a nickel). They also have the highest metabolic rates of any bird, so how do they survive in low oxygen and cold conditions?
How will the DDIG expand your dissertation?
It will allow me to explore high altitude adaptation from a population genomic point of view, building on work I am already doing on species-level differences across elevation. I hope to quantify genetic variation among populations along an elevational gradient, as well as to illustrate how populations of hummingbirds colonized the Peruvian Andes.
What brought you to this topic?
I’ve always been interested in bird biology (largely thanks to early neighborhood birding experiences) and during college, I became very interested in studying population genetic patterns to retrace the evolutionary history of a variety of species. So, when the opportunity came to investigate how hummingbirds living in the Andes Mountains are genetically adapted to high altitude conditions, I grabbed it! 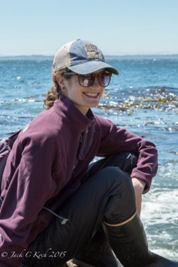 Alyssa Liguori was one of three NSF GRF award winners this year. A member of Dianna Padilla’s lab, she completed her undergraduate degree at Dowling College on Long Island.
What are you investigating?
I am interested in how organisms deal with changing environments. For marine organisms, ocean acidification is becoming a major stressor. This global change in the chemistry of the oceans is predicted to rapidly intensify over the coming centuries and it is not clear how ecosystem dynamics will be affected. Over the past decade, there has been an explosion of studies testing organismal responses to increased acidity, but the majority involve short-term “shock” experiments. These studies are not very useful for predicting long-term biological dynamics. To improve our predictive power about the long-term effects of ocean acidification, I will perform multigenerational experiments using harpacticoid copepods (tiny crustaceans) as a study system. I will investigate their capacity for acclimation and adaptation and I will work to identify the molecular mechanisms underlying these processes. Copepods are the major link between primary producers and higher trophic levels in many aquatic environments therefore, it is critical to understand how they will be affected as the oceans continue to change.
Where do you expect to conduct your field work?
I have not started my field work yet. But if everything goes as planned, most of my field work will be in the San Juan Islands in Washington, Long Island, and Hong Kong.
How did your research interests develop?
As an undergraduate, I was involved in a range of projects at Dowling College and Brookhaven National Laboratory. I studied the population dynamics of horseshoe crabs on Long Island, the diversity of brachyuran crustaceans on Easter Island, and resistance to gamma radiation in soil microbes. As I planned my graduate research, I think I drew from these experiences and merged my interests in organismal tolerance to stressors and marine arthropods.
You did your undergraduate work at Dowling College on Long Island.  When you aren’t working, are there activities on Long Island that you enjoy?
I love trail running and there are endless trail options on Long Island, especially if you are willing to drive to the east end. I have been exploring the trails here for many years and I still have not come close to seeing them all.  And of course the beaches are the best, especially Montauk. 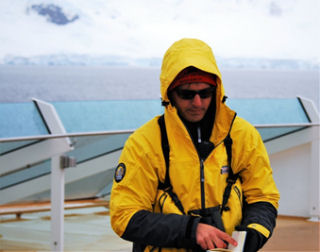 Alex Borowicz , a member of Heather Lynch’s lab, does fieldwork on the Antarctic Peninsula.  After starting out as a photojournalism student, Alex found his way to the Human Ecology program at the College of the Atlantic in Bar Harbor where he completed his undergraduate degree.

How did you develop your research interests?
I worked with marine mammals during and after college and ended up in the Antarctic as a cruise ship naturalist. It’s hard not to get hooked on a stunningly beautiful and understudied landscape in the midst of rapid environmental change.
What specifically, are you studying?
I’m broadly interested in the effects of climate change on the Antarctic Peninsula. It’s a simple system with a lot of species eating a lot of krill, but rising temperatures, melting glaciers, and changes in precipitation patterns are altering the marine spaces in which these interactions take place. Are there fewer krill? Are they moving? How do their predators change their lifestyles to reflect their new conditions?
What is the best part of doing field work?
Besides being in beautiful places, what really gets me is the degree to which I have to think on my feet to get things done in a challenging landscape. It’s physically and mentally taxing and the conditions can change pretty rapidly. We want good data in a small window of time, so we often have to plan while we’re moving.
Can you describe an average day?
We work primarily off of commercial cruise ships, so we’ll wake up in the morning, land at a penguin colony and get to work. Much of the work is census-based (counting penguins) but there are a lot of angles being investigated at once, so it’s frequently a rush to count, deploy equipment, and scrawl down some other field notes before we have to be back on the ship to move elsewhere.