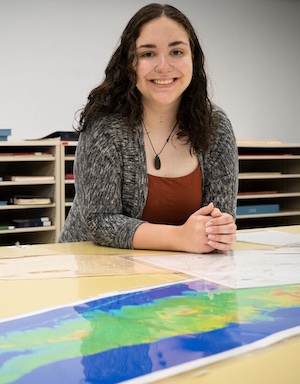 Grace Armann, an Honors College Political Science and History double major, and recipient of a 2021 URECA Summer fellowship award, is currently working under the supervision of Prof. Paul Kelton on a local legal history of the Indigenous Montauk tribe, particularly: “ The Loss of the South Shore: How the Montauk’s Land Was Stolen.”

Using court cases, legal documents and newspaper archives from circa 1909 to explore a topic on which little research is currently published, Grace’s project developed last spring from conversations with Dr. Kelton, her instructor for History 314: Indigenous Settler Relations in the US. For Grace, a lifelong resident of Long Island, the opportunity to work on local and legal history was strong motivation for writing up a URECA proposal:   “Honestly, I love local history so much and just recognizing place names mentioned ( …”Oh, I know where that is!”) or just seeing how laws about land documents from hundreds of years ago have affected current laws is super interesting. It's very fun to learn about the history of where it all came from.”

On campus, Grace serves as a Student Accessibility Support Center (SASC) ACE Mentor; a Food Pantry Volunteer; and an Orientation Leader (June 2020-April 2021); she is also a member of the Phi Alpha Delta pre-law fraternity, a violinist in the Undergraduate Symphony Orchestra, and has been employed in a variety of off-campus jobs. Grace is a graduate of Bellport Senior HS; her hobbies include photography, hiking, cooking, and collecting vinyl records. Below are excerpts of her interview with Karen Kernan, URECA Director.

Karen :  What is your summer URECA research project about?

Grace : I’m doing a project on some local indigenous history, working with Prof. Paul Kelton in the History Department. The particular topic has to do with the Montaukett tribe, and how they lost their tribal rights and their right to land settlement and land ownership out in the Montauk area progressively over the years, really culminating with a particular court case ruling in 1909. A number of documents, treaties, and patents from the colonial era established precedents regarding the rights of the Montaukett tribe to inhabit land while also allowing colonial proprietors to purchase it. When businessman Arthur Benson bid on Montauket land in 1885 with intentions to expand the Long Island Railroad project, the deed required Montauks to vacate their ancestral lands. The case reached the New York State Supreme Court in 1909, where Judge Blackmar not only ruled against the Montauk’s land claims, but also ruled that the Montauk were no longer a tribe.

I'm going to lean into the legal research specifically centering around Blackmar and his rulings and writings on the case, because that decision set a legal precedent against Indigenous land sovereignty for years to come.  I will ask how precedent was both applied and ignored in the Blackmar case, and what it meant for future indigenous land disputes.

Tell me about the primary sources that you plan to include for your project.

So I've been starting to look at the actual official ruling of Blackmar from the case, and also a bunch of newspaper articles from local and regional newspapers at the time. There’s some discussion in old New York Times issues about the ongoing fight of the Montauketts to keep their land rights and keep their tribal rights.

How accessible is the information?

I live in East Patchogue, and I kind of lucked out that my library happens to have a very good local history section, with a lot of primary sources about local indigenous history.  I visited and met with their local history researcher and got some wonderful information from them.  I was even able to photocopy documents, including a lot of the news articles. I do also plan on visiting a couple of other historical societies and archives as well.  I want to go to the Montauk Historical society, and also look at archives in the East Hampton libraries as well.

What originally motivated you to work on this topic?

I was taking a course on indigenous settler relations populations history with Professor Kelton this past spring semester, and when I first learned about the URECA summer program opportunity from a workshop you did at the Center for Civic Justice, I thought maybe it would be fun to do an indigenous history research project over the summer.  So I approached my professor about URECA, and he specifically suggested looking into this court case, and gave me  some readings from a book about Montauk history that he thought I might find it interesting, So then I was able to submit an application and proposal to URECA about the topic.

What the most surprising thing you’ve found so far?

Oh that's a good question!  I find it really interesting how so much of the legal content and literature is not as set in stone as you might expect it to be. A lot is very much up to interpretation, or that’s the way I would put it. So  if you look at the court cases and some of the other later rulings on land law and land ownership, you see that there's so much room for interpretation in it, because the laws were written at a time where they weren't predicting how the land would develop and how colonialism would look in the future. In historical research in general,  there's often no right answer or not any one correct answer. There are always going to be different conflicting perspectives and different opinions. But I hope I can still create a comprehensive record of what was happening, and how these perspectives were shaped.

How difficult has it been for you keep a narrow focus on your thesis topic? I remember that you provided an outline of what you hoped to do for each week of the summer program.

Already, I’ve been finding that I’m adjusting the structure as I go! For example, I found myself wanting to look for primary documents a little bit earlier than I had originally had it in my schedule,.  And I definitely do find myself getting distracted along the way, diving into other aspects of the history. I have to remind myself that I want to keep the narrow focus on the legal research and really draw like a clear line of thought about information gathering.

What so far has been the most fun aspect of doing this project for you?

I think, just the fact that it's local.  Honestly, I love local history so much and just recognizing place names mentioned (“Oh, I know where that is”) or just seeing how laws about land documents from hundreds of years ago have affected current laws is super interesting. It's very fun to learn about the history of where it all came from.

What do you get out of doing a large-scale thesis project like this that you wouldn't get necessarily from doing coursework along?

You have a lot of freedom with a project of this scope. Really it almost feels like too much freedom at times--if that makes sense. But it's given me the power to do all of my own decision making, and I really am guiding myself through all the learning.. it's not so much that the information is being handed to me; there’s just all this information out there and I have to go through it myself and choose what I need to be looking at, what is relevant to what I’m studying. And it's definitely a challenge! But already, it's given me a lot of confidence with developing better decision making skills, better critical thinking skills, as I work on it and have to figure out what's relevant or what's not, and what I should be looking at.

How does your mentor assist you with your project?

Prof. Kelton has been very helpful. He made some really wonderful suggestions me, the last time I met with him about keeping a record of absolutely everything I’m looking at and researching. Having a complete record of everything I did (what worked, what didn't, what was a dead end vs. what was helpful , what I would like to delve into more...) will be very helpful for me for other research topics in the future. A lot of what he suggested to me is not even just about the topic, specifically, although he's on certainly helping with that as well:  it's more about helping me to become a better researcher since this is my first time doing a project on this scale.

Do you have any advice for other students about doing research?

Don't be afraid to give it a shot! When I was first applying for URECA, I thought it sounded very interesting and I was really eager to learn, but at the same time I was intimidated because I didn't have any previous experience and wasn’t sure I would do it right. But just taking that leap and jumping right into it, I’ve been finding that you figure it out as you go. There's so much to learn, and it is absolutely worth it!