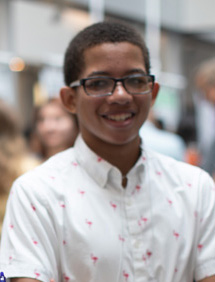 What makes computer science research so enjoyable? For Nathanael, it’s all about the collaboration, working together to solve problems:   “ I remember a few of those meetings ….when we were actually writing on the whiteboard , crossing things out, circling things... It was one of those stereotypical computer science problem solving moments when we actually figured out a lot of things. It felt really authentic. And I really felt that I was able to contribute. Usually it’s the professors who are teaching me things...but in moments like that, I am working with them, solving problems with them. And it feels really different and special.”

Nathanael Payen is a junior, double majoring in Computer Science and Applied Mathematics. He is a participant in LSAMP/Louis Stokes Alliance for Minority Participation, and CSTEP/Collegiate Science and Technology Entry Program (CSTEP) . And he was first exposed to research in a 4-week pre-freshman CSTEP program that culminated in a group presentation on “ Multimodal Cholesterol Mitigation via Nanorobotics”, a proposed alternative to bypass surgery using nanorobotics. Following that, Nathanael took the opportunity to be paired with a peer mentor through the INSPIRE/Include New Students through a Peer Introduction to Research Experience program, a multi-disciplinary mentoring initiative developed by Dr. Peter Gergen (Undergraduate Biology) to promote engagement in research. In spring semester of his freshman year, Nathanael fortuitously contacted Prof. Paul Fodor (Dept. of Computer Science), who agreed to mentor him during summer 2019 as a participant in the PSEG-Explorations in
STEM, a 10 week summer research program co-administered by the Career Center and URECA ( PI: Dr. Monica Bugallo, Electrical and Computer Engineering, WISE).

Working with his mentor Dr. Fodor on Knowledge Representation and Reasoning (KRR), an area within the artificial intelligence (AI) field, Nathanael became immersed on “Applications of Knowledge Authoring Logic Machine (KALM) on bAbItasks,” an updated knowledge authoring system capable of commonsense reasoning. He continued working with Dr. Paul Fodor, as well as Dr. Michael Kifer (Computer Science) during his sophomore year, and this past summer, again participated in summer research through the PSEG-Explorations in STEM program. Working remotely in summer 2020, Nathanael designed and integrated an updated parser based on Stanford CoreNLP into KALM and presented “Knowledge Authoring Logic Machine (KALM) from Adaptive Natural Language”, a more powerful KALM that can read and understand a greater magnitude of English, at the 2020 virtual summer symposium  that included presentations from REU and Explorations in STEM students. Nathanael will be continuing to do research with Dr. Fodor’s group to engineer existing knowledge authoring framework and natural language processing systems on new ontologies. He has participated in tutoring and extracurricular activities with the ACM Stony Brook Computing Society, and works as a Client Support Student Technician on campus with Stony Brook University DoIt. Nathanael’s long term plans are to pursue graduate study in computer science.

Nathanael is a first generation college student and a graduate of Brentwood HS, Brentwood, NY. Nathanael’s hobbies include music, reading and hiking. Below are excerpts of his interview with Karen Kernan, URECA Director.

Karen. How did you first get involved in research?

Nathanael: In the summer before my freshman year,  there was a CSTEP intro-to-college program that I participated in. The program was only four weeks but we got to learn a lot about research, research ethics, how research is conducted… and we got to present a poster at the URECA summer symposium. And at that point I realized that research is something that I was interested in.

Mostly I liked it because it's a collaborative environment. You're always learning something. It felt pretty exciting even though it was only four weeks...And there were actually a lot of speakers, including grad students, who came in and  spoke about the research that they were doing. I thought it'd be something fun to try for in the following summer.

I also did INSPIRE in my freshman year… I was paired with Jared Ocasio, a biomechanical engineering major, who had a similar background to me. And he told me about the URECA program, showed me how to apply, how to contact different professors, and find out more about their research. So that was also interesting and helpful .

After you had decided to apply for URECA, how did you go about finding a mentor?

My mentor was actually recommended to me by the first professor I met with, Professor Aruna Balasubramanian. Although her lab was then full, she asked me about my interests, and mentioned that Professor Fodor might have some spots available over the summer. So I set up a meeting with Dr. Fodor to speak with him about his research and about possibly mentoring me in the summer. He had mentored someone previously in the Explorations in STEM program, and said, “of course.” And I’ve been working with him since... After I met with him initially, he basically just told me that I should learn more about the work he's doing--and do a paper review to get started and get familiar with the research.

Tell me about your project.

So what we're focused on is Knowledge representation and reasoning, which is a subset of AI. Basically Knowledge representation and reasoning (KRR) systems encode knowledge as facts and rules.This knowledge can then be queried in sophisticated ways and, unlike machine learning approaches, query answers can be explained to human users. This technology has been hindered by the fact that specifying the requisite knowledge requires  skills that most domain experts do not have, while skilled knowledge engineers are in short supply. ...The Knowledge Authoring Logic Machine (KALM) provides a path to solve these problems with high accuracy. KALM allows one to disambiguate parses and identify semantically similar parses.However, KALM still has a number of limitations including: It cannot standardize rules, It understands only the present tense, and does not handle time-related information, It insists on certain syntactic forms, which are too burdensome for most users, It does not handle commonsense background knowledge implied in English sentences. I am currently working on incorporating a general CoreNLP parser into the KALM framework to extend the capability of KALM and the language it accepts.

As someone who has been working on this and related projects for~ 2 years now, what was the learning curve for you?

I’d say my role has definitely evolved as I’ve gained familiarity with the field. When I first began the project, I started out by doing a lot of background reading and “paper research”-- just learning about the field. Later when the PhD student in our group was about to graduate ...I started to take on more of an independent role working in the group, with me, Professor Fodor and Professor Michael Kifer. I started to do more of the coding and working on the actual project itself.

I think I was really kind of anxious or a little bit stressed when I first started…because there was always something to learn again.  I felt like I never really learned enough. But at this point, I've gotten more used to the pace of everything and I've become okay with it. Doing the research--It's so interesting. So even though sometimes you might spend weeks perhaps going in the wrong direction and then have to start over from scratch on some other theory, it’s still enjoyable. It  might get frustrating at times, but it's still useful knowledge. It’s something I want to spend my time doing.

What have you learned from doing research that you wouldn't learn from just classes alone?

For any class projects or homeworks, you work with other students. But in the end, there's always a solution. There’s an answer, a straightforward way to do it. But when you're doing research, sometimes it's so open ended. So it's really insightful to see how the professors (who have been doing the work for 20+years) approach these problems,  these really big open ended problems. How they work together has really shown me a lot about how to work collaboratively on a really hard problem...

Apart from the funding, what are some of the advantages of participating in a summer research program? What for you has been most useful?

One of the workshops I know I found really helpful was the workshop, presented by Dr Navid Vafaei-Najafabadi (Physics)on IDPs/Individual Development Plans-- where he spoke about research and science careers, and time management. I’ve actually made my own IDP ..and I’ve been making changes to it. I've also been researching more science careers that  I previously wasn’t aware of …Also, presenting has been helpful. Doing it virtually this summer was definitely hard. Overall, though, I feel like I’ve gotten better at communicating ideas …explaining the research I've done, and trying to break it down into simple terms that people can better understand.

How has your mentor helped you?

He's been super helpful …In terms of the research, he's been really patient with me. He’s  given me advice, for example, reminding me to make sure not to burn out, and to take breaks here and there. He’s also given me specific advice on what  programs I should be looking at, for graduate school...and lots and lots of super helpful advice about my classes and schedule.

What advice would you give to other students about research?

To say “get involved” is basic. But you do need to start by talking to your professors …by getting familiar with URECA, or other programs like INSPIRE that can help you. For me, the CSTEP program was very helpful because they told me a lot about the different programs available on campus--including scholarship funding.   Once you get familiar with one program, you kind of naturally get pushed towards more opportunities, including research. My peer mentor for the INSPIRE program was actually my mentor for the CSTEP program before that. He told me to apply for INSPIRE, and to apply for URECA/Explorations in STEM . So I kind of naturally went from CSTEP to  INSPIRE to URECA.

How many hours a week would you spend on research activities when you're in school?

Usually between 8 to 12 hours. Sometimes it's hard to prioritize .. should I do class work first or research first?  I used to procrastinate on classwork by doing research because I just would rather do research than do some homework. I think it goes back again to time management… learning how to prioritize what you should work on first, and what comes next. It becomes easier to manage everything once you learn this.

Staying up to date with current research …sometimes I’ll be researching papers, not realizing that the papers are older or outdated. That happened to me in my first week of research--where I was studying papers that were five years old.

What do you most enjoy about research?

Probably it'd be the meetings where we solve a really hard problem. I remember a few of those meetings happening when we were in a transition period with the PhD students … when I had to take a more hands on approach and we were actually writing on the whiteboard , crossing things out, circling things.. It was one of those stereotypical computer science problem solving moments…..when we actually figured out a lot of things. It felt really authentic. And I really felt that I was able to contribute. Usually it’s the professors who are teaching me things...but in moments like that, I am working with them, solving problems with them. And it feels really different and special.

Yes, that’s the stereotypical view of Software Engineering … working in isolation… coding by yourself… I knew that I didn't want that. What I enjoy most about research is working in a group. That's why I  continue to pursue it. ... it's something that's fun and interesting and usually, it’s a collaborative thing. That’s what is so great.