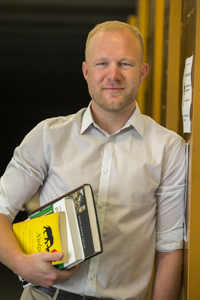 Does someone’s confidence in their ability to reliably earn income affect their views on welfare redistribution? This is one of the questions asked by Ben Carter, a political science major in the B.A./M.A. in Public Policy program.

Ben is this year’s recipient of the Angela & Dexter Bailey-URECA summer research award which supports his project on “Taxation preferences as a function of income volatility” via an experimental economic game. This project developed from an independent study course he took last fall under the mentorship of Dr. Peter De Scioli in the Department of Political Science where he did extensive readings on political science, behavioral economics, and evolutionary/political psychology. To design his experiment on social welfare and wealth redistribution preferences, Ben is able to draw upon his background in web programming and statistical software. Since last fall, Ben has also been working as a volunteer research assistant with Alessandro Del Ponte, a graduate student who works with Dr. DeScioli in the Center for Behavioral Political Economy.

Ben spent most of his early years as a Floridian. He transferred to Stony Brook from Suffolk Community College, where he developed a fascination for political science and political philosophy. He enjoys biking, hiking and tennis, and listening to TED talks. Below are excerpts of his interview with Karen Kernan, URECA Director.

Karen:  What is your research project about?
Ben: My project looks at how people’s support for redistributive tax policies relates to their exposure to economic risk. The variable I focus on, one which I think could be a significant factor, is the level to which a household’s income is variable or volatile. And so, in addition to doing a literature review about experiments on taxation, evolutionary and political psychology about wealth redistribution, etc., I am working to create an economic game that will allow us to study political decisions by looking at various participants’ exposures to economic risk.

How did this project evolve? Did you take a class where you started exploring these issues?
It was mostly curiosity…and my interest in getting involved in research. About a year ago, I didn’t know what research entailed per se. When I started to look up different research interests of faculty in the Political Science department, I found Prof. DeScioli’s area of research to be fascinating. We met a couple of times and we hit it off, so we embarked on a semester of directed research last fall where he would give me free rein to explore certain topics and I would come up each week with a paper or an experimental idea and he would give me feedback. He was great at giving feedback. I worked hard, but it also was a kind of intellectual playground where I could explore whatever topic I wanted to look at. By the end of the semester, we honed it in to a semester project proposal that included a methods section and plan for data analysis—and that final project essentially became the proposal I submitted in the spring for URECA. At the same time that I started the directed research course, I also started working as a research assistant with PhD student Alessandro Del Ponte, in the Center for Behavioral Political Economy.

When you first came to SB –did you know what you wanted to study?
I did. I came to SB from Suffolk Community College. When I was there – I had a great political science professor who really got me focused on government and public policy.

What are your long term plans?
I’m currently in the 5 year program with the public policy. … I’m still reflecting on what I will do after that, still trying to crystallize my goals. I am considering law school, my original goal; and I’m also now considering PhD programs.

Did you know about the MAPP program when you first came to SB?
No, it was a lucky accident. One day, I was walking on the 7 th floor of the SBS building and got lost – looking for a certain office. And I ran into Prof. Salins. We started having a conversation and I mentioned to him that I was interested in research/think tanks … And i turned out that he’s the director of the public policy program. So he told me more about the program, and really illuminated the scene for me. After that week, I signed up for the program—a program that I feel really lucky to be part of.

How have your skills developed through the process of doing research?
I read a lot of material when I started last fall. I probably read more during the semester of directed research than at any other time. And there were definite outcomes. My score for LSAT went up by 8 points just because I was able to move through the reading comprehension much quicker. Aside from that, I’ve had the chance to use lots of computer skills. I’ve learned to use Stata, a statistical modeling program, and sharpen my computer programming skills in html and I’m learning java script right now. More importantly though, it is just cool to be part of running laboratory experiments because you get to see from behind the glass what’s going on. I’m sure I have a much better understanding now of what graduate school entails.

What advice would you give to other students?
The best thing is to do some sort of research. It’s a super enriching experience and has helped me more than any one class could have. It also looks great on your resume – no matter what your goals. So I’d say to look at the faculty research interests on the department’s webpage –and just send an email or arrange to meet and talk with some professors. If it goes the way it did for me, I found Prof. DeScioli to be incredibly receptive. He’s been an awesome mentor to me, guiding me through this project. I had a lot of freedom to pursue any avenue I was interested in. And Alessandro, my graduate student mentor, is also great. He’s become kind of like a big brother to me, always willing to give advice and to help me – even with things like writing a CV.

Are you enjoying the opportunity to do research in the summer?
It’s been great. This is the first time in my life that I am able to fully just engage in the project and not have to work part time or full time.

Do you experience times when the research doesn’t seem to be progressing?
I recently went through a period that was frustrating. But I’d say that intellectual modesty, and being able to check your ego at the door is very important. Sometimes you have to learn through being wrong. You have to be receptive and willing to receive helpful feedback and sometimes the feedback may undermine previous conceptions that you had.
But by far, the learning experience and the “aha” moments have outweighed the frustrations.  For me, it was a thrill to find literature that supported my ideas on the topic – about how income variability manifests in the real world.

Was it difficult to narrow down the topic for your project?
That was tricky but awesome to learn. When I first started last fall, I wanted to write about these very broad topics—essentially to make a theory of everything. It took time to learn that you have to pick one thing and zero in on one aspect of what was going on. Prof. De Scioli was really helpful with that.

Is there anything else you’d like to add?
Thank you to URECA and to Angela & Dexter Bailey. Thanks for the opportunity to pursue this project. The coolest thing is …I picked what I’m doing. For the first time, I was able to receive an award and am able to  pursue exactly what I want to look at with amazing mentorship. I’m very grateful for the award. . .and I definitely encourage more students to apply.