Tribute to Mikis Theodorakis: A Celebration of Life Sunday May 1st, 2pm at the Union Auditorium

Ministry of Education and Religious Affairs 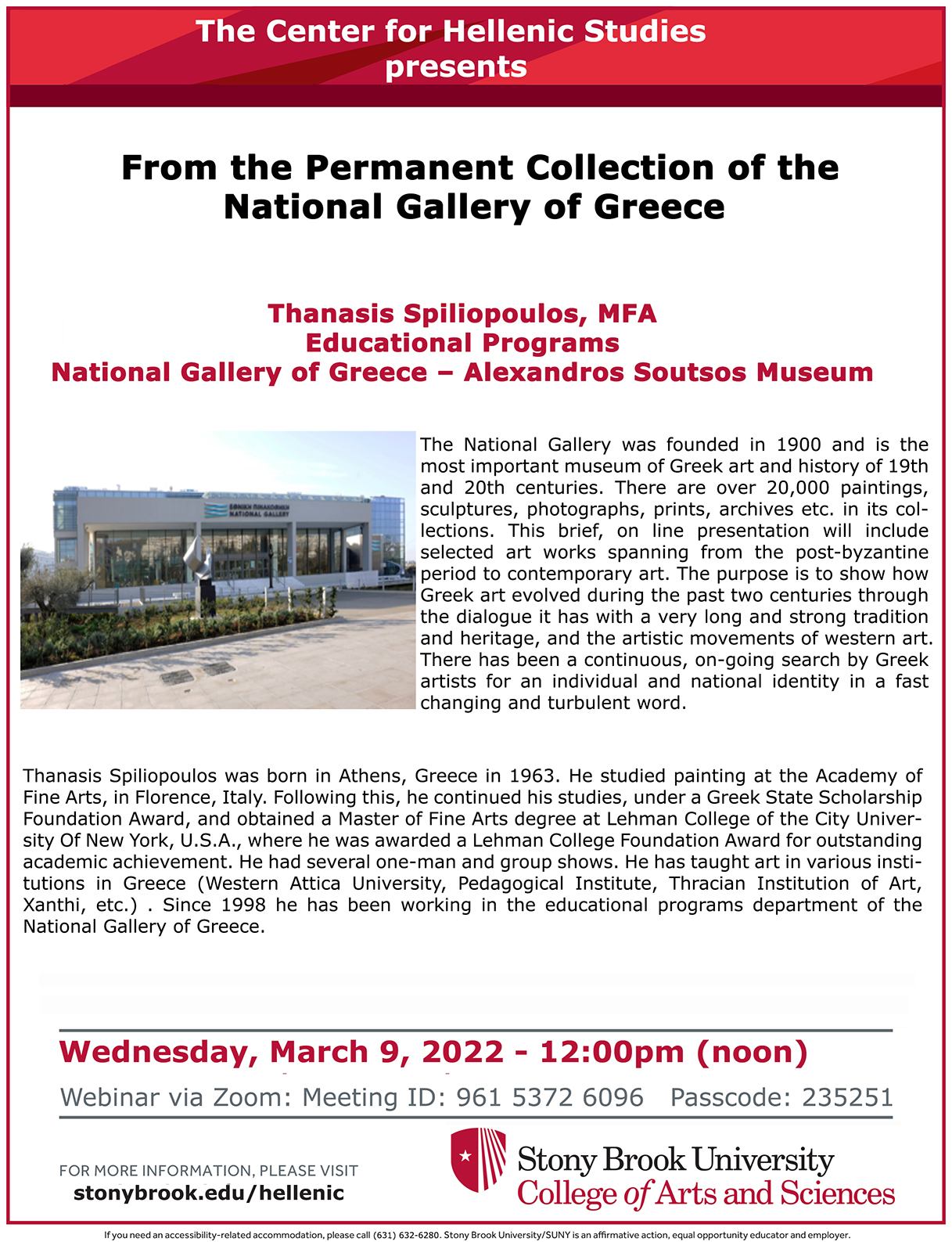 Lecture Title: 'Primal Loss: Four Hundred Years of Orpheus and Eurydice in Opera'. The lecture will be following by a recital with selections performed by soprano Liv Redpath. The performance will take place at the Staller Recital Hall. Matthew Aucoin's opera Eurydice will premier at the Metropolitan Opera in November 2021. 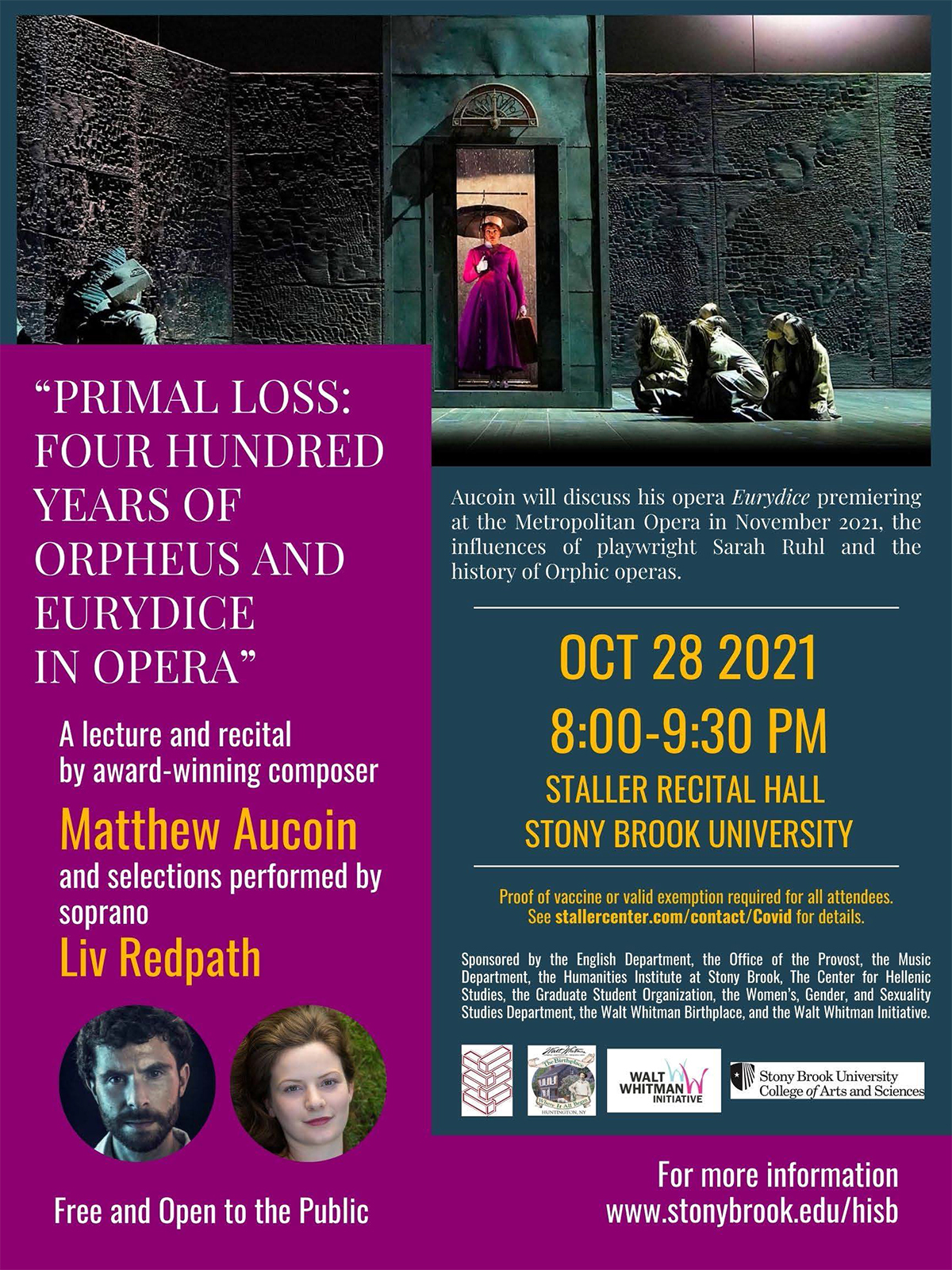 - October 29 th, 7.30pm: The Stony Brook Greek and Cypriot Club hosts this year's OXI Day celebration. The event is open to family and friends. Please come to SAC Ballroom A to celebrate with our students. Title: Slaying the Dragon: Byzantine Survivals in the Greek War of Independence 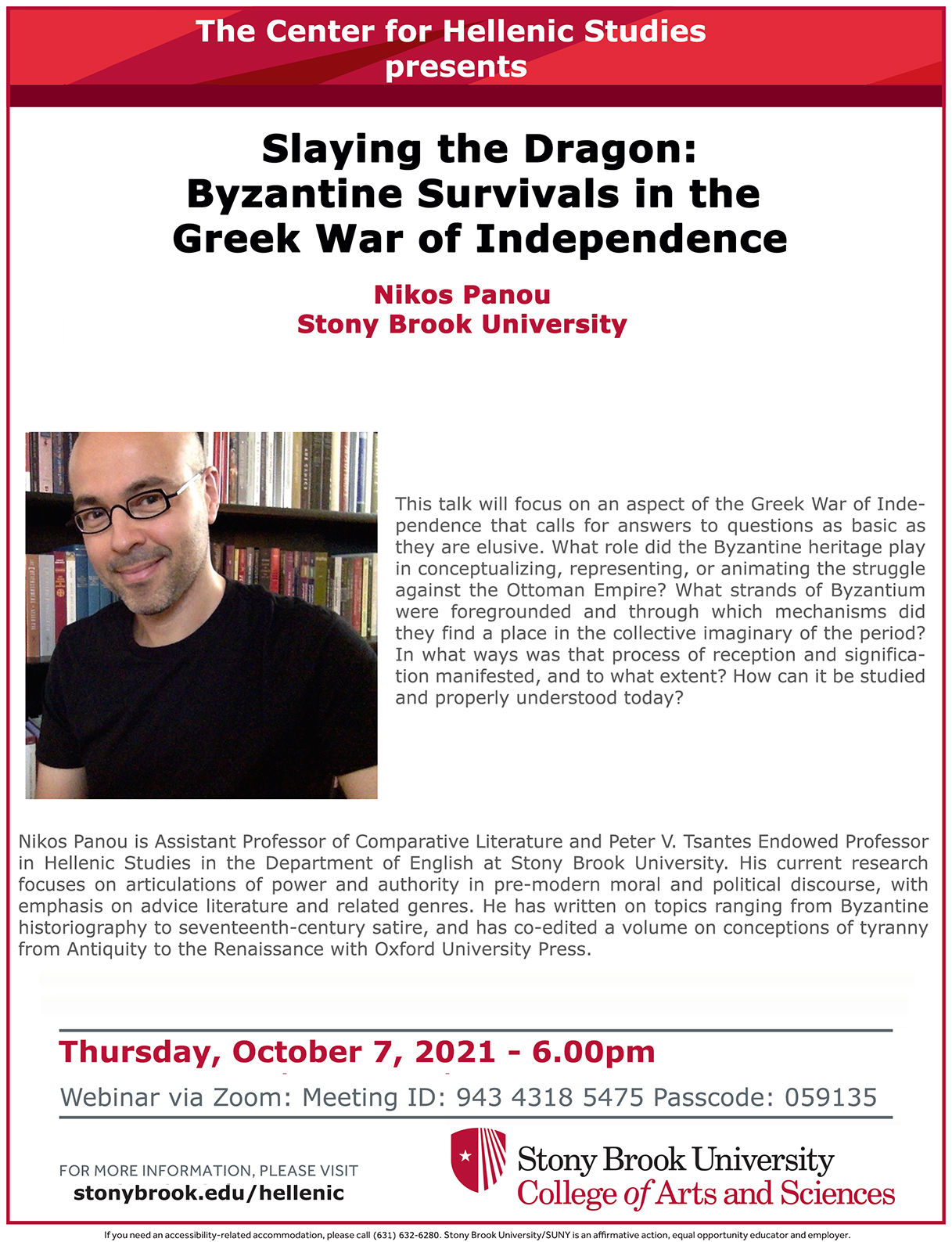 - ‘Reading is Education. Education is Wealth’. Books for the Education of Greek Americans at the Beginning of the 20th Century, by Prof. Maria Kaliambou (Yale University); Monday March 29 at 6pm

- 'Digging Homer. The Mycenaean Palace at Iklaina and the Creation of Greek Epic Poetry', by Prof. Michael Cosmopoulos (University of Missouri-St. Louis); Wednesday November 11 at 6pm 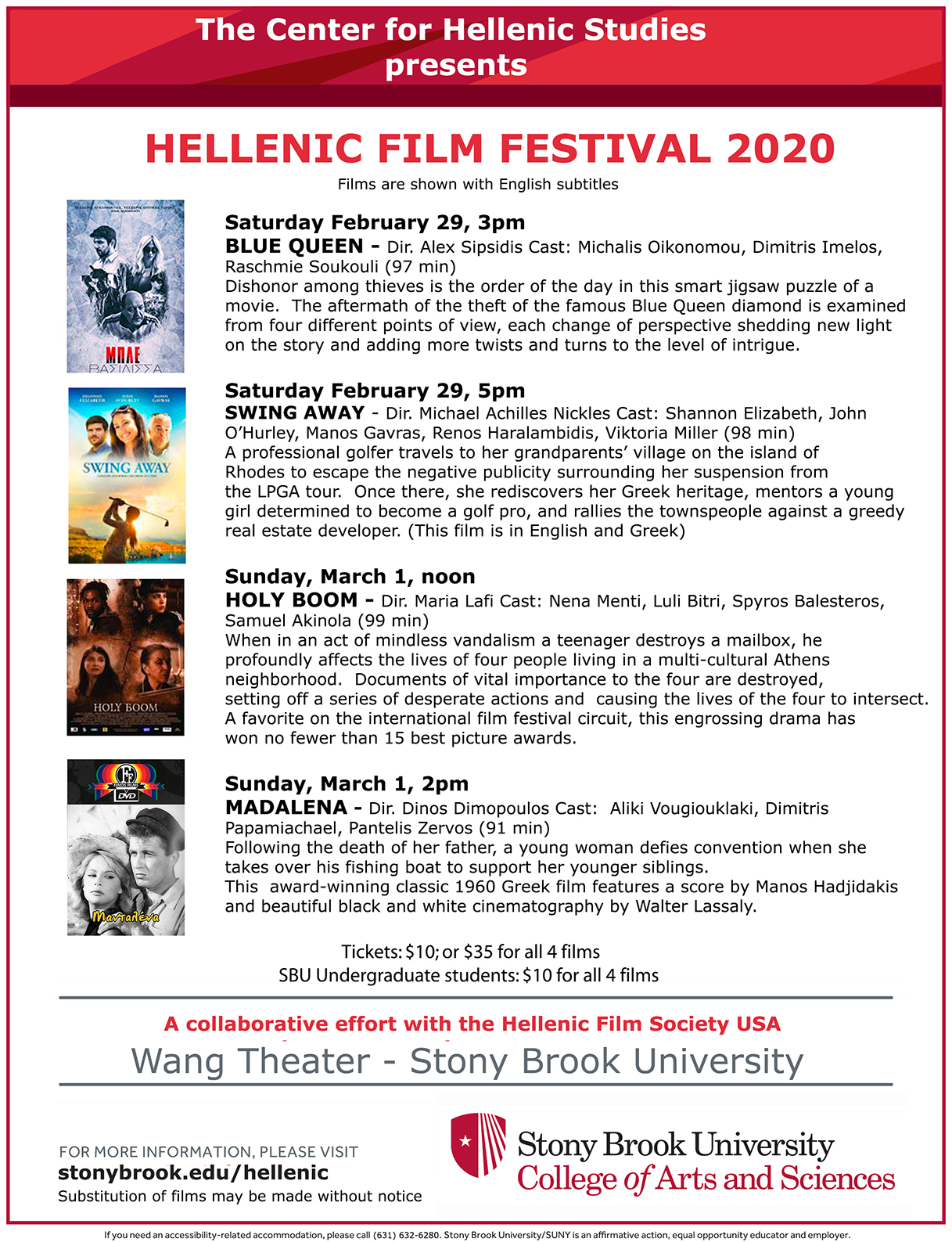 'Cyprus Under British Rule: Culture, Politics and the Movement Towards Union with Greece' , by Prof. Christos P. Ioannides, Director of the Center for Byzantine and Modern Greek Studies, Queens College

Honoring the anniversary of October 28,1940

'The Hidden Correspondence of Eva Palmer Sikelianos in Paris and Athens: Archiving the Intimate Materials of a Life', by Prof. Artemis Leontis, University of Michigan

March 14th 2019, at 4pm in Humanities 1052 – 'Writing the Self in Mediterranean History', by Prof. Konstantina Zanou, Columbia University

- Tzamaika  (Τζαμάικα), a 2017 movie by director Andreas Morfonios. A moving, tender, optimistic and highly humorous film about the sweeping power of life and the brotherly love that surpasses all the misunderstandings of the past.

- Love Struck  (Από Έρωτα), a 2014 movie by director Thodoris Atheridis. A love story with unpredictable twists and turns between perception and reality, love and its complications and the faults of human nature.

- The Other Me (Έτερος εγώ), a 2017 movie by director Sotiris Tsafoulias. A lonely criminology professor attempts to solve the mystery behind five murders by decoding the puzzle of five Pythagorean theorems. Alongside him on this journey is a math professor.

- Kazantzakis  (Καζαντζάκης), a 2017 movie by director Yannis Smaragdis. Biographical film of the fascinating story of the life, travels and dreams of the great ecumenical Greek writer Nikos Kazantzakis. 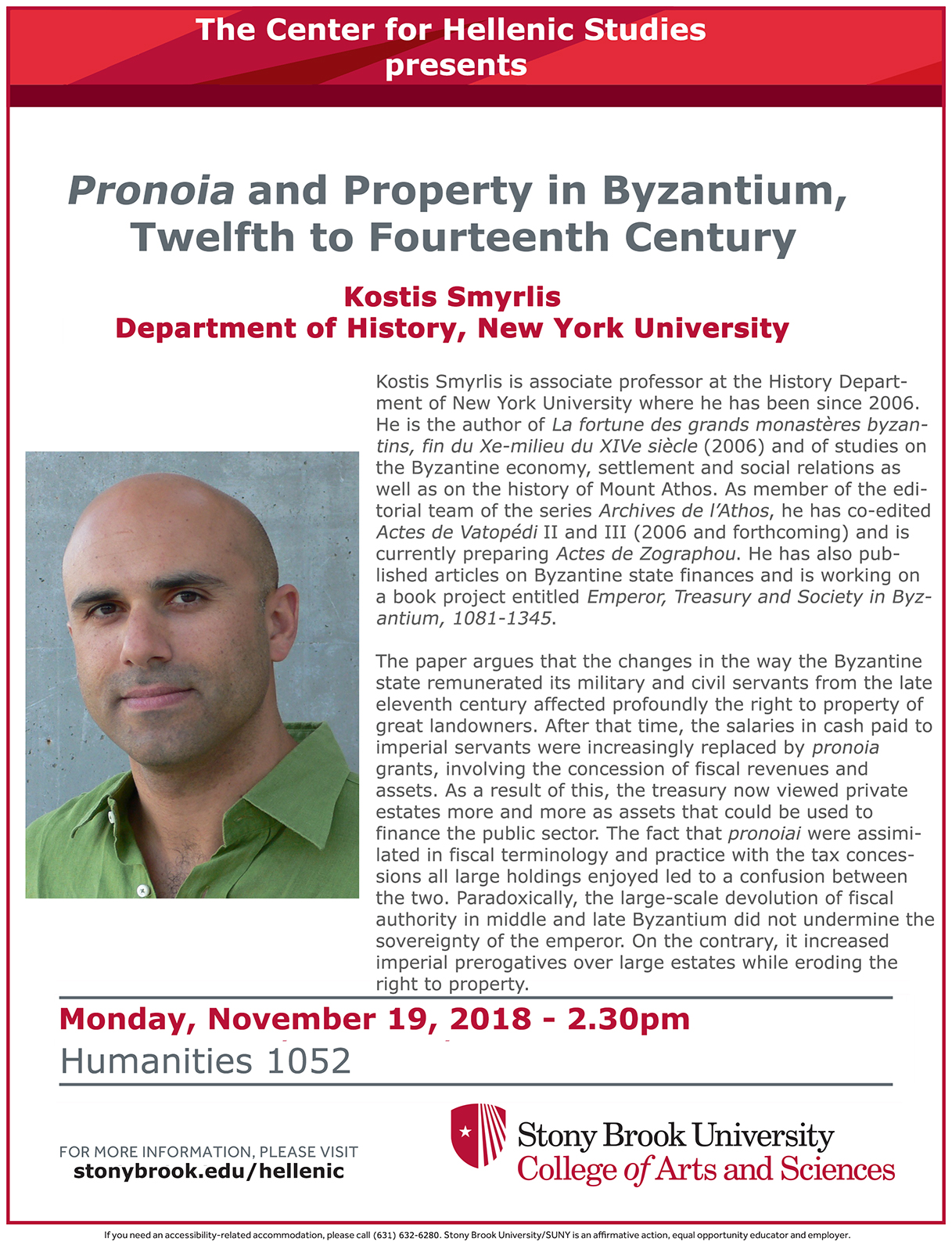 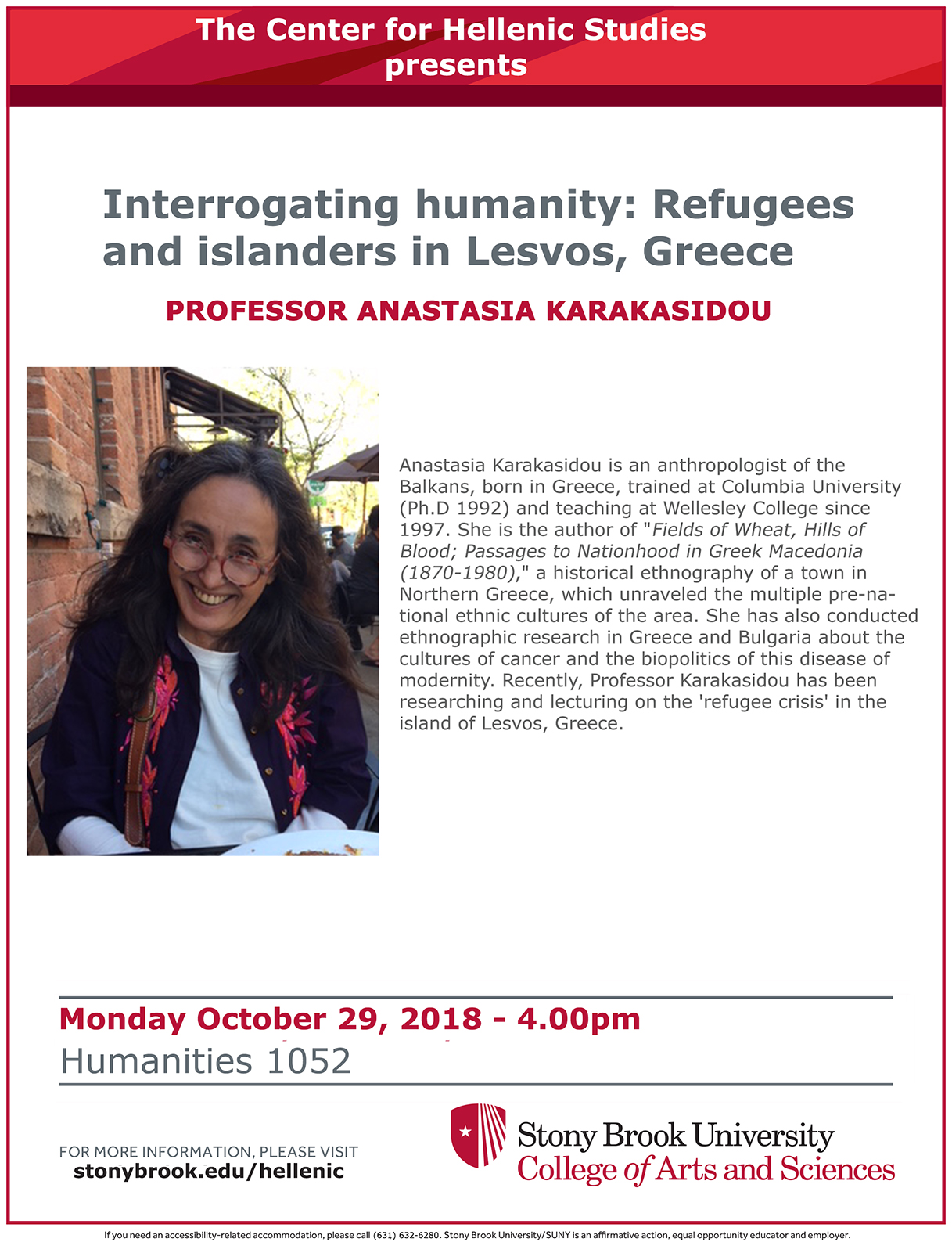 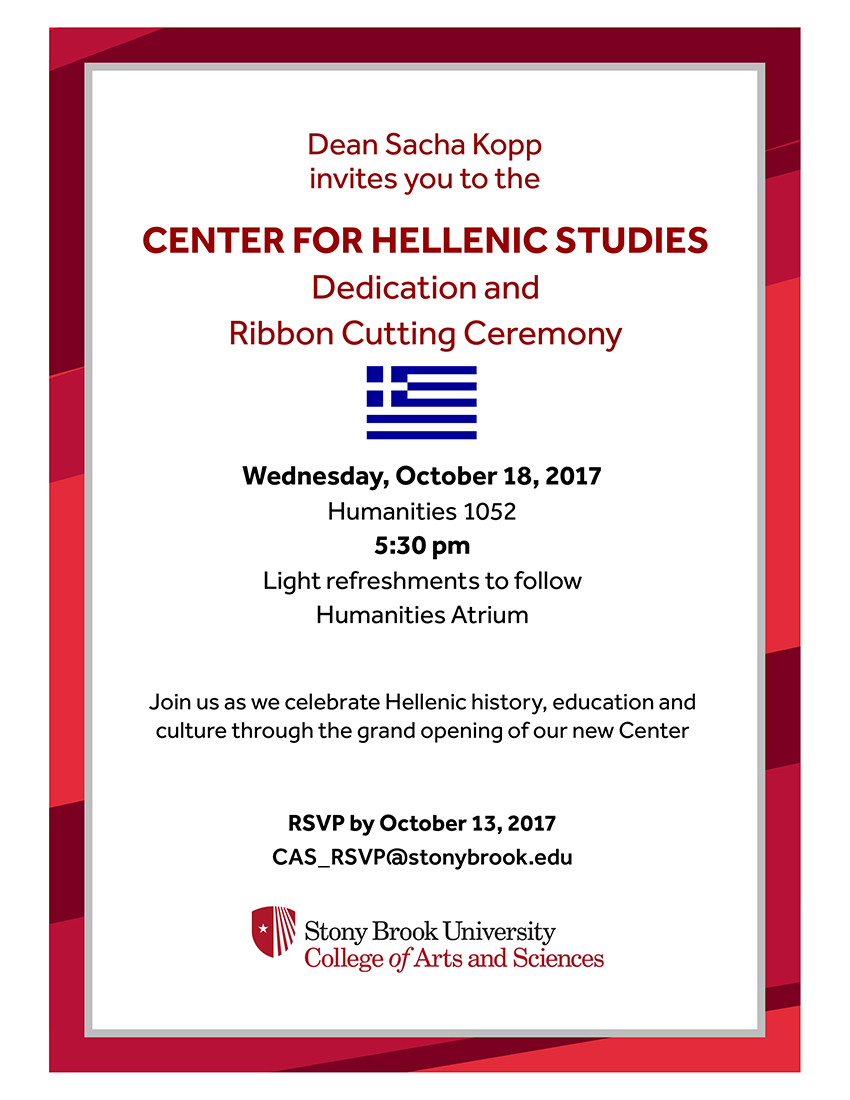 'The Allure of Panic after Nietzsche'

'Homo Auctor: Orphans, Merchants and the Making of the First Greek-American Citizen in the Nineteenth Century'
By Prof. Nikos Poulopoulos, University of Missouri-St. Louis

President of the Ivy-Plus Consortium for Language Teaching and Learning

'Everyone Has a Story to Tell: Digital Storytelling and Critical Pedagogies'

"Kisses to the Children" a documentary by Vassilis Loules

Discussion with the director after the screening

Lecture Hall 1 at the Wang Center

"The Scapegoat" by Sophia Nikolaidou

Discussion with the author and the English translator (Karen Emmerich)

The Post-War Origins of the Cyprus Question

The Ward Melville High School chamber orchestra performed at the Greek Church of the Assumption on Wednesday, Nov. 19 at 7 p.m.
This is a tremendous honor for the students, and the community is invited to attend. The church is located on Sheep Pasture Road in Port Jefferson.

The Greek & Cypriot Student Association of Stony Brook University proudly presents the “OXI” Day Celebration, on October 28th, at 7:30PM at the Student Activities Center, Ballroom B. The event will include a presentation about the history of the day, poetry readings from students and dance performances of Greek traditional dances by the wonderful Rythmos Dancers. Snacks will be served. We would be honored if you could join us in celebrating this important day of the Greek history.

and The Mikrokosmos Ensemble

Dr Demetrios Anglos, Associate Professor of Chemistry at the University of Crete and Associated
Researcher at IESL- FORTH

Dr Phoevos Panagiotidis: Why teach Greek and how

Dr Nikos Panou: From the Stables to the Throne: was Basil I the Perfect Byzantine Emperor?

Professor Michael Cosmopoulos: Searching for the cities of the Trojan War: the excavation of a
new early Greek palace at Iklaina

Maria Iliou's recently produced documentary "Smyrna: The Destruction of A Cosmpolitan City, 1900-1922"
will be shown on Friday, November 15, 7-9:30 PM at the Wang Center (Theater). The documentary is free to the public.

The documentary's director, Maria Iliou, and the historical consultant of the documentary, Dr. Alexander
Kitroeff, will join us that day and answer questions by the audience in the last 30 minutes. The documentary will be screened at 21 Modern Greek Studies Programs at selected US and Canadian universities during fall 2013 and winter 2014; the program at the University of Illinois has the honor to be one of those. This screening was made possible by a generous sponsorship from Stavros Niarchos Foundation.