The Science of Science Communication

Climate change, the COVID-19 pandemic, gene editing, artificial intelligence, and other technologies all have one thing in common. The conversations surrounding them and other science-based issues are often overwhelmed by controversy and conflicting perceptions that are reinforced by a lack of public understanding and action.

Increased calls for improving science communication have come from political bodies (Federal Ministry of Education and Research, 2019), stakeholders, scientific academies and associations (AAAS, 2020), science funders (SNF, 2020), and others in recent years. Upon answering this call, a plethora of science communication formats and activities came about. This includes public presentations, science festivals, participatory workshops, science cafes, media appearances, Facebook posts, and, most recently, TikTok videos. The world of science communication seems to have endless opportunities for dialogue between scientists and the public.

Many of these activities emphasize the importance of scientific evidence, and, with it, the importance of a system that produces said evidence. Fischhoff and Scheufele (2013) argue that the knowledge produced by science represents the “best available evidence” for many individuals, organizational and societal decisions, and that science communication should strive to make this knowledge widely available.

Communication is a two-way process, in which scientists must listen as well as speak, if they are to identify the most relevant information and assess their success at conveying it.

The science of science communication is an ever-growing, interdisciplinary area of research that looks at how to best communicate science.

There are hundreds of studies looking at how not only scientists and scientific organizations, but also NGOs, think-tanks, and other institutions strategically communicate about science. Additionally, the research includes the portrayal of science in the media, how science-related issues are discussed online, which audiences these discussions reach, and the behavioral and attitudinal effects they have, among other topics.

A number of handbooks (Oxford handbook, Leßmöllmann et al., 2020, Massimiano and Trenc, 2019) have been published that summarize findings from the field. Specialized journals have  emerged, such as “ Public Understanding of Science”, “ Science Communication” or “ JCOM – Journal of Science Communication”. The international “ Public Communication of Science and Technology” Network (PCST) is devoted entirely to both research and practice of science communication, with annual conferences that attract hundreds of participants. Even the National Academy of Sciences hosted its second Sackler colloquium on this topic to advance a national dialogue.

Communication scientists can be found in disciplinary departments, such as psychology, sociology, and political science. Some are in interdisciplinary ones, such as geography, business, and public policy. Some departments include scientists who view themselves in both ways.

The communication of science is held to the same standards as the science being communicated. It should be informed by existing science (e.g., studies of how to avoid confusion between correlation and causality), rather than just intuition. It should subject itself to empirical evaluation, recognizing that even the best behavioral and social science cannot confidently predict human behavior in complex, novel settings.

Evidence-based science communication should combine the best available evidence from research, that’s established theory, as well as practitioners' acquired skills and expertise, reducing the double-disconnect between scholarship and practice.

Hallman, W. (2017). What the Public Thinks and Knows About Science – and Why It Matters of the Oxford Handbook of Science of Science Communication, 2017.

What is the “science of science communication”? Dan M. Kahan

The science of science communication by Baruch Fischhoff and Dietram A. Scheufele 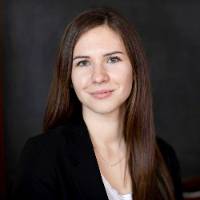 Claire Holesovsky is the Science Communication Specialist in the Alan Alda Center for Communicating Science and is affiliated faculty in the School of Communication and Journalism at Stony Brook University. Her research focuses on public attitudes towards policy surrounding controversial science, scientific decision-making, and public engagement with science. She received her MS and BS in Life Sciences Communication from the University of Wisconsin-Madison.

The Alda Center
@AldaCenter May 18
Which was the happiest cast and crew Alan Alda ever worked with? Find out when you purchase your pass to the @alanalda Film Festival : five of Alda's favorite films and his memories from each film. May 20-25. Presented with @StallerCenter https://t.co/ODJlfWILEv

The Alda Center
@AldaCenter May 17
It's not too late to register for The Essentials - the #aldacenter signature online science communication training program. Sign up now for the #scicomm workshop on Friday! https://t.co/DHMiavofaa https://t.co/2zKK6EI5On

The Alda Center
@AldaCenter May 17
Find out who was left out of the credits during @alanalda's film "Sweet Liberty." The beloved actor, writer and director shares trivia, memories, and favorite moments during our upcoming Alan Alda Film Festival, May 20-25, presented with @StallerCenter https://t.co/ODJlfWILEv https://t.co/pN3no8QB3d

The Alda Center
@AldaCenter May 16
Public Health Professionals: Learn to connect with diverse audiences in crisis through this free online course - learn more and sign up: https://t.co/WrMTLs17Vt https://t.co/g7yBskScRb

The Alda Center
@AldaCenter May 15
Register today for The Essentials, our fundamental #scicomm program for scientists & researchers. Learn to build trust, connect with others, and share the significance of your work in this 3-hour online program https://t.co/DHMiavofaa https://t.co/vEMjZGVX6v

The Science of Science Communication