Unfortunately, the weather will likely keep us from seeing as many crabs having sex as we hoped. For the second night in a row a cold, steady wind blows across the Peconic Bay, whipping its usually calm waters into small swells. Granted, for human beings these are just tiny waves, barely ankle height by the time they hit the shore. But if you're a horseshoe crab looking to spawn, these miniature whitecaps could be downright deadly.

As my colleague Abigail Costigan explained to me earlier, if a wave flips one over, their only recourse is to try and flip back with the use of their rigid tails (called telsons) before the tide recedes or a predator strikes. So conditions like this weekend's keep most of the horseshoe crabs in the area from coming too close to shore. Abigail is a marine conservation and policy master’s candidate at Stony Brook who's working with the Peconic Estuary Partnership to study what types of beaches horseshoe crabs prefer for spawning. So she’s spent plenty of nights counting dozens upon dozens of them as they pile on each other attempting to spawn. But the previous night we saw only a few mating pairs, illuminated by the beams of our flashlights and recorded in her log, across the three beaches we surveyed. So far tonight we've only seen a solitary male scuttling a few feet off shore. Nothing like the arthropod orgies we hoped to see.

For most people a fun night on the beach involves things like barbecues, bonfires, and moonlit swims. But for people like Abigail it means slowly trudging through the surf in rubber boots in search of prehistoric creepy-crawlers. And she enjoys every minute of it. As she put it during our midnight drive out to the beaches, "There's so much to learn about them beyond what you'd think." These little, ten-legged tanks with tails are considered "ecosystem engineers" due to the wide array of ways they shape and add value to coastal ecosystems. They’re messy eaters and the scraps they leave behind after consuming their prey (worms, algae, clams, etc.) feed other crabs, their movements across the sea floor stir up sediments and nutrients, and their eggs provide food for a variety of marine predators including a species of red knot, a migratory seabird listed as "threatened" under the Endangered Species Act.

While the horseshoe crabs themselves are not in peril of extinction, a severe depletion of their populations over recent decades has undoubtedly spread harmful ripples through the complicated marine food web. "Do we have a sustainable population of horseshoe crabs? Yes," says Abigail. "But do we have enough horseshoe crabs that they're doing all of the things that they could be in terms of ecosystem function? No." And why not? In short: because of us. Installing seawalls and hardening shorelines eliminates huge swaths of spawning area. Humans have also collected and killed them for multiple purposes over the years, including for use as fertilizer up until the 1970s. They're used as bait, including by the local eel and whelk fisheries which are themselves in trouble. But one of the biggest industries behind the direct deaths of many horseshoe crabs over the last fifty years is a surprising one: medical research.

It’s All About LAL

From pacemakers to stents to the very COVID vaccine I had three wonderful doses of last year, the viability of nearly everything a medical practitioner puts into a human body relies on an extract from horseshoe crab blood. Limulus amebocyte lysate (LAL) functions in the closed circulatory system of horseshoe crabs much like our white blood cells, and is used to test any device or medicine that will interact with the human bloodstream.

After crabs gathered for this purpose are caught, labs extract 30% of their blood and return them to the ocean, operating something like involuntary blood banks. Since the bled crabs are eventually released with most of their blood, for years scientists have claimed that the vast majority of crabs survive the procedure. More recently, scientists have begun to examine those claims as a vast underestimate. A growing consensus says that the mortality rate is nearly a third, a figure that Abi believes is itself another underestimate. And that’s just counting the crabs that die before they’re released. The estimates don’t even take into account animals that die or suffer health issues after they're returned to the water which could be even higher. Abigail draws an illuminating comparison: "When you go to donate blood, they take about 10% and you feel like shit. Now imagine they take 30% and just dump you back on the street." So it's likely this practice kills far more horseshoe crabs than previously believed. And while a synthetic alternative has been available for nearly twenty years and is used throughout Europe, it was only approved for use as an alternative by the FDA in 2019.

Horseshoe crabs are as important to both humans and the ocean as they are weird looking. Which is why Abigail and I are out here wading through the chilly waters of the Peconic. And we’re not the only ones. Scientists and volunteers stalk beaches up and down the East Coast searching for crabs to count in order to further our understanding of how they live, reproduce, and how things like the rising of sea levels and temperatures may affect them. Any readers interested in helping need only some free time and an app courtesy of Cornell University. And anyone looking to learn more should absolutely attend Abigail’s upcoming talk at the Montauk Lighthouse Museum: “Sex, Drugs, and Living Fossils.” When one looks at just how vital these ecosystem engineers are and how little we understand the damage being done to them, the value of tracking and studying their comings, goings, and spawning becomes clear. Even on a night when expectations of finding them are low, folks like Abigail are out on the beaches patrolling with hopes of furthering our knowledge about them bit by bit.

And as we near the end of our final beach for the night, the beam of Abigail's flashlight finally finds what we've been seeking: a pair of crabs a few feet from shore, the smaller male atop the larger female, doing what comes naturally despite the weather. They're marked down in the log, another important little piece to better understand the under-appreciated horseshoe crab. 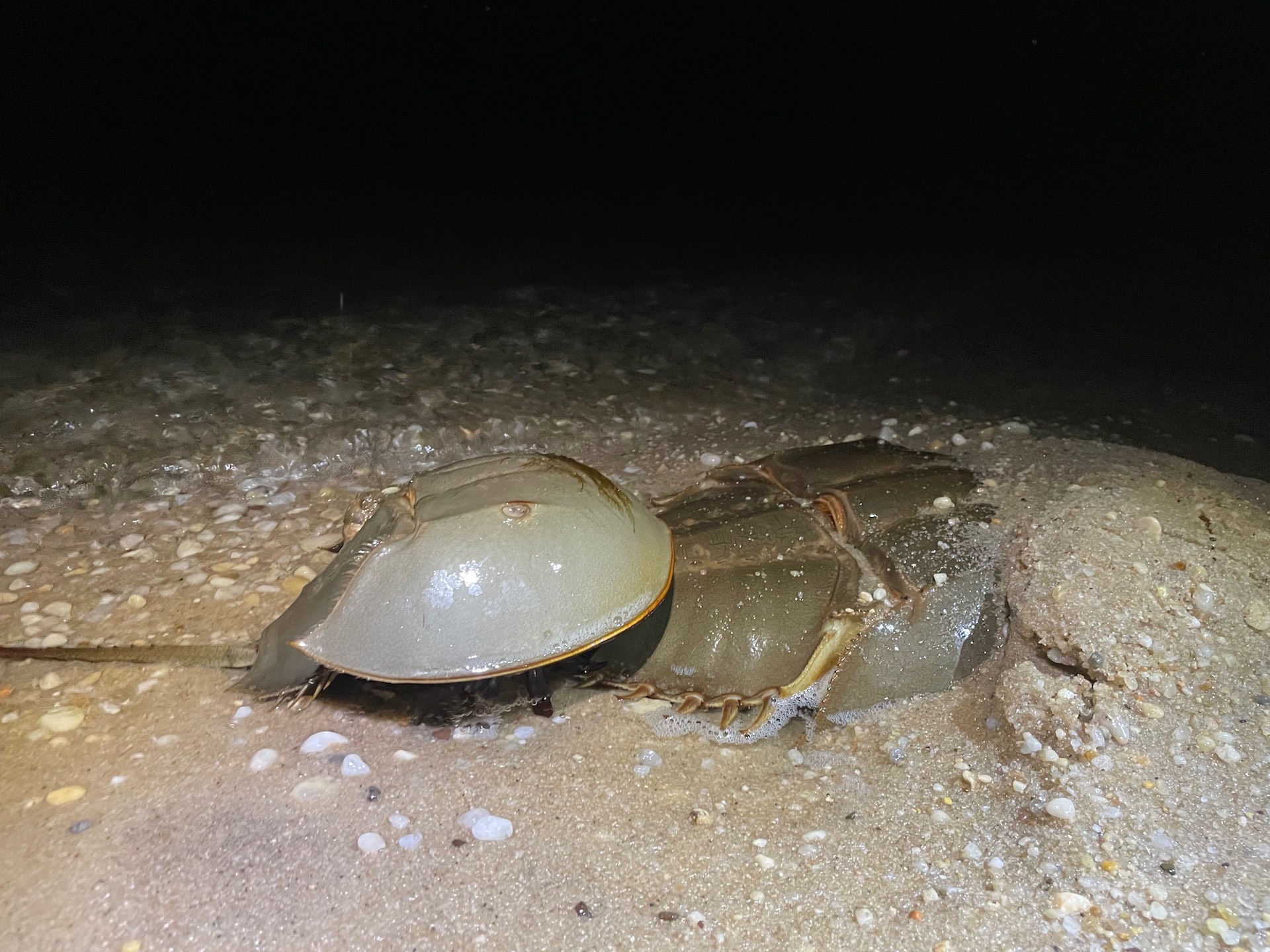 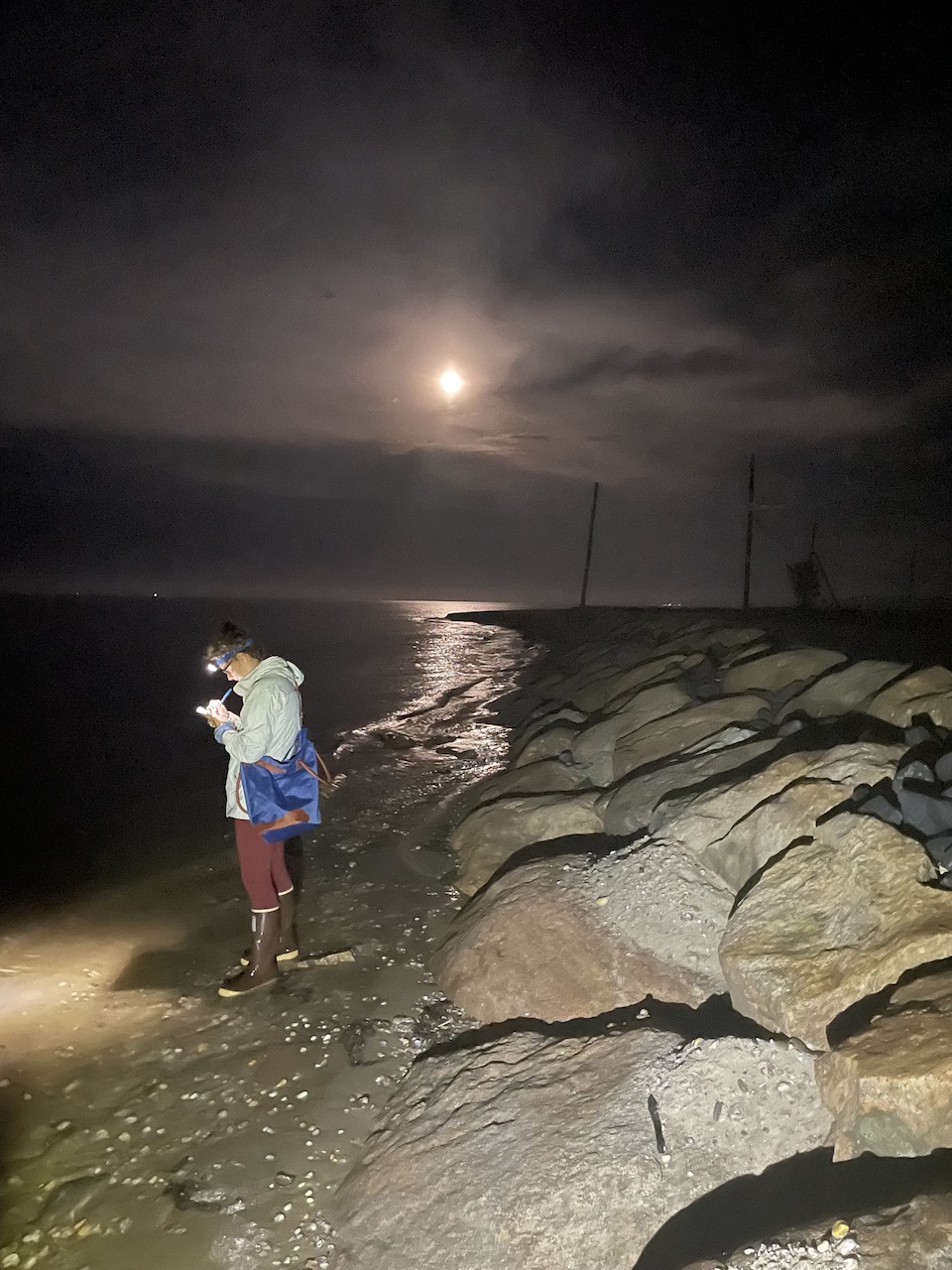 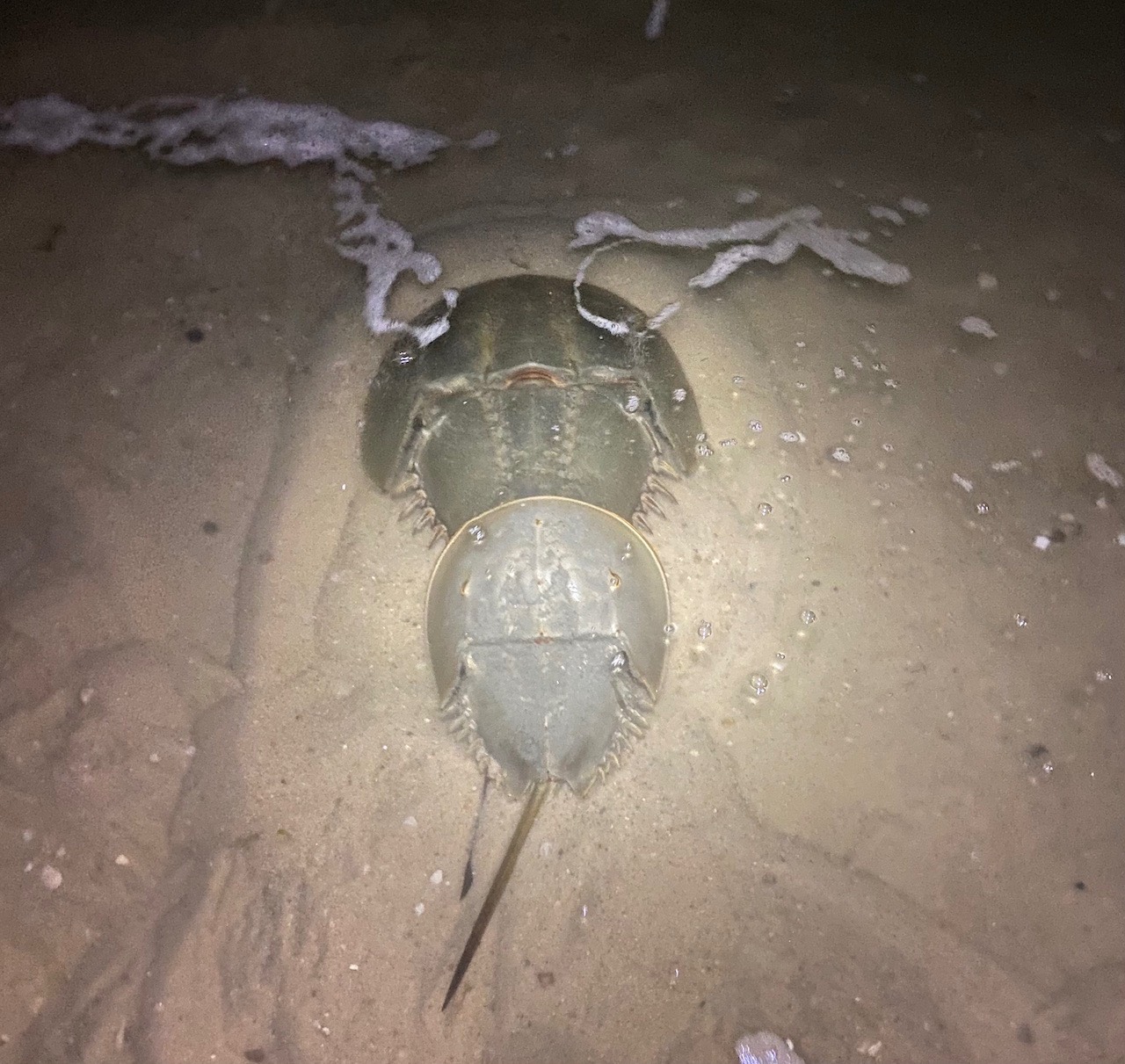 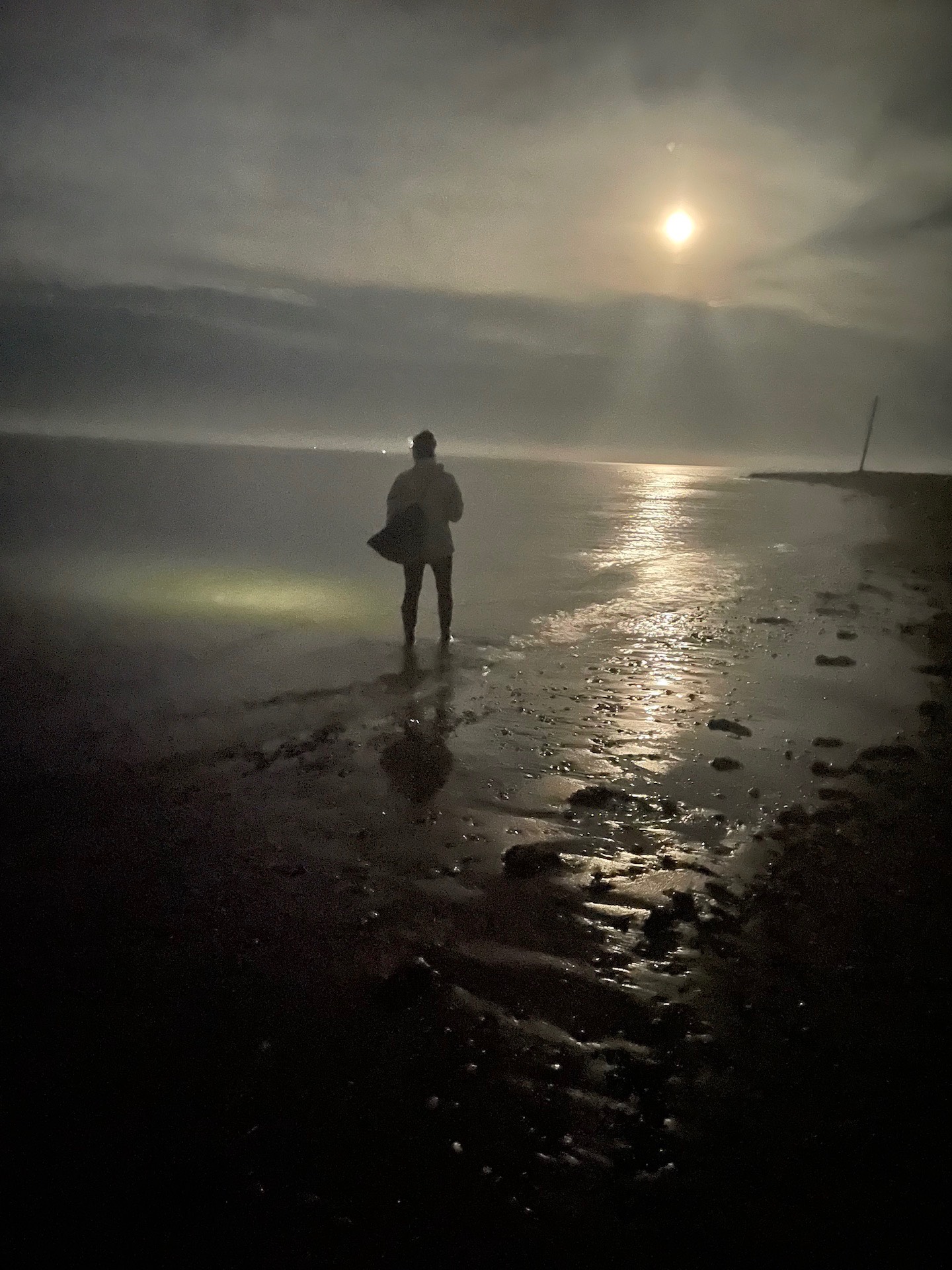 Alt text: Person silhouetted on a beach at sunset. 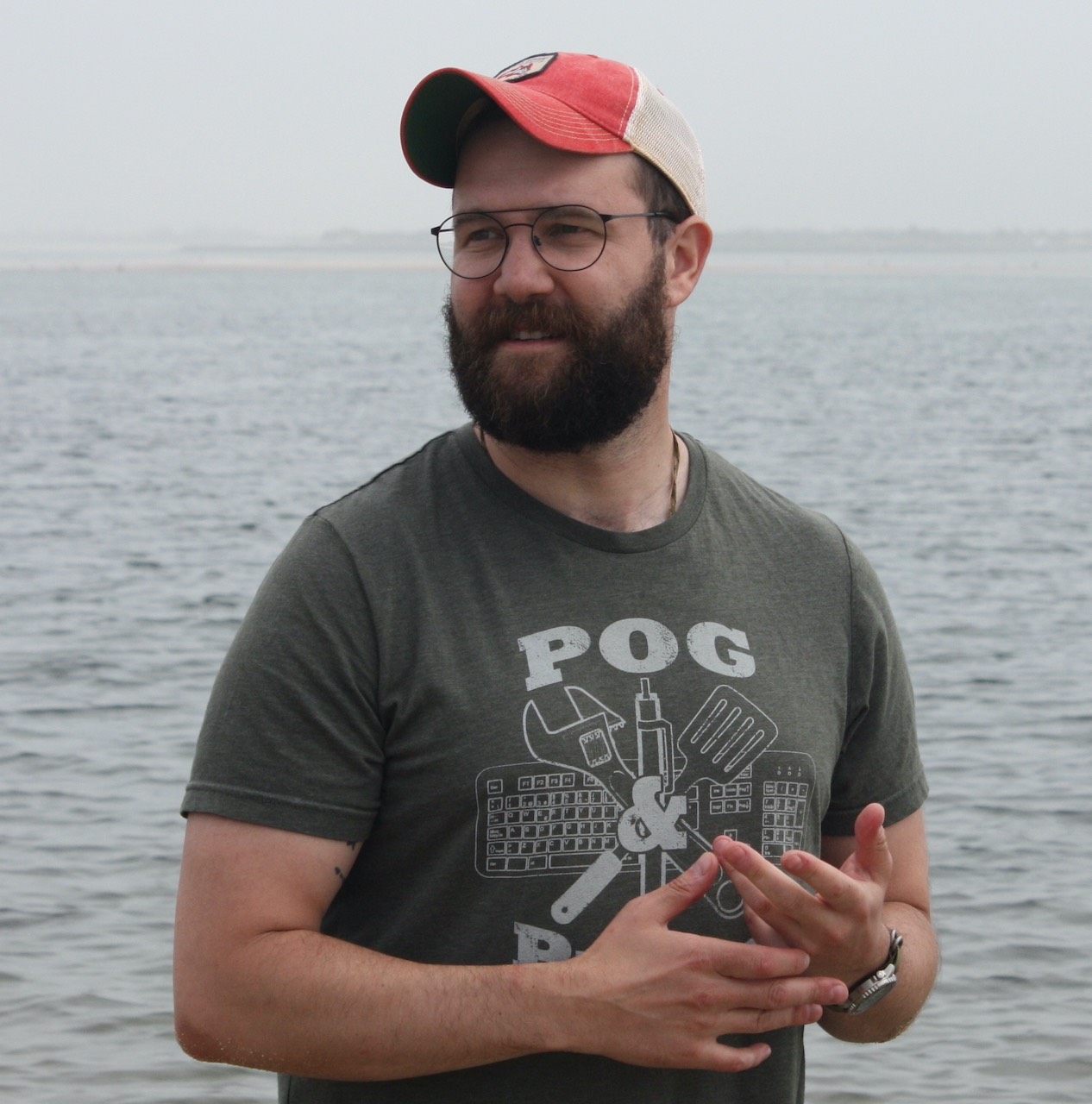 It's All About People: