Stony Brook, NY, November 17, 2014 – Cupcake lovers will unite as they watch students show off their decorating skills at Campus Dining’s Cupcake Wars event on Tuesday, November 18th. Four teams of students will vie for the title of Cupcake Wars Champion in the Student Activities Center Ballroom from 6:00pm-8:00pm.

The competitors will receive everything they need to create the perfect cupcake display including different sizes and flavors of cupcakes, icing bags, tips for decorating and all the baking ingredients necessary.

The Iron Chef-style competition is based off of the popular Food Network show, where four pastry chefs compete to see who can bake the best looking and best tasting cupcakes. Student teams interested in competing registered online at  stonybrook.edu/dining from November 3rd through November 7th. The four teams each made up of four students were selected through online voting from November 7th through 14th. Campus Dining received over 500 votes from the campus community for the selection of the four competing teams.

The final four teams Cupcake Mafia, Cupcake Warriors, X-Men, and Frostalicious were announced on November 14th giving the competitors one week to plan their best cupcake designs before they face off for the title of Cupcake War Champions.

“It’s great seeing students getting involved on campus,” said Carly Shephard, Campus Dining Marketing Manager and Moderator for this event. “We think this could be a great opportunity and a really fun way for students to show their competitive spirit in their culinary and decorating skills.”

The judges, including Joshua Voyles, Residence Hall Director, Jacqueline Greene, Campus Dining Bakery Production Manager, Jason Damato, Campus Dining Executive Chef, and Madiha Abid, returning Cupcake Wars Winner will taste and evaluate each entry according to the flavor of the frosting, appearance of the display and the originality of the design within the theme of the event. Members of the audience will be given a collective vote and may judge each team based on the appearance and originality of the cupcake they prepared. The students on the winning team will each receive a $50 Starbucks gift card and a basket of baking goodies.

“We’re looking to test their creativity and give the teams a real challenge,” said Jacqueline Greene, Campus Dining Bakery Production Manager and Pastry Chef. “I can’t wait to see what the students create for this year’s Alice and Wonderland theme.” 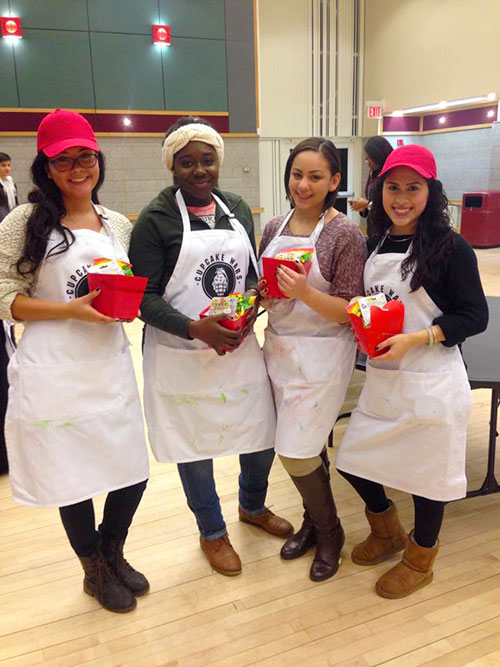