Obituary for Velio A. Marsocci 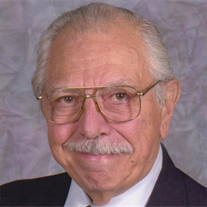 Marsocci was an educator and researcher. He was the first to achieve experimental measurements and theoretical model for spin-orbit interaction in single-crystal ferromagnetic thin films and to develop theoretical models of superconducting linear amplifiers. His research was supported by the Air Force Office and the National Science Foundation. He was also licensed professional engineer in New York and New Jersey.

In the period 1946-1949, Marsocci was with the United States Navy. He was a very active member of the Institute of Electrical and Electronics Engineers, National Society of Professional Engineers, American Society Engineering Education, Eta Kappa Nu, Tau Beta Pi, Sigma Xi, and Golden Key.

Marsocci is survived by his wife Frances Marsocci, his daughter Francesca Rebehn and her husband Allan, his granddaughter Ashley and his brother Mario Marsocci and his family.  He is predeceased by his son Christopher.

Donations in memory of Velio Marsocci can be made to