A transdisciplinary artist acts to Influence how race and gender are coded.

“I don’t feel like I’m a technologist,” admitted Stephanie Dinkins, associate professor of art in Stony Brook’s College of Arts and Sciences.

Yet the transdisciplinary artist is at the forefront of an effort to influence the thinking of the technologists behind artificial intelligence (AI) as it begins to transform our daily lives. Keenly sensitive to the built-in biases of machine intelligence, Dinkins creates platforms for dialogue about AI as it intersects race, gender and our future histories.

Dinkins’ journey into the science world began when she encountered Bina48 — a humanoid robot featuring chatbot functionality — on YouTube in late 2013.

“Bina48 takes the form of a black woman’s head and shoulders on a pedestal,” Dinkins said. “I became very interested in how and why one of the world’s most advanced social robots was a black woman.”

A photographer by training, she resolved to meet Bina48 firsthand, “befriend” the robot and document their interactions. In the summer of 2014 she headed to Bristol, Vermont, where Bina48 resides at the Terasem Movement Foundation, an organization dedicated to promoting the “world ethical” use of advanced nanotechnology as it applies to human life. There she was able to speak to the people who run the program.

“Bina48’s developers were thinking about human consciousness, machine learning and what’s possible,” Dinkins said. “They were trying to give it social and emotional context in order to make it emotionally aware and relatable.”

However, after conversing with Bina48, Dinkins quickly realized its limitations.

“Bina48 was hard to talk to,” she said. “When I asked her questions about race, though she gave the right answers, they did not seem to emanate from experience. This interaction with Bina48 led me down a rabbit hole of questions. I became concerned that we’re building a world mediated by algorithms and big data, and that world is being built by an extremely small, homogeneous subset of the population.”

Dinkins also felt that Bina48 should not be the lone representative of blackness in the robot world. The best way to correct this, she thought, was to build an AI created collectively by communities of color and reflecting their experiences. Though not a trained coder, she decided to research how machine-learning algorithms affect people of color.

“Just because I’m an artist doesn’t mean that I’m not interested in contributing to something technical,” said Dinkins, whose work has been exhibited at the Philadelphia Museum of Art, International Center of Photography and the Studio Museum in Harlem, among many other venues. “I asked myself: ‘How would I fix current robots? What does AI need from me?’”

Diving headfirst into the technology pool, she decided to develop a deep-learning, voice-interactive chatbot as a memoir. Last year Dinkins was named to the Open Society Foundations’ 2018 class of Soros Equality Fellows, a program designed to help incubate innovators striving to create and develop new ways of addressing the challenges of racial disparity and discrimination in the United States.

Through this fellowship, the support of the Sundance Institute New Frontier Lab, Eyebeam, Pioneer Works Technology Lab and the Stanford Institute for Human-Centered Artificial Intelligence, Dinkins is developing Not the Only One (N’TOO), an experimental and multigenerational memoir/project of one black American family, told from the perspective of an AI with an evolving intellect.

According to Dinkins, N’TOO is a conversational AI designed, trained and aligned with the needs and desires of black people who are drastically underrepresented in the technology sector. It’s an experiment in creating an AI storyteller populated with background knowledge supplied by three generations of women from her family spanning more than a century of direct human experience.

“To make it viable, we need to provide a foundation that gives it context and adheres to the values of the communities that it’s based on,” Dinkins said.

She referenced how, in the past, some school tests reflected racist societal biases, which denied communities of color access to scholarships and other opportunities for higher education. “Today I see these biases coded into things that are a part of everyday life,” she added.

Dinkins believes a small subset of the population has outsized societal influence via their roles as the architects of today’s most far-reaching, pervasive platforms and technologies, including Facebook and Google. However, improvement is possible, she said.

“Today people and institutions are more receptive to recognizing and addressing biases in AI systems and the data that informs them,” she said. “For example, I’m associated with a global organization called ‘Black in AI,’ which is working to increase the presence of black people in the field of artificial intelligence.”

Through N’TOO, Dinkins works toward creating a new kind of artificially intelligent narrative form that blends oral history and creative storytelling methods to spark the imagination and draw underrepresented communities into the crucial discussions about AI that can impact the trajectory of this far-reaching technology. It’s an area in which her position as an artist is an asset.

“I’ve been invited into all sorts of spaces to think about the values, ethics and capabilities we are building into AI systems,” she said. “I’ve also run workshops to help communities of color become more aware of these urgent issues, as well as to identify and enact our agency within these systems.”

Not the Only One will be shown in a variety of contexts over the next few years. The beta version was exhibited at the Seattle Art Fair in August 2019 and the Vancouver Film Festival in September 2019. It will be featured in the “In Real Life” exhibition at the Museum of Contemporary Photography in Chicago in early 2020. Conversations with Bina48 were also featured in the Uncanny Valley exhibition at the de Young Museum in San Francisco in January. 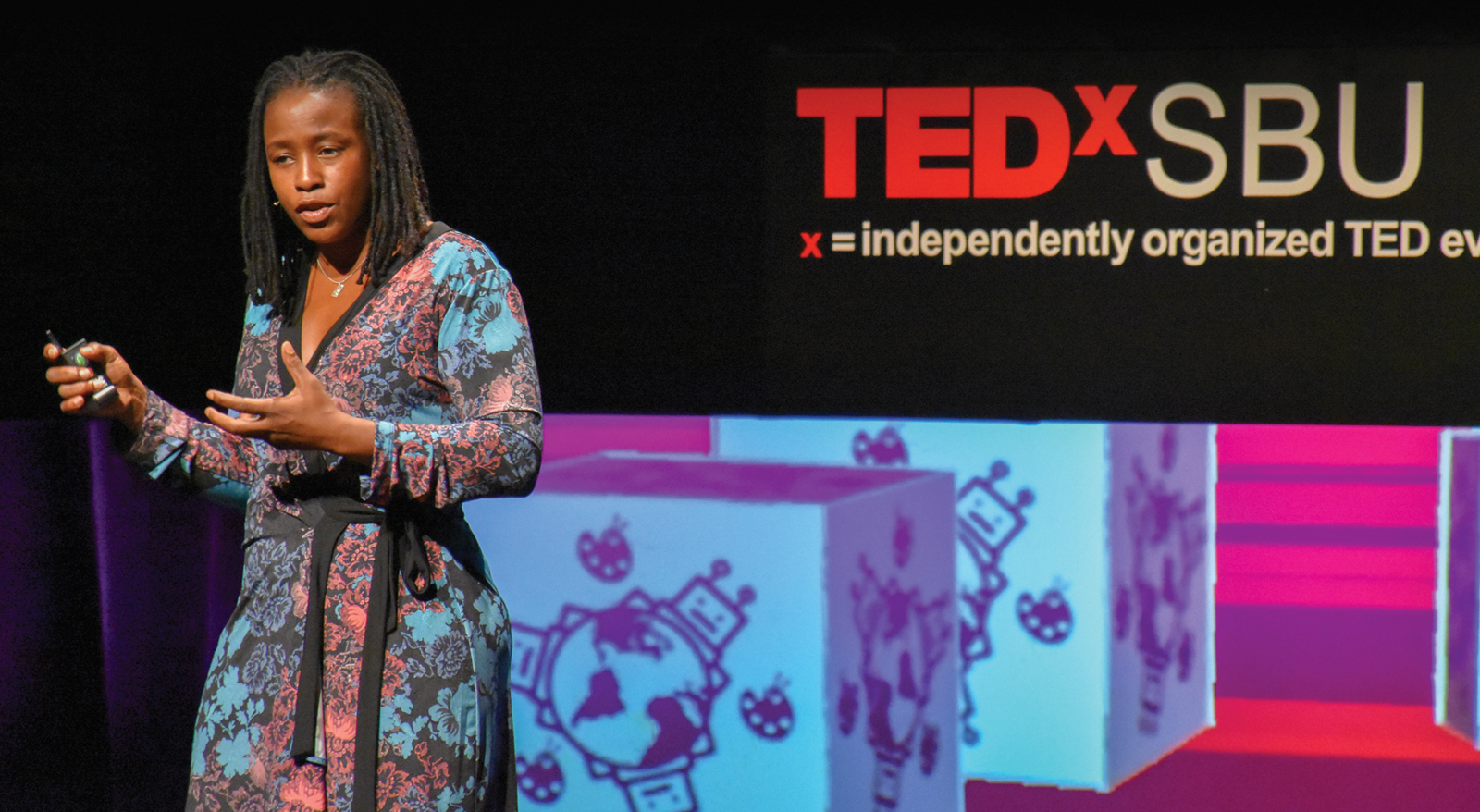