In fact, she has made a decades-long career out of doing that.

In the Office of the Vice President for Research, where she has worked for a little more than a year, Maung-Gaona brings 17 years of Stony Brook University experience to her current triad of roles — associate vice president of research, deputy operations manager and director of the new Office for Proposal Development (OPD).

Building a new operation requires a considerable amount of focus, and in the OPD she and her team help faculty investigators take their research to the next level.

It’s too early to plot Maung-Gaona’s career trajectory in the research arena, but a clue as to where she is going may lie in looking at her past achievements.

In 1997, fresh out of college, she landed a job supporting the development of climate change project proposals for the United Nations Development Program, the UN’s global development network that focuses on the challenges of democratic governance, poverty reduction, crisis prevention and recovery, energy and environment, and HIV/AIDS.

“I reviewed proposals submitted from countries in the Asia and Pacific region to ensure compliance with regulations and requirements set forth by the Global Environment Facility,” she said.

That job led to opportunities developing education programs for UNESCO in Kenya and Save the Children in East Timor.

She arrived at Stony Brook in 2000, hired as coordinator for a National Science Foundation (NSF) project run out of the University called Alliances for Graduate Education and the Professoriate (AGEP), which aims to increase the number of underrepresented graduate students in science, technology, engineering and mathematics (STEM) careers.

“Nina made a compelling case for being a part of Stony Brook’s efforts to help these students excel — not just avoid failure,” said SUNY Distinguished Service Professor David Ferguson who, as chair and associate provost for diversity and inclusion in the Department of Technology and Society, worked closely with her for many years.

Stony Brook researchers are making remarkable discoveries and have collaborations throughout the world.

Maung-Gaona relates to the economic challenges some of these students faced. When she was 3 years old, she and her family had emigrated to Woodside, NY, from the country formerly known as Burma, and for many years the family struggled financially.

“It was hard watching my parents experience hardship, and I tried my best to help them,” she said. So at age 11, she went to work alongside her mother in a garment factory.
By the time she was a teenager, she was well assimilated into Western culture and assumed a new role — facilitator. She communicated with utility companies, navigated financial transactions and handled medical appointments for her parents and younger sister.

“You have to grow up quickly when you are part of an immigrant family, and you end up being a partner with your parents,” she said. “It was during this time that I learned how to work within the system.”

At Stony Brook, Maung-Gaona parlayed her personal experiences into a way to help those who are economically disadvantaged.

“She wasn’t from one of the affected groups, but she also wasn’t a white person telling them how to do things better,” said Lawrence Martin, former dean of the Graduate School, who is now director of the Turkana Basin Institute. “She brought some real new ideas and energy to Stony Brook.”

Martin encouraged Maung-Gaona to cement AGEP’s missions and goals into the broader context of a center. She heeded his advice and in 2002, the Center for Inclusive Education (CIE) was born.

At the CIE, Maung-Gaona developed programs and activities that gave underrepresented graduate students a sense of community and a way to share their work in a supportive environment. One initiative, the Research Café, gives doctoral students the opportunity to present their research to their peers — valuable practice for ultimately defending their dissertations to a panel of faculty.

Javier Monzón ’12, an assistant professor of biology at Pepperdine University, was one of those students. While at Stony Brook, he presented twice at Research Café and credits it with helping him to sharpen his scientific communication skills.

“I use these skills every day as a researcher and educator,” he said. “Research Café was just one of the many professional development and community-building initiatives of the CIE that benefited me.”

Between 2002 and 2016, under Maung-Gaona’s leadership, the CIE served more than 600 graduate students (more than half in STEM disciplines) and more than 50 postdoctoral trainees, and generated more than $17 million in external funding from the NSF and National Institutes of Health.

While Maung-Gaona worked tirelessly to ensure that economically challenged graduate students faced a brighter future, she realized that she “needed a little bit of diversity” in her own career.

She found her perfect opportunity in research, and specifically, with the OPD, which fosters campuswide collaborations, and promotes and supports the development of large-scale multidisciplinary research proposals.
“Having Nina here is a game-changer because she’s been able to leverage her background in writing proposals to improve our success in going after large research projects,” said Richard Reeder, vice president for research/operations manager for the Research Foundation.

Anil Yazici, assistant professor in the Department of Civil Engineering, understands the value of the OPD. He’s worked with Maung-Gaona and her team on two transportation engineering proposals.

“There are dozens of questions about paperwork and budget items, and it’s easy to feel overwhelmed to the point where you want to abandon your submission,” Yazici said. “Nina brings a sense of serenity to our meetings — she’s like a sponge for stress. In the end, all my concerns were sorted out.”

As Maung-Gaona transitions into her role at the OPD, her background in diversity in graduate education is proving to be valuable.

“Many research proposals require education, training and mentoring plans for undergraduate students, graduate students and postdoctoral trainees,” she said. “As a research-intensive university, we do high-impact research and train future scientists, and in doing so, we have the opportunity and obligation to think strategically about bringing in a more diverse population — expanding the pool and creating more opportunities for all Americans to engage in research,” she said.

As in all her endeavors, Maung-Gaona is bringing her A game to the OPD, but she said that it’s premature to measure outcomes.

“Right now, it’s a bit of a culture change to have this office at Stony Brook,” she said. “Stony Brook researchers are making remarkable discoveries and have collaborations throughout the world. I want to make it easier for them to do more of that and help bridge as best we can the faculty-student-staff connection.” 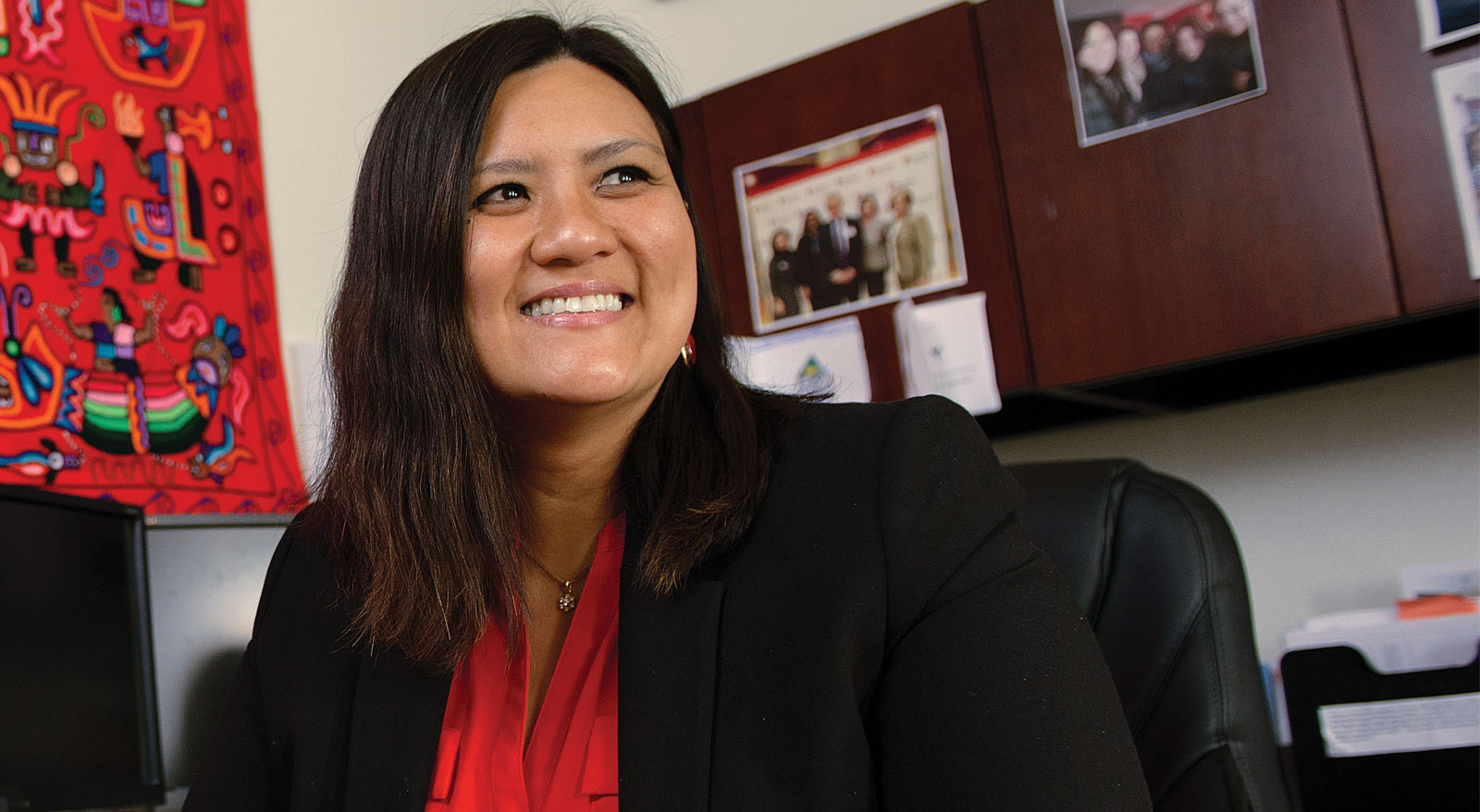