JAY ROSENBERG ’67 and WAQIDI FALICOFF ’69 reconnected 50 years after producing music together as students and completed a recording of their song “Heaven Release Her,” which is being considered for the 2017 International Acoustic Music Awards.

ROBERT PASSIKOFF, PHD ’69 is due to publish his book, At the Speed of the Consumer: Branding in the 21st Century. He is founder and president of Brand Keys, Inc.

ROBERT WISHNOFF, EDD ’73, as president of DB&E Sports Imports, started a new venture in importing and distributing Slokker ski and bicycle accessories from Italy and Germany. He is also president and clinical director of Human Resource Associates.

HANS JÜRGEN PIRNER, PHD ’74 published The Unknown as an Engine for Science.

MONA SCHEUERMANN, PHD ’74 recently published Reading Jane Austen. She was a Fulbright Professor at the University of Vienna in 2014.

RACHEL SHUSTER ’76, one of the founding members of USA TODAY, is now editor at the Tax Foundation in Washington, DC.

BETTIE STEINBERG, PHD ’76 was promoted to provost of research for Northwell Health.

DAVITA SILFEN GLASBERG, PHD ’78, ’83 was named Interim Dean of the College of Liberal Arts and Sciences at the University of Connecticut.

KEITH POWELL ’78 is a founding member of the Water Street Chamber Players Wind Quintet and Piano.

MITCHELL ACKERSON ’79 retired from the U.S. Army after more than 31 years of service.

NANCY EHRLICH LAPID ’79 is the editor in charge at Reuters Health, the medical news division of Thomson Reuters.

VENANCIO FUENTES ’80, chair of the Department of Engineering Technologies and Engineering Science at County College of Morris, is the senior member in the Institute of Electrical and Electronics Engineers.

ROGER ZAHAB ’80 is senior lecturer and conductor of the orchestra at University of Pittsburgh and a founding core faculty member of the MFA in music composition program at Vermont College of Fine Arts.

ELAINE DAVIS ’81 has lived in Hong Kong for the past six years, and is partner and chief operating officer of a Cayman asset management firm.

STUART GLICK, ESQ. ’81, an attorney with Thompson & Knight LLP, was recognized in Best Lawyers in America 2017.

SHANKARA PRASAD, PHD ’82 is founder and managing trustee of the Sampoorna Swaraj Foundation, and is the architect of the Work Flow Automation software solution for Indian government organizations.

SCOTT MIDDLETON, ESQ. ’84, founding partner and trial attorney at Campolo, Middleton & McCormick, was elected to the Board of Directors of East End Arts and appointed to the Judicial Screening Committee of the Suffolk County Bar Association.

COLETTE MCCARRICK GEARY, PHD ’87, ’89 was inaugurated as the 12th president of The College of St. Scholastica.

MARY MESSINA REMMLER ’88, ’93 was appointed vice president for strategic planning and analysis at the University of Delaware.

PATRICK JENKINS ’90, founder, Patrick Jenkins & Associates, ranks No. 7 on the 2016 Queensborough 50 list by City and State.

SHARON KLUGEWICZ ’90 was promoted to president of Americas Region for Chembio Diagnostics, Inc.

HEIDI G. SIDLEY ’92, managing director and principal at StoneStreet Equity, was named one of the Top Women Advisors in 2016 by the National Association of Plan Advisors.

JAMES BIBB, PHD ’94 joined the University of Alabama at Birmingham Department of Surgery as professor and vice chair of basic research.

JOSEPH CAMPOLO, ESQ. ’94, managing partner of Campolo, Middleton & McCormick, LLP, was awarded “Best Lawyer on Long Island” by the annual Best of Long Island, and was appointed to the board of directors at United Cerebral Palsy of Long Island and the Tourette Association of America.

ROBIN DELUCA-ACCONI, PHD ’94, ’15 presented “Social Workers as Global Activists: The Power of Advocacy in the Campaign for Fair Globalization” at NASW’s national conference.

MARIA RODRIGUEZ ’95 was designated deputy ambassador at the Venezuelan Embassy in Denmark.

MARCIA NEBLETT ’98, professor of foundations drawing and design at SCAD, recently gave a TedxSBU talk about her Fulbright Grant to India.

MICHELLE NEARON, PHD ’00 is associate dean of graduate student development and diversity and the OGSDD director at Yale University.

RUBEN COSTA-SANTOS, PHD ’02 is the director and head of FX at ITG.

BRIAN BATTEN, PHD ’03 was promoted to associate in the Richmond, Virginia, office of Dewberry. He is a senior coastal scientist and project manager with Dewberry’s resilience solutions group and leads the firm’s sea level rise practice.

WARREN CHEESMAN ’03 is the director of research and development at Air Techniques, Inc.

MELISSA LANFRIT-HAIT ’04, pianist and teacher, was a featured entrepreneur in The Sanskrit Post.

HANSEN HSU, PHD ’07 is a curator in the Center for Software History at the Computer History Museum in Silicon Valley.

JEFFREY REYNOLDS, PHD ’07, president and CEO of the Family and Children’s Association, delivered a TEDx Talk at Adelphi University.

ERAN SHOR, PHD ’07, ’10 is associate professor in the Department of Sociology at McGill University.

VINCENT VACCARO ’07 was promoted to staff accountant in the Tallahassee office of James Moore.

CLAUDY BINCE ’08 graduated as the valedictorian of his class from Howard University School of Law.

MIREYA MAYOR, PHD ’08 is one of seven Fulbright alumni who will receive the inaugural IIE Global Changemaker Award in celebration of the 70th Anniversary of the Fulbright Program.

TONI LYN MORELLI, PHD ’08 was hired as a research ecologist for the U.S. Geological Survey at the Northeast Climate Science Center. Her climate change research has been featured on NPR and in Mother Jones.

BRET SIMNER ’08 delivered his TEDx talk, “A Humorous Introduction to the Double Bass.”

JOSEPH ANTONELLI ’09 was appointed assistant commissioner for financial management and budget administration at the New York City Department of Correction.

ANTHONY COOKE ’09 is a visiting assistant professor of English at Emory University.

PATRICIA SCARLATA ’09 is living and working abroad as a K–12 school counselor at an international school in Bangkok, Thailand.

JONATHAN GOTTFRIED ’11, co-founder of Major League Hacking, was named to the 2017 Forbes 30 Under 30 in the area of education.

CHRIS CLOONAN ’12 was featured in Newsday for his work as a tour guide in Cuba. His interest and fondness for the country was sparked by a trip he made through the School of Journalism.

KEVIN PURCELL ’12 is one of 15 medical students nationwide to receive the 2016 Physicians of Tomorrow Award from the American Medical Association Foundation.

LONIA FRIEDLANDER, PHD ’15 is in Israel to start her Fulbright postdoctoral fellowship.

AARON ROSENTHAL ’15, ’16 is a software engineer at MLB Advanced Media.

JANEE JOHNSON ’16 is an intern at Colure Media and works for a diagnostic imaging tech start-up on Wall Street.

In a distinguished career at Stony Brook that spanned nearly 25 years, Baigent, 71, was dedicated to driving strategic direction for the Division of Student Affairs. Earlier, as president of the Faculty Student Association, he served as an exemplar of leadership by fostering relationships with students, faculty and administrators.

A native of England, Baigent came to the United States in 1972 to pursue a doctorate in education. A rugby enthusiast, Baigent played an integral role in the resurgence of rugby in this country, helping it to become a recognized league sport. 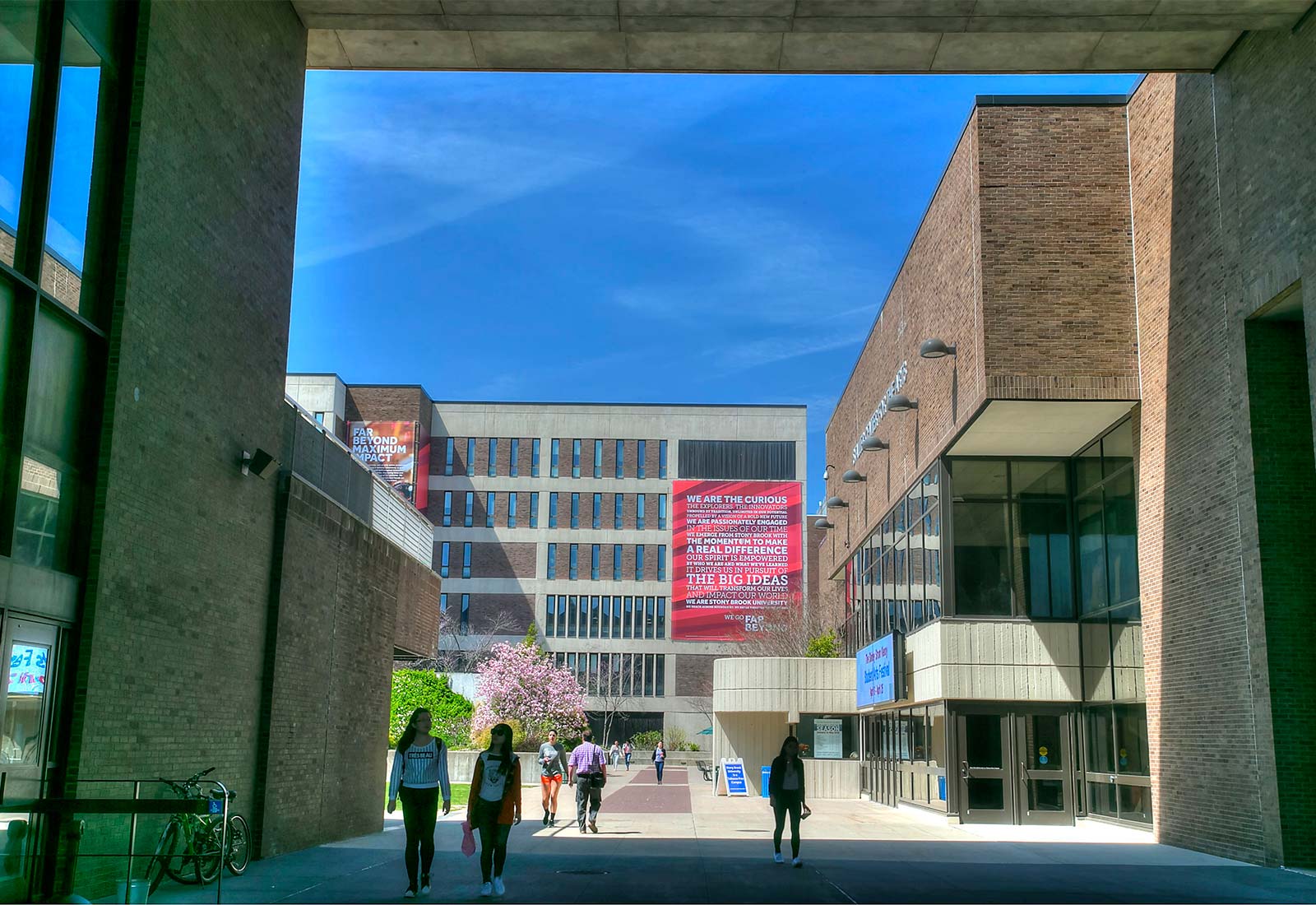