Getting Power to the People

Stony Brook is at the forefront of developing clean, sustainable energy sources

As energy consumption continues to rise at an alarming worldwide rate, the need to cultivate unexplored sources to meet ever-increasing demand has never been more pressing. Developing viable solutions to address the crisis has become a priority for scientists scrambling to come up with the Next Big Idea in energy. At Stony Brook University, researchers are turning their vision for a sustainable tomorrow into reality.

“Stony Brook is uniquely positioned to emerge as a world leader in renewable energy research,” said Fotis Sotiropoulos, dean of the College of Engineering and Applied Sciences (CEAS). “The University is situated in a renewable-energy-resource-rich area and has exceptional faculty and research infrastructure.”

Students and faculty in CEAS’ various academic departments are engaged in specialized areas of energy research and development. Sotiropoulos and his students research offshore wind and tidal energy resources. They are working with Verdant Power Inc., which develops marine and hydrokinetic technologies, to create the first grid-connected, tidal-energy research project in the East River. Turbines will be installed at the river bottom to harvest energy from tides to produce electricity to power Manhattan. The plan is to have a commercial-scale turbine array deployed in the river by 2020.

BNL is managed on behalf of the U.S. Department of Energy (DOE) by Brookhaven Science Associates, a partnership between the Research Foundation for the State University of New York (SUNY) on behalf of Stony Brook University and Battelle, a nonprofit applied science and technology organization.

“Only a handful of universities around the country can boast the privilege of having such access to the facilities and expertise of a premier DOE laboratory,” Sotiropoulos explained. The others include Princeton and Stanford.

Stony Brook is leading the way in another area: energy storage. At the Center for Mesoscale Transport Properties (m2M), the properties of complex battery systems are studied to minimize heat and optimize the performance of electrical energy storage devices. The m2M Center is led by CEAS faculty and housed in the Advanced Energy Center at the R&D Park. “This is a very prestigious DOE Center and it has positioned Stony Brook at the leading edge of energy storage research in the world,” Sotiropoulos said.

Esther Takeuchi, a SUNY Distinguished Professor with appointments in the Departments of Materials Science and Chemical Engineering and Chemistry, is the Center’s director and a leading expert in energy storage technology.

“We’re interested in making batteries work more efficiently. We study the fundamental properties and understand how to modify them in order to generate more electricity and less heat,” said Takeuchi. “Batteries can make renewable power more usable. A challenge that we consider is to take materials that have not historically been used in batteries that are earth-abundant and environmentally friendly, and evaluate them for use in a new generation of batteries.”

Her group has also benefited from its partnership with BNL. “Brookhaven is a significant partner in our Center,” said Takeuchi, who is also the Knapp Chair in Energy and the Environment. “We collaborate with many scientists there and use their facilities. It allows both groups to do things that on their own they could not do.”

Her point is illustrated by a discovery made as a result of using BNL’s resources. “We looked at a class of materials for a battery. Under a microscope, they looked like tiny fibers. Conventional scientists’ vision of these fibers is that ions move through the fibers in one direction,” Takeuchi said. “But we found out by looking at molecules with the experts at BNL that the ions move down the fiber, but then they move through the sides and jump from one fiber to the other. It was a significant discovery that the ions aren’t confined to one direction, which can allow the batteries to deliver higher power.”

Another area of research is changing the design of the engine for the future. At Stony Brook, progress is being made on a project that uses advanced combustion to design clean, efficient generators for homes using natural gas. Sotirios Mamalis, an assistant professor in the Department of Mechanical Engineering, said the project implements low-temperature combustion technology in a free-piston engine architecture to design a combined heat and power system that can achieve fuel-to-electricity efficiency of higher than 40 percent. Such a system can be used in homes to produce electric power and heat, while emitting near-zero nitrogen-oxide emissions.

Since improving transportation emissions is a major focus of energy research, cultivating a partnership with automakers has proven beneficial for CEAS. “We have a close relationship with the auto industry,” Mamalis said. “We collaborate on projects that are funded by the government or can be funded directly from the auto industry, working with companies such as General Motors.”

Recent research at Stony Brook focused on creating mathematical models for advanced combustion engines that will be used by the auto industry to design future engine platforms with a high degree of accuracy. Mamalis said the projects benefit the University by providing research opportunities for engineering applications, and help the auto industry by advancing the methods and tools used to develop commercial engines.

Emerging Biofuels: From Plants to Nuts

The focus of CEAS’ research of biofuels is building units that can economically produce clean fuels for power and transportation using feedstocks, such as tree trimmings and landfill gases. The Department of Materials Science and Chemical Engineering has partnered with companies developing small units to supply fuels produced from local waste for power generation.

“Biofuels could play a major role in meeting energy demand without increasing greenhouse gases in the atmosphere,” said Devinder Mahajan, a professor in the department. Biofuels are liquids derived mostly from plant matter. Commercial biofuels are ethanol, largely produced from corn in the United States and sugarcane in Brazil, and used as a blend in most gasoline in the United States. Another biofuel, biodiesel, is produced from waste oil, fats and virgin oils and used to replace fossil-based diesel.

Stony Brook is developing an innovative engineering solution for off-grid power production using an unlikely energy source: nutshells from the doum, a palm native to Africa. CEAS researchers studied the composition of the doum nut and realized that its core contains oil, so splitting it open would work better for heat management during combustion in a gasifier.

At the Turkana Basin Institute (TBI), a research institution in remote Northwest Kenya that does not have access to grid power, the waste of the doum nut could be a feed in a gasifier to produce electricity. TBI ordered a 10-kW gasifier from All Power Labs (APL), a California-based company whose work centers on small-scale gasification. The APL team is currently in Kenya for preliminary setup of the unit. Trials will start in the next few weeks, Mahajan said, to establish how durable the unit is with a local feedstock.

At the same time, the Stony Brook-APL team is working with a university in Kenya using the doum nut as a feed for a 20-kW APL gasifier. The goal is to run trials with local waste materials in Kenya and other countries in sub-Saharan Africa. Successful trial runs would mean this concept can be applied more expansively — providing electricity to remote villages worldwide.

When it comes to innovative ways to promote sustainability, capturing carbon dioxide directly from the atmosphere and reducing its concentration could be an important tool in the future to combat global warming, said Matthew Eisaman, an assistant professor in the Department of Electrical and Computer Engineering and a physicist in BNL’s Sustainable Energy Technologies Department.

Eisaman invented a method for extracting carbon dioxide from the air using seawater and electrochemistry to make a carbon-neutral liquid fuel that could replace gasoline. He is on “loan” from Stony Brook and BNL until January 2017 as he works at Google’s research and development facility, X (formerly known as Google X).

“X thought that making a fuel with this method sounded like just the sort of thing that X ‘moonshots’ [projects] are made of: a giant problem solved by a sci-fi-sounding new technology,” Eisaman said. “We made a lot of progress, including building a prototype system to make methanol fuel and inventing much-improved technology for CO2 extraction.”

Stony Brook’s work with carbon-neutral liquid fuels — along with other cutting-edge research and development efforts — is positioning the University as a major force in finding clean, sustainable energy solutions.

“The most exciting thing for me and all of us at Stony Brook is to have the opportunity to be active participants in our generation’s Sputnik moment,” Sotiropoulos said.

Meryl Schoenbaum is a freelance writer and editor based in California. 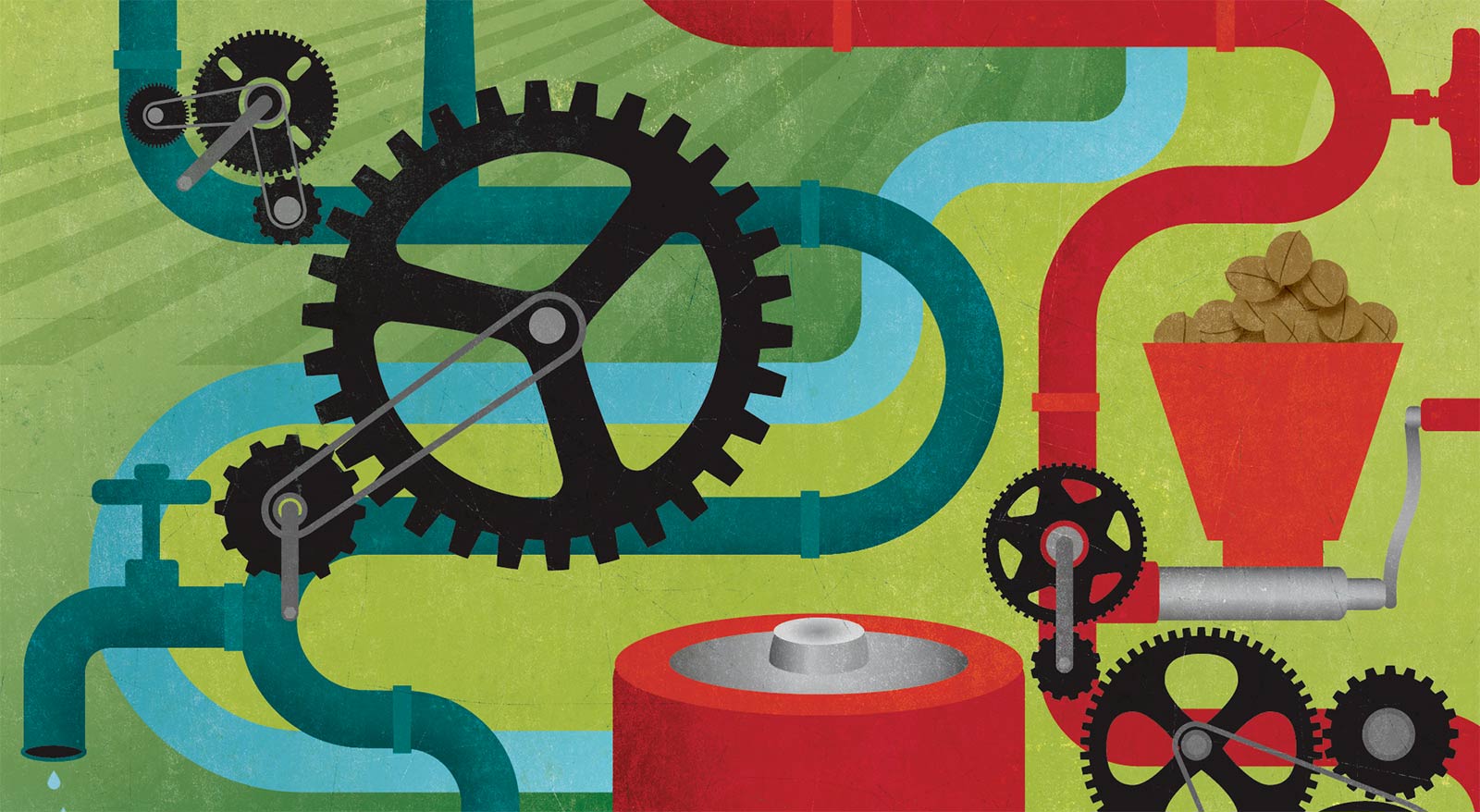 Getting Power to the People