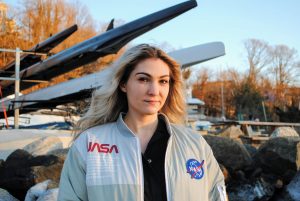 When American astronauts return to the moon in 2024, Stony Brook journalism graduate Erika Peters ‘20 will have played a small but significant role in the journey.

Peters is completing an internship with NASA’s Johnson Space Center in Houston, home to the Artemis mission, the agency’s lunar exploration program. During the four-month program, Peters literally helped to write the book on the Orion spacecraft, the vehicle that will take the first American woman and the next American man to the moon.

“The guide I worked on goes through the history of Orion — anything and everything about it,” Peters said. “It’s a guide for the agency, but started out as a reference for management and subject-matter experts who need to know something about an area of the spacecraft they may not be familiar with. It will help people if they need to give a presentation or do an interview. They can go into this Orion ‘encyclopedia’ and find whatever information they need.”

During her internship, Peters played an important role behind the scenes in making science accessible to all by helping NASA engineers and others share their work and the significance of the moon mission. Because NASA is completely taxpayer funded, sharing information about the agency’s missions and accomplishments is particularly important.

“Taxpayers are — and should be — the ultimate authority on how their money is used,” said Julia Hathaway, a faculty member and policy expert at the Alan Alda Center for Communicating Science, which is closely tied to the School of Communication and Journalism. “The challenge, of course, is helping folks connect different government programs to their lives and their experiences. Accurate and engaging communication can help them decide for themselves what programs deserve public support.”

The internship was the latest chapter in Peters’ growing interest and experience in science communication. Already, one of her previous reporting projects received eighth place in a national Hearst Award competition for best explanatory reporting. Her winning piece explored the use of psychotropic “party” drugs like ketamine and ecstasy to treat mental health conditions, including chronic depression, PTSD and anxiety.

“I’ve always been interested in science. I started with an interest in environmental science; I really liked covering stories that involved animals,” Peters said. “At Stony Brook, I did a lot of science writing and I was having such a good time doing it. I really wanted to continue on this path and find other science-related things.”

Peters built her science writing skills in one of her journalism classes, where her first assignment was to watch a documentary about black holes and write a story about it. In class, she and her classmates would work together to critique and improve each others’ stories. That class, taught by Karen Masterson, led her to apply for her first science communication internship at Brookhaven National Lab (BNL).

“Professor Masterson really helped me like science writing and break down the hard stuff into easy, understandable terms,” said Peters. “At BNL, I got to interview a lot of scientists and wrote a lot of news stories about their research with the Relativistic Heavy Ion Collider and the National Synchrotron Light Source II that they use to do X-ray research.”

Her NASA internship is one of several that Peters has completed, including at Newsday, the Mattituck-based Times Review News Group and the Arizona Republic through the Dow Jones News Fund. Her professional experiences so far have been split between traditional news media and scientific organizations pandemic, and she says she enjoys working alongside researchers and making science accessible to others.

“I’d like to keep doing science writing, either for a news organization or communications for another place,” she said. “Ultimately I would love to keep working at NASA. I love the atmosphere of working there. It’s so cool to see how everyone is so excited about what they’re doing and so passionate.”