Virtual broadcasting from the School of Journalism

For journalism students seeking broadcasting careers, one of the most highly anticipated Stony Brook moments is signing the news desk in Studio B.

Students sign it at the end of their last newscast in the School of Journalism’s advanced broadcasting class, usually when they are seniors. The desk, formerly the property of News12 Long Island, is scarred with notes, signatures, and words of advice – all on the back, where the cameras can’t see.

This year, the tradition was different – students left their marks in the middle of the semester as they wondered about the future and the pandemic’s impact.

“You’ve been thinking of signing that desk since you’re a little freshman, when you look up to the seniors and the newscasts that they do,” said Caitlyn McDuffee, a senior journalism major from Huntington. “We did get a last day in the studio but it was so abrupt. We were all heartbroken. We had a week where everything came tumbling down.”

When Stony Brook – like every university in the country – made the decision to move to remote instruction, the broadcasting students thought their class was over. After all, how can you do a newscast with no newsroom, control room, headsets or cameras, and when you can’t leave your house to get stories?

“I remember thinking we’re done with this class,” said senior Duffy Zimmerman, of Pendleton. “I thought it would just be a weekly check-in and there wouldn’t be much we could do. Then Phil [Altiere, production supervisor at the School of Journalism] came into our first class online and said he’d found this software and had already tested it and we could do a broadcast next week if we wanted.”

And so, the show went on. 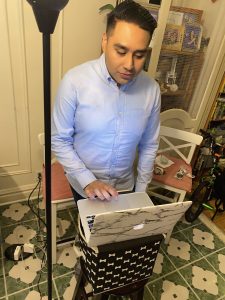 The rules were different – to keep them safe, students weren’t allowed to leave their houses to shoot video or conduct interviews. They repurposed old video footage and conducted interviews over Zoom or phones.

“We didn’t want to have any requirements that would put somebody at risk. It was one thing if they wanted to do something on their own and it was under their initiative to go out and shoot some b roll but I couldn’t in good conscience make them go out and shoot,” said Rick Ricioppo, assistant professor of practice at the School of Journalism, who taught the class with Terry Sheridan, another journalism instructor. “I didn’t want them to think even for a moment that the pressure was on them to go out. I wanted them to know that they didn’t have to put their health at risk.”

On a rotating basis, students are responsible for reporting and editing stories, serving as anchors, or running operations behind the scenes, including creating graphics, operating cameras, writing, or producing. The producer, who has an assistant and support from Altiere, is responsible for timing and cuing the show – which cameras are live, who is talking, what story comes next. It’s the top job in the show, and the one that carries the most stress.

“I was probably panicked at first but I knew who my reporters were and I knew they’d do well,” said Josh Spitz, the junior who produced the first virtual episode of SBU News. “As NBA Commissioner Adam Silver said, this pandemic is the challenge of our lifetime and that’s probably the only way to put it. In terms of this class, it was challenging but I don’t think there could have been a better group of students and professors.”

Half of the class’ newscasts were remote. In the five broadcasts, which came out every Thursday, they told stories of how the pandemic was affecting their communities, and spoke to university administrators about students’ mental health, recruitment efforts and plans for the fall.

Even without the broadcast studio, the control room, and high-end cameras and microphones, the students produced excellent work and they developed their newscasts in similar ways to many local and national broadcasts, Ricioppo said.

“If you watch the local news, you’ll see a lot of the segments, like the weather segment or the sports segment, are done from the reporter’s house. Or you’ll have one anchor in the studio and the other at home,” he said. “A lot of them are doing the same kinds of interviews that the students are doing. Really what they were doing this semester, compared to what news stations are doing now and really for the foreseeable future, there are a lot of similarities.”