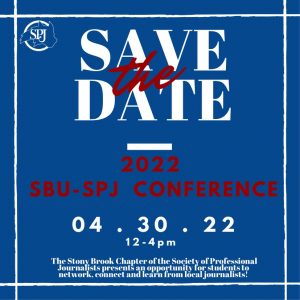 The Stony Brook student chapter of the Society of Professional Journalists will host a conference for students from noon to 4 pm Saturday, April 30, in Ballroom A of the Student Activities Center.

The conference will feature a keynote speaker, breakout rooms featuring panels of media professionals, networking and a Q&A. Lunch will be provided to those who register.

Chris Vacarro, vice president of digital at Altice USA, northeast coordinator of the Society of Professional Journalists, and former president of the Press Club of Long Island. The author of six books, Vacarro has written for the New York Times, Rolling Stone and ESPN. He is a former editor of the New York Daily News and AOL.

The conference will include networking over lunch and an open Q&A session about the state of journalism and advice for young media professionals.