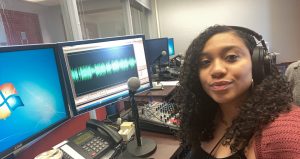 “I am so grateful and honored to be receiving this scholarship; NAHJ has been one of the main reasons why I have been able to succeed as a student journalist,” said Brown, originally from Freeport. “Journalism is a means of holding institutions and people in power accountable no matter the stakes, and I’m ecstatic that NAHJ has chosen me as a recipient of this scholarship to do exactly that.”

Brown is the first to receive the scholarship.

Brown is one of the top students at the Stony Brook School of Communication and Journalism. During her time at SBU, she has served on the School’s Student Advisory Board and the Building a Better SoCJ Workshop, led the university student chapter of the Society of Professional Journalists, and contributed to the School’s Studio Workshop program, which produces halftime shows for Stony Brook Athletics.

She is also the managing editor of The Statesman, working her way up from a news writer. As managing editor, she implemented the “State of the University” special issue focused on student concerns and campus administration.

The NAHJ scholarship is in honor of the late award-winning reporter Ada Lourdes Vigo (Fidler), an Afro-Latina who was an award-winning journalist at El Comercio, the oldest and most influential newspaper in Peru. Vigo’s coverage of the shanty towns around Lima received many awards, including from UNICEF. The scholarship is funded by Roger Fidler, an electronic newspaper pioneer and Vigo’s husband of 32 years.

Previously, Brown participated in NAHJ’s Student Projects, reporting for The Latino Reporter about Latino essential workers pushing for better working conditions and an in-depth piece about online harassment of journalists. She also interviewed a family member of two Surfside building collapse victims and wrote a story about the family’s fight for accountability.

Brown says her inspiration and passion for storytelling comes from the inequalities and injustices she saw growing up on Long Island, riding the school bus through closely-packed apartment buildings and run-down homes full of people who looked like her.

“At the time, that is how I thought everyone lived,” Brown said. “Then, the bus went to the side of town closest to the water. There, kids with blonde hair and blue eyes would wait at the corner encircling houses that I called mansions and personal boats that were docked waiting to be taken out. I didn’t know that I was getting a child’s view of inequity.”

After graduation, Brown plans to join NBC’s social newsgathering team as an associate reporter, and to attend New York University’s Arthur L. Carter Journalism Institute. Someday, she says she hopes to cover race, equality and justice, and eventually to become a TV correspondent.

“For four years, Maya has been among our top students at the SoCJ, distinguishing herself for her dedication, commitment to excellent journalism, and to telling stories that matter,” said Laura Lindenfeld, dean of the School of Communication and Journalism and executive director of the Alan Alda Center for Communicating Science. “I am delighted that her skills and talents have been recognized by the National Association of Hispanic Journalists, and that they chose her to carry on the legacy of Ada Lourdes Vigo.”