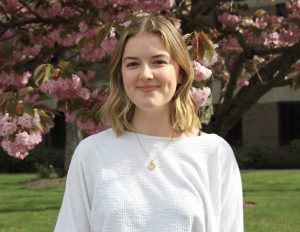 Maria Lynders, a junior journalism major at the School of Communication and Journalism, placed in the top 20 in a recent Hearst Journalism Award competition.

Lynders’ story, about a Connecticut man who turned his life around because of a bird and later became a taxidermist, won a Hearst Award in the personality/profile competition. She wrote the story, “When the nighthawk sang in Brooklyn,” for her advanced reporting class.

“Profile stories offer a window into another person’s life, their struggles and their triumphs, and Maria’s is a beautiful example,” said Laura Lindenfeld, dean of the SoCJ and executive director of the Alda Center for Communicating Science. “I’m delighted that her hard work and well-written story has earned this recognition.”

Lynders’ story was recognized by the Hearst Awards judges among student work from other leading journalism programs, including Syracuse, University of North Carolina Chapel Hill, and University of Missouri. Lynders is assistant news editor for The Statesman, a member of the university chapter of the Society of Professional Journalists and vice president of I Am That Girl, a feminist discussion club. She is also enrolled in the fast-track MBA program at Stony Brook.

The subject of her story, Michael Anderson, is the father of a childhood friend. Originally, she expected the story to be about his work at the Yale Peabody Museum as a taxidermist and maker of dioramas, the realistic displays that often hold restored and preserved specimens. When she spoke to Anderson, the story became about something more.

“‘When the Nighthawk Sang in Brooklyn’ is about resilience and one man’s deep love for art,” said Lynders, of Guilford, Conn. “It touches on themes of mental health, which is important to me. The story of Michael’s journey with alcoholism and how he overcame it is one we need to hear more often. His message about holding true to yourself and embracing your individuality was something I wanted to translate through my story.”

Lynders is the seventh Stony Brook student to be recognized by the Hearst Journalism Awards this academic year. Increasingly, students are submitting their work to the competition and winning. The School placed among the top 10 programs to receive the most awards from Hearst for its seven awards, recognizing 17 students, during the 2020-2021 school year.

“Our students are regularly producing stories that compete with others from around the country,” said instructor George Giokas, who coordinates Hearst Award entries for the School. “I’m proud of them and their abilities. It’s nice to see the confidence they gain when they win and have another accolade to add to their resumes.”

The Hearst Journalism competition recognizes the best reporting from college students, issuing awards in a variety of categories every month. Called the Pulitzers of college journalism, the Hearst Program recognizes excellence in writing, photojournalism, audio, television and multimedia reporting for undergraduates majoring in journalism.