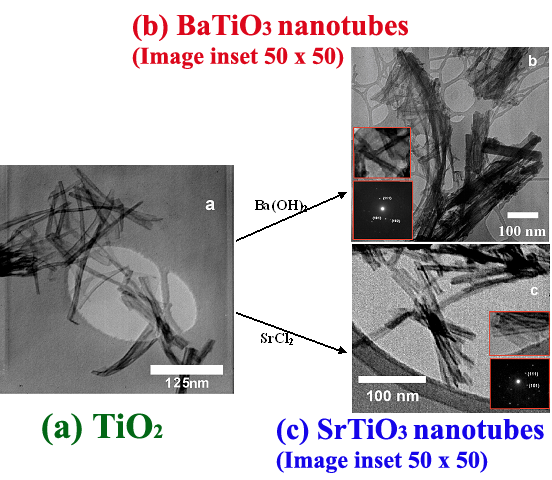 2. Large-scale, environmentally friendly synthesis of  BaTiO 3 nanorods and SrTiO 3 nanocubes . Single-crystalline perovskite nanostructures of reproducible shape were prepared using a simple, readily scaleable solid-state reaction in the presence of molten NaCl and a nonionic surfactant. Pristine BaTiO 3 nanowires had diameters ranging from 50 to 80 nm with an aspect ratio larger than 25. Single-crystalline SrTiO 3 nanocubes with a mean edge of 80 nm were also produced. 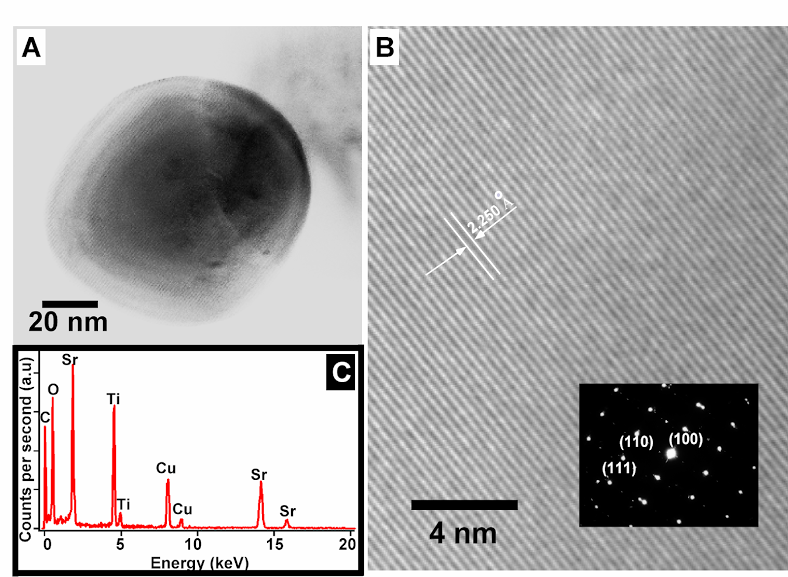 3. The ability to conveniently synthesize single-crystalline nanomaterials with controllable size and shape is essential for rationally exploiting their nanoscale physical and optical properties. A series of  single-crystalline Ca 1-xSr xTiO 3 (0 ≤ x ≤ 1) perovskite  nanoparticle samples of reproducible, tunable composition were prepared using a simple, readily scaleable solid-state reaction between metal oxalates and anatase TiO 2 in the presence of NaCl and a nonionic surfactant. Shapes of the generated Ca 1-xSr xTiO 3 nanoparticles altered from cubes to quasi-spheres with decreasing ‘x’ values. Nanoparticles had sizes ranging between 70 and 110 nm, irrespective of Sr or Ca content. 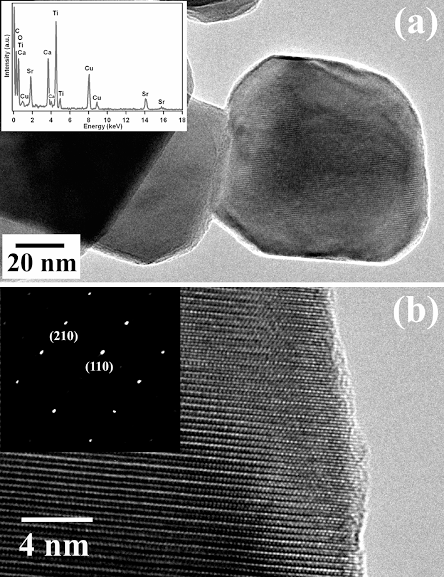 4. Synthesis, shape control, characterization, and spectroscopy of  BaZrO 3 nanoparticles (including cubes and spheres) using a simple, readily scaleable solid-state reaction in the presence of salts such as either (i) NaCl, (ii) NaOH / KOH, or (iii) NaCl / KCl. Rational control over shape is of great importance due to their strongly structure-dependent properties. For instance, zirconate cubes are useful in piezoelectric applications whereas zirconate spheres may find use in phosphors with high-luminescence efficiency. The effects of different parameters, such as salt, surfactant, reaction temperature, reaction time, precursor type, amount of salt, heating rates, and precursor ratios, on the resultant product purity, size, shape, and morphology were specifically analyzed. Among these various parameters, we found the selection of salt to be the most important one, because solubility and reactivity effects associated with the salt can alter the synthesis process as well as the resultant particle size and shape. In general, the production of relatively high-quality barium zirconate samples was favored by high annealing temperatures, slow cooling rates, and overall long reaction times. Shorter annealing times coupled with higher cooling rates resulted in the production of smaller-sized cubic particles. By contrast, longer annealing times and/or slower cooling rates induced particle conversion from cubes to spheres and usually brought forth a mixture of cubic and spherical morphological motifs. For example, either increasing the annealing time or slowing the cooling rates led to the formation of larger-sized spherical particles. 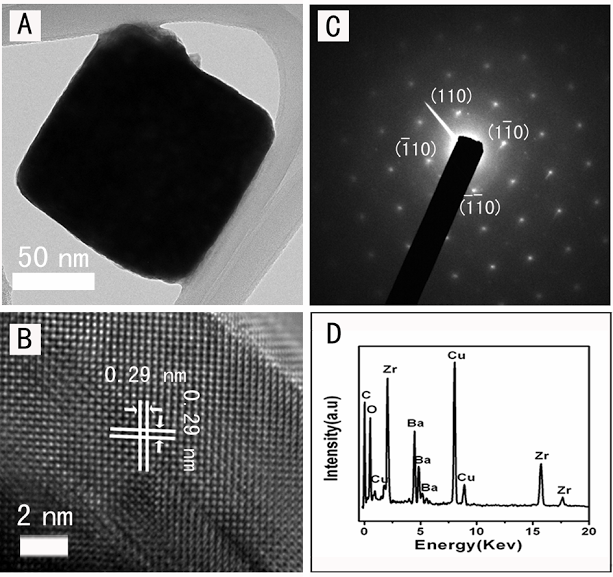 5. A large-scale synthesis of single-crystalline  LiNbO 3 nanowires  with diameters of 300-400 nm, containing only minor amounts of impurities, has been reported using a modified molten salt procedure. The isolated product is composed of rhombohedral-phase LiNbO 3 nanowires with the c-axis oriented along its length. Raman investigations further confirm the purity and ferroelectric order of the nanowires and are consistent with electron microscopy data. 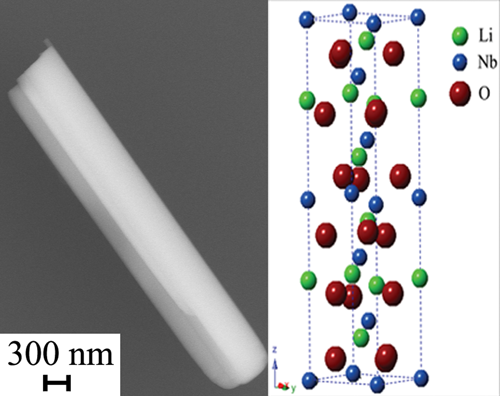 6. SrRuO 3 (SRO) has been studied extensively at the bulk and thin film scales for a variety of applications, such as multilayer devices, field-effect devices, multiferroics, and even ferroelectric random access memory (FeRAM). Conversely, the exploration of SRO nanoscale and submicrometer scale structures in terms of both synthesis and applications has been significantly limited. Herein, we are the first to report on the synthesis of SRO submicrometer-sized particles via a molten-salt method. We have accomplished this by systematically probing experimental parameters such as precursors, type of salt, annealing time, annealing temperature, surfactant, cooling rate, and reaction atmosphere in an effort to predictably control the resulting size, shape, and morphology of the SRO product particles. In particular, by quenching the reaction at a cooling rate of 100 °C/min, we can produce rounded SRO particles averaging 149 ± 100 nm in size. Moreover, with the addition of a mixture of mineral oil in Triton X-100, the final SRO particles are highly faceted, single-crystalline octahedra, averaging 126 ± 45 nm in size. Apart from the choice of molten salt which primarily controls chemical composition of SRO, we have determined the most important experimental parameter for shape and aggregation control is the surfactant, because of a combination of its hydrophobic and hydrophilic characteristics. We have found that the decomposition of the surfactant promotes the formation of SrCO3, which is consistent with the generation of SRO through the reaction of SrCO 3 with RuO 2. Our successful syntheses have allowed us to explore physical properties, that is, magnetic and electronic, of these submicrometer-sized SRO particles, which are in good agreement with bulk SRO. Furthermore, we have also explored the potential of our as-synthesized particles as effective methanol oxidation reaction (MOR) catalysts for direct methanol fuel cells (DMFCs). Not only are our as-synthesized SRO particles MOR active but also our well-defined faceted octahedra exhibit a 4-fold increase in mass-activity and a 4-fold increase in surface area by comparison with the rounded particles, thereby emphasizing a clear advantage of faceted submicrometer SRO for electrochemical applications.

7. In this report, we have applied a facile, ligand-free, ambient synthesis protocol towards the fabrication of not only a series of lead-free Ge-based perovskites with the general formulation of MA 1-xFA xGeI 3 (wherein ‘x’ was changed from 0, 0.25, 0.5, 0.75 to 1), but also CsGeI 3. Specifically, our methodology for producing ABX 3 systems is generalizable, regardless of the identity of either the A site cation or the X site halide ion. Moreover, it incorporates many advantages, including (i) the possibility of efficiently generating pure Ge-based perovskite particles of any desired chemical composition; (ii) the use of readily available, commercial precursors and comparatively lower toxicity solvents; (iii) the practicality of ‘scale up’, and (iv) the elimination of the need for any superfluous organic surface ligands or surfactants. In addition to providing mechanistic insights into their formation, we have examined the chemical composition, crystallite size, morphology, surface attributes, oxidation states, and optical properties of our as-prepared perovskites using a combination of diffraction, microscopy, and spectroscopy techniques. Specifically, we noted that the optical bandgap could be reliably tuned as a function of chemical composition, via the identity of the A site cation. Moreover, we have probed their stability, not only under standard storage conditions but also, for the first time, when subjected to both e-beam and X-ray-induced degradation, using cumulative data from sources such as synchrotron-based scanning hard X-ray microscopy (SHXM). Importantly, of relevance for the potential practical incorporation of these Pb-free perovskites, our work has emphasized the possibility of controlling chemical composition within Ge-based perovskites as a means of rationally tuning their observed bandgaps and optical behavior. 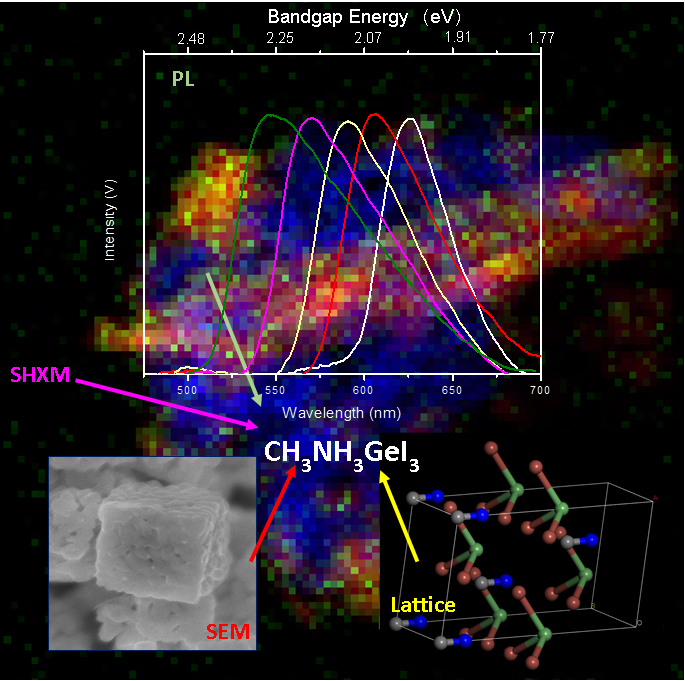 8. Nanoscale scintillators represent an important class of materials underlying the functioning of high resolution, high ‘light yield’ radiation detection equipment, applicable for medicine in addition to security and environmental monitoring. This current study has focused on the controlled synthesis of Cs 2ZnX 4 (X = Cl, Br) not only due to its very fast and promising radioluminescence decay time but also because no reliable synthesis protocols have been reported for producing nanoscale motifs of this material, to date. Solution-based methods can be used to synthesize products, possessing different, discrete morphologies with the ability to dictate particle size and shape. Specifically, we have demonstrated that a hot injection technique can be used to fabricate nanoscale rods and plates. Using this method, we systematically studied the effect of varying reaction variables, such as (i) reaction temperature, (ii) surfactants, and (iii) reaction time. As synthesized nanorods of Cs 2ZnCl 4 possessed lengths of 101.3 ± 24.4 nm with widths of 17.3 ± 4.5 nm, whereas Cs 2ZnBr 4 created under identical conditions were characterized by lengths of 206 ± 50 nm and widths of 26.7 ± 12.6 nm. Ligand assisted coprecipitation (LARP) was used to produce the corresponding micron-sized particles.  Under these conditions, we successfully synthesized spindles and spherical particles of Cs 2ZnCl 4 with sizes of 1.58 ± 0.16 μm and 1.03 ± 0.34 μm, respectively, whereas plates of Cs 2ZnBr 4 were prepared with average sizes of 0.76 ± 0.21 μm. High resolution synchrotron mapping, using the hard X-ray nanoprobe at NSLS II, was used to confirm the expected spatial distribution of Cs, Zn, and Cl within the as-produced crystals.  Nanorods of Cs 2ZnCl 4 and Cs 2ZnBr 4 were subsequently tested for scintillation light yield and decay times. Preliminary results showed that Cs 2ZnCl 4 maintained a light yield of 100-300 photons/MeV with a fast decay component of 2.6 ns. The Cs 2ZnBr 4 analogue did not give rise to any perceptible scintillation emission. 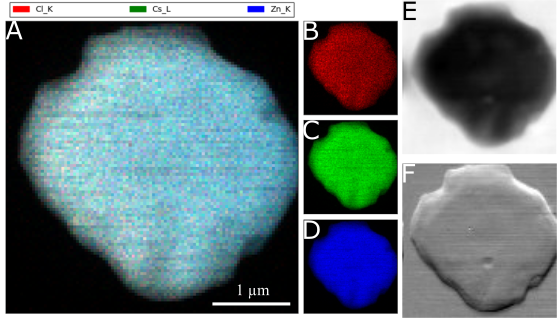