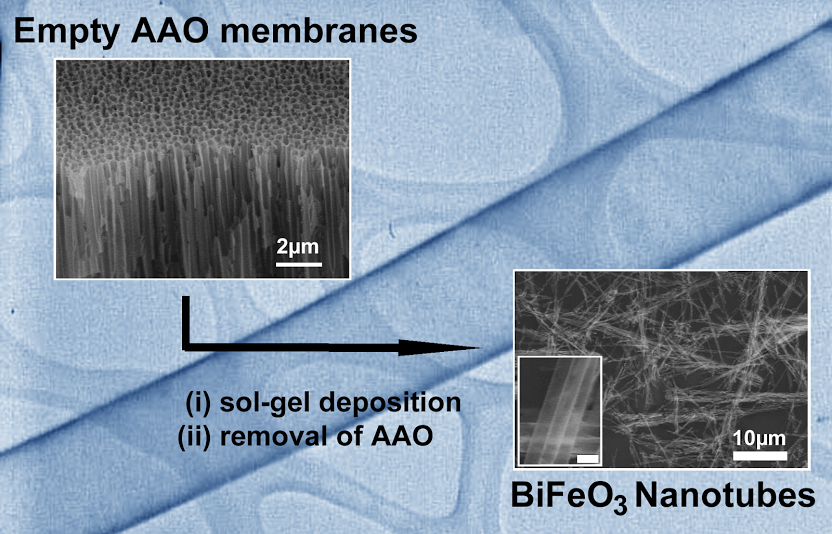 2. A systematic series of  single-crystalline BiFeO 3 nanoparticles , prepared using a sol-gel synthesis and ranging from ~14 to >300 nm in diameter, show strong size-dependent magnetic properties that correlate with: (a) increased suppression of the known spiral spin structure (period length of ~62 nm) with decreasing nanoparticle size and (b) uncompensated spins and strain anisotropies at the surface. Zero-field-cooled and field-cooled magnetization curves exhibit spin-glass freezing behavior due to a complex interplay between finite size effects, interparticle interactions, and a random distribution of anisotropy axes in our nanoparticle assemblies. 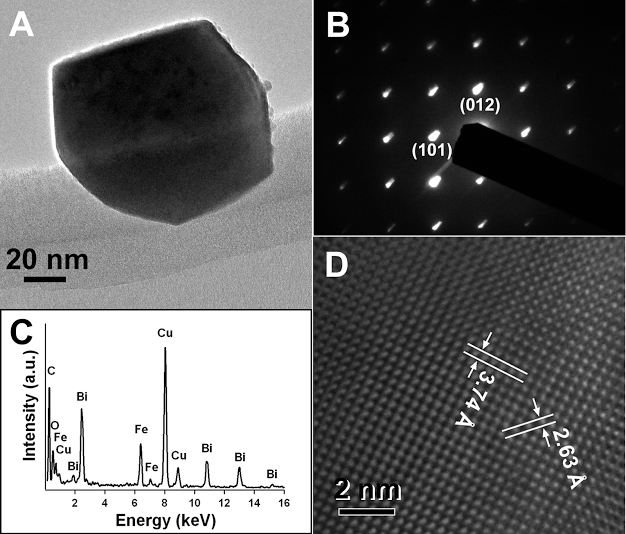 3.  Single-crystalline, submicron-sized Bi 2Fe 4O 9 cubes  of reproducible shape were prepared using a facile, large-scale molten salt reaction in the presence of a nonionic surfactant. The role of surfactant as well as alterations in the molar ratio of Bi 3+ to Fe 3+ precursors were correlated with the predictive formation of different shapes of Bi 2Fe 4O 9 products. 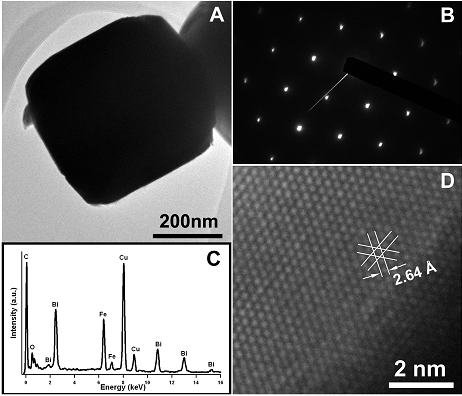 4. Monodisperse nanocrystalline rhombohedral composites of  Fe and Fe 3O 4 magnetic materials  have been obtained employing a reduction reaction, in a flowing gas mixture of H 2 and N 2, of single-crystalline, submicron-sized α-Fe 2O 3 rhombohedral precursors. This synthesis is significant in that we were able to create a nanocomposite with hard and soft magnetic phases juxtaposed within one discrete, anisotropic structure. In turn, the precursor hematite rhombohedra of reproducible shape were successfully prepared using a facile, large-scale molten-salt reaction. Rhombohedra represent a high-surface-area, anisotropic formulation of an industrially important material (iron oxide) which is an active component of gas sensors, photocatalysts, and other types of catalytic materials.

5. We have reported on the Mössbauer spectra and magnetization properties of single crystalline  (BiFeO 3) x -(BaTiO 3 ) 1-x  solid solution nanostructures  in the form of nanocubes, measuring approximately 150 nm to 200 nm on a side, prepared by a molten salt solid-state reaction method in the compositional range wherein 0.5 ≤ ‘ x’ ≤  1.  Powder X-ray diffraction (XRD) and monochromatic synchrotron XRD studies indicate products of high purity, which undergo gradual, well-controlled structural transformations from rhombohedral to tetragonal structures with decreasing ‘ x’.  For all solid solution products, room temperature magnetization studies exhibit hysteretic behavior with remnant magnetization values of  M s  ≥ 0.32 emu/g, indicating that the latent magnetization locked within the toroidal spin structure of BiFeO 3 has been released. Room-temperature Mössbauer spectra show composition-dependent characteristics with decreasing magnetic hyperfine field values and increasing absorption line widths due to a decrease in the magnetic exchange interaction strength with decreasing ‘ x’. For the lowest ‘ x’ = 0.5 composition studied, the Mössbauer spectra show paramagnetic behavior, indicating a Néel temperature for this composition below 300 K. However, room temperature magnetization studies with applied fields of up to 50 kOe show hysteretic behavior for all compositions, including the ‘ x’ = 0.5 composition, presumably due to field-induced ordering. Furthermore, hysteresis loops for all compositions exhibit smaller coercivities at 10 K than at 300 K, an observation that may suggest the presence of magnetoelectric coupling in these systems. 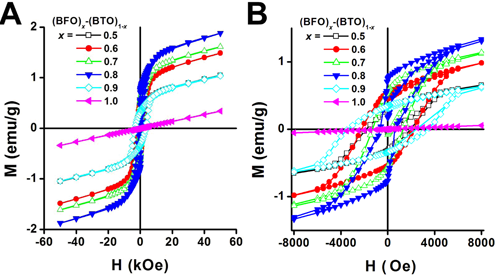 6. In this report,  crystalline elemental Cu and magnetic Ni nanowires have been successfully synthesized through a simplistic, malleable, solution-based protocol involving the utilization of a U-tube double diffusion apparatus under ambient conditions. The nanowires prepared within the 50 and 200 nm template membrane pore channels maintain diameters ranging from ~90-230 nm with lengths attaining the micrometer scale. To mitigate for the unwanted but very facile oxidation of these nanomaterials to their oxide analogues, our synthesis mechanism relies on a carefully calibrated reaction between the corresponding metal precursor solution and an aqueous reducing agent solution, resulting in the production of pure, monodisperse metallic nanostructures. These as-prepared nanowires were subsequently characterized from an applications’ perspective so as to investigate their optical and photocatalytic properties.

7. Multiferroic materials, such as nanostructured  h-YMnO 3, are expected to fulfill a crucial role as active components of technological devices, particularly for information storage. Herein, we report on the template mediated sol-gel synthesis of unique one-dimensional nanostructured motifs of hexagonal phase YMnO 3, possessing a space group of P6 3cm. We found that the inherent morphology of the  as-obtained  h-YMnO 3 nanostructures was directly impacted by the chemical composition of the employed membrane. Specifically, the use of anodic alumina and polycarbonate templates promoted nanotube and nanowire formation, respectively. Isolated polycrystalline nanotubes and single crystalline nanowires possessed diameters of 276 ± 52 nm, composed of 17 nm particulate constituent grains, and 125 ± 21 nm, respectively, with lengths of up to several microns. The structures and compositions of all our as-prepared products were probed by XRD, SEM, HRTEM, EXAFS, XANES, SAED, and far-IR spectroscopy. In the specific case of nanowires, we determined that the growth direction was mainly along the  c-axis and that discrete, individual structures gave rise to expected ferroelectric behavior. Overall, our YMnO 3 samples evinced the onset of a spin-glass transition at 41 ± 1 K for both templateless bulk control and nanowire samples, but at 26 ± 3 K for nanotubes. Interestingly, only the as-synthesized crystalline nanotubular mesh gave rise to noticeably enhanced magnetic properties (i.e. a higher magnetic moment of 3.0 μ B/Mn) as well as a lower spin-glass transition temperature, attributable to a smaller constituent crystallite size. Therefore, this work not only demonstrates our ability to generate viable one-dimensional nanostructures of a significant and commercially relevant metal oxide but also contributes to an understanding of structure-property correlations in these systems. 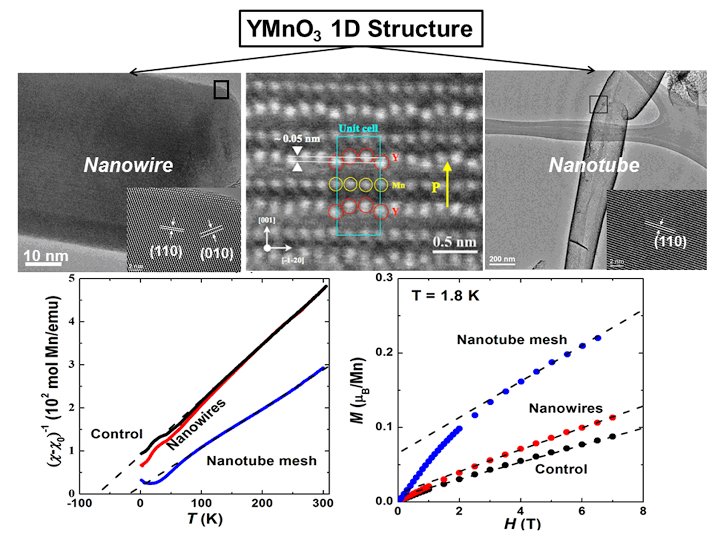 8.   The magnetic spinel ferrites, MFe 2O 4 (wherein ‘M’ = a divalent metal ion such as but not limited to Mn, Co, Zn, and Ni),  represent a unique class of magnetic materials in which the rational introduction of different ‘M’s can yield correspondingly unique and interesting magnetic behaviors. Herein we present a generalized hydrothermal method for the synthesis of single-crystalline ferrite nanoparticles with ‘M’ = Mg, Fe, Co, Ni, Cu, and Zn), which can be systematically and efficaciously produced simply by changing the metal precursor. Our protocol can moreover lead to reproducible size control by judicious selection of various surfactants. As such, we have probed the effects of both (i) size and (ii) chemical composition upon the magnetic properties of these nanomaterials using complementary magnetometry and Mössbauer spectroscopy techniques. The structure of the samples was confirmed by atomic PDF analysis of X-ray and electron powder diffraction data as a function of particle size. These materials retain the bulk spinel structure to the smallest size (i.e. 3 nm). In addition, we have explored the catalytic potential of our ferrites as both (a) magnetically recoverable photocatalysts and (b) biological catalysts, and noted that many of our as-prepared ferrite systems evinced intrinsically higher activities as compared with their iron oxide counterparts.

9. The reproducible gram-scale synthesis of crystalline nanoscale multiferroics is critical for the development of the next generation of commercially relevant electronic devices. Of the subset of multiferroic materials, yttrium manganese oxide (YMnO 3) is highly attractive, due to its large magneto-electric coupling constants and the recent observation of giant polarization under pressure in these types of rare earth manganites. Utilizing a unique synthetic methodology that combines metal-oleate thermal degradation with the use of a molten salt protocol, we were able to reproducibly generate monodisperse distributions of morphologically distinctive yttrium manganese oxides. Specifically, using a molten NaCl flux, we were able to synthesize phase pure,   single-crystalline hexagonal YMnO 3  nanoplates , measuring 441 ± 241 nm in diameter and 46 ± 6 nm in height. Moreover, these nanoplates gave rise to multiferroic behavior, which was confirmed by the observation of a ferroelectric phase from a combination of high-resolution TEM (HRTEM) and selected area electron diffraction (SAED) analysis. Magnetic measurements are consistent with the onset of a spin glass state below 5 K. To highlight the generalizability of the synthetic method we have developed herein, as a demonstration of principle, we have also successfully used the same protocol to produce nanocubes of LaAlO 3. 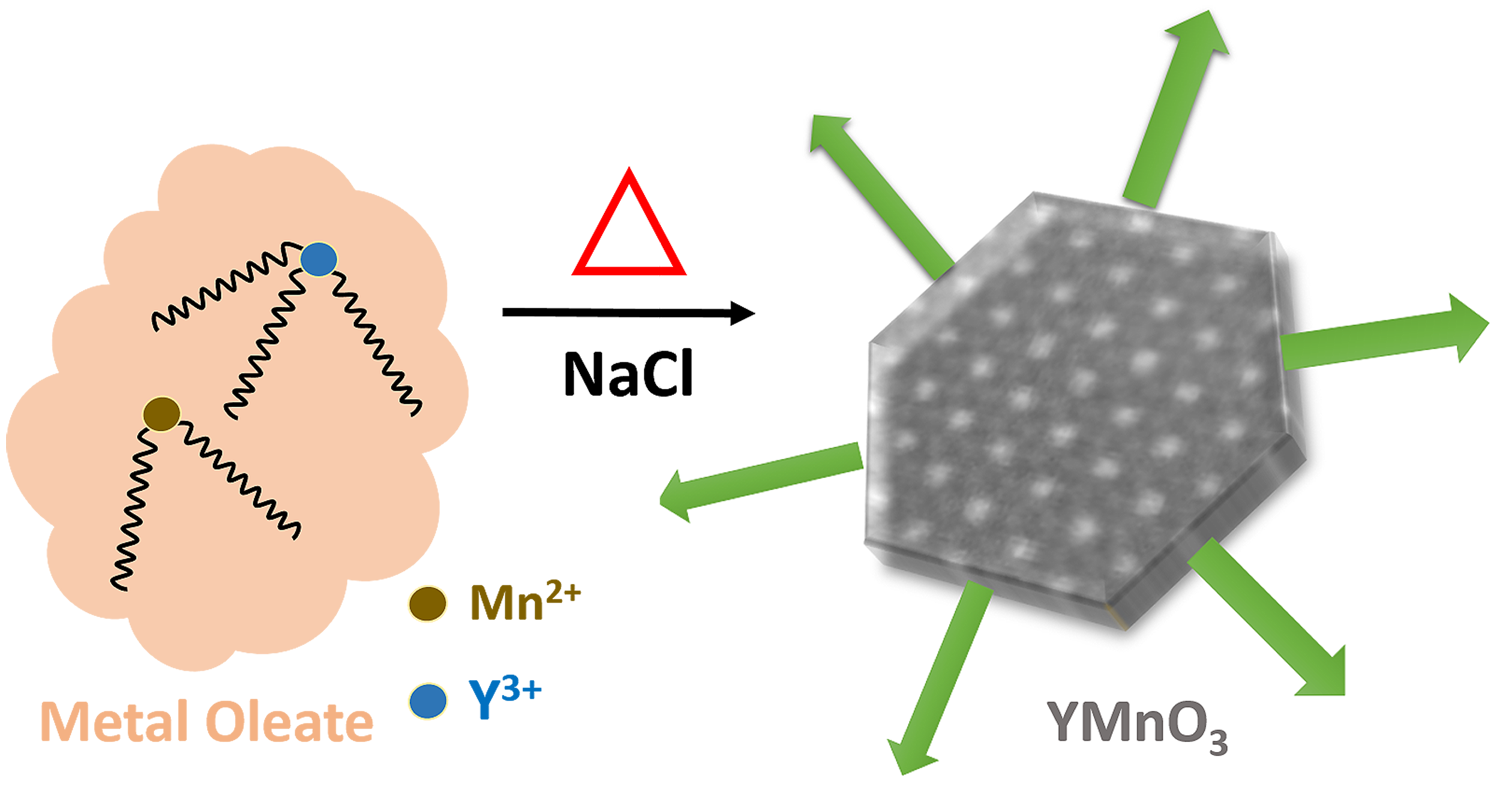 10. In this report, we have synthesized and structurally characterized   nanowire bundles of cobalt-substituted pyroxenes, similar to the crystal structure of Aegirine (i.e. Co-substituted XYSi 2O 6  with X and Y referring to metallic elements such as but not limited to Co, Na, and Fe) , using a readily scalable hydrothermal technique. We propose a growth mechanism for these bundles, based on detailed time and temperature dependent studies as well as complementary control experiments, particularly reactions in the absence of either APTES or NaOH, via a transmission electron microscopy visualization study. Moreover, these nanowire bundles were probed for their magnetic properties and chemical composition using Superconducting Quantum Interference Device (SQUID) measurements, X-ray diffraction, and pair distribution function analysis, respectively. Specifically, SQUID measurement observations highlighted that these bundles evince (i) unique and interesting super-paramagnetic properties at 5 K that are consistent with that of our previously published ~2 nm ultra-small nanoparticles as well as (ii) paramagnetic behavior at 300 K. 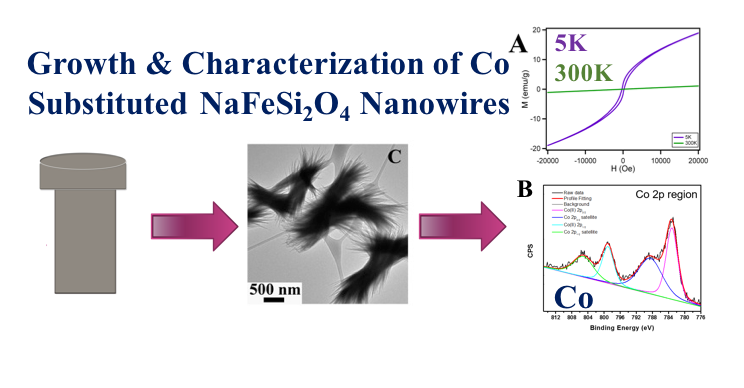