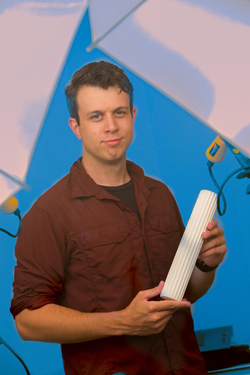 “I wouldn’t be who I am without Stony Brook,” reflects Thomas Kennedy, a fall 2013 transfer student who discovered a passion for math at Stony Brook, and became motivated to pursue a Civil Engineering degree—with a particular focus on earthquake engineering. “I was waiting for that moment,” he adds. “And Stony Brook was able to give that to me.”

Thomas found a supportive mentor in Prof. Ryan Giles, of the Sustainability & Health of Urban Infrastructure Laboratory — the faculty who first introduced him to Civil Engineering, and his professor for both Structural Engineering (CIV 310) and Design of Steel and Reinforced Concrete Structures (CIV 312). Soon after joining the Giles research group in spring of 2016, Thomas began working on the “Experimental Analysis of Polygonal Rocking Columns Subject to Seismic Excitations,” research that was supported this past summer by PSEG through the Explorations in STEM program. Thomas's research seeks to expand our understanding of the behavior of rocking columns as an effective means of dissipating seismic energy—a system well understood by the ancient Greeks who used rocking columns in the Parthenon and other Greek temples, structures that have endured numerous earthquakes over millenia.

Thomas previously attended Hunter College from 2011-2013, where he was a track and field/cross country student athlete but admits he had not really connected with a specific academic discipline or focus. Thomas points out that had he come straight to SB after graduating from Kings Park HS in 2011, though, he might have missed out on the whole civil engineering course of studies, a program which was only recently established and formed into a department in 2015. Thomas will be a member of just the second graduating class of Stony Brook civil engineers. At SB, Thomas has been involved as a peer mentor for the College of Engineering & Applied Sciences, and is the Vice President for the SB Student Chapter of the American Society of Civil Engineers. Thomas plans to pursue a PhD in Civil Engineering and to continue to explore programming/modelling to develop our understanding of sustainable infrastructure design.

Thomas also credits his strong background in construction, with seeing “the bare bones of structures” by having worked in his father’s flooring installation business on many commercial scale projects over the last 5-6 years, with providing a helpful background for his current studies. His hobbies include hiking, camping, backpacking, and long distance, self-supported bicycle touring. The day after presenting his PSEG Explorations in STEM poster at the end-of-summer research symposium, Thomas travelled west to Zion National Park, the Grand Canyon, Joshua Tree National State Park, Black Canyon, Sequoia National Park, … to name a few stopping points on his 17-state tour … before returning to Long Island to resume classes. Below are excerpts of his interview with Karen Kernan, URECA Director.

What is your research project about?
So I’ve been working on a structural engineering project for almost 9 months now with Dr. Giles who is in the Civil Engineering department. Designing structures that are safe is the ultimate goal of a structural engineer.  What our research is focused on, on a fundamental level, is understanding the rocking behavior of structural columns. Our research is inspired by the rocking columns that exist in the Parthenon structure in Greece and other structures of ancient Mediterranean cultures–structures that have survived numerous earthquakes and that rely on multifaceted rocking columns to dissipate seismic energy. A better understanding of the behavior of polygonal rocking columns can provide insight for modern structural systems and design, especially for regions prone to earthquakes, as rocking columns are again emerging as an effective mechanism in modern structural systems. Passive damping systems, such as rocking columns, can reduce the probability of catastrophic failure and help promote sustainable infrastructure.

A lot of my research involves programming, modelling, and doing numerical analysis. We use a high-speed 3D motion capture system to perform our experiments on a shake table – and are testing the effect that shape, magnitude of acceleration, angle of incidence and signal type has on rocking motion and energy dissipation with respect to time.

What have you learned by doing research that you would not have learned from classes alone?
There was a huge learning curve in the type of research that I’ve been conducting with Prof. Giles. I was really able to learn a lot of difficult material fairly quickly from reading graduate level textbooks related to my project and from being introduced to academic journal articles/publications that I probably would never have even have heard of in a classroom setting. And if I had any question, Prof. Giles was able to use analogies and help me understand this cutting edge material. To be exposed to this research and to see where the field is on this particular subject was inspiring. There is a lot that we still don’t know that much about. It’s a topic that I would enjoy pursuing more, even in my graduate studies.

Tell me more about how your mentor has helped you.
Prof. Giles – he’s the best! He’s fantastic. I can’t say enough about him. He’s understanding, and is extremely passionate about what he does. And our relationship is one that I hope to have for many years to come. Whenever I have a question, I know I can always email him –and he’ll respond and help me out.

He’s an amazing professor as well as a mentor. I had my first civil engineering class with him in my junior year, and he really opened our eyes about what a structural engineer is – and how they protect the public. That first class kind of set into motion what I wanted to do … It wasn’t until Dr. Giles’s class that I really knew that structural engineering was it for me. Structural engineering is heavy in math – and it turns a lot of people off. The math is difficult but that’s what I love about it.

What are your long term plans?
I’d like to pursue a PhD in Civil Engineering. I’m also interested in pursuing the programming side of structural engineering – creating software, creating algorithms to solve problems. And I plan to continue my research until I graduate. I’m working now on a paper due in October that Prof. Giles and I will submit for a structural dynamics conference in the spring.

Did you enjoy the experience of getting to do full time research in the summer?
This summer was amazing. We were able to run so much data. We completed over 100 tests. … We filled up over 5 terabytes of space on our hard drives. And in the end, what we found are actually more questions – which, I’ve learned, is what research is. As we explore certain questions, and gain a better understanding – we find there are many more questions to explore along the way. So the direction of our research has actually changed a lot over the course of the summer from what we first set out to do.

How was the PSEG program beneficial to you?
I’ll admit, the money was important. Because I wouldn’t have been able to continue doing research and to be on this path without the funding. But also, the professional development activities were really great.  I learned something new every week. The Alan Alda Center for Communicating Science talk, and the CIE graduate school panel specifically were so helpful.  I didn’t know that much about the process of applying to graduate school beforehand. I also felt like I had a team behind me that was able to support me if I had any difficulties. And that gave me confidence.

The summer program, and research in general, is definitely an experience that I would recommend. I’m a peer mentor now for CEAS – and I now have 3 mentees.  It’s been experiences like Explorations in STEM that have given me the ability to talk about the great opportunities out there. I’ve been telling my mentees to find out about research –it adds such another element to your academic career that the classroom just can’t give you.

Tell me about the experience of presenting a poster.
There aren’t a lot of people with a strong background in my field at these events. But I found that a lot of people approached me simply because of the topic: earthquakes are cool. By answering their questions about my project, it taught me how to explain my research on a basic level. And it gave me a better understanding of my research because I had to look at it from their perspective in order to explain it to them.

What advice do you have for students generally?
I highly recommend going to office hours. It’s an amazing asset to you and it’s free. By going to office hours, you can build a relationship with your professor. And you can learn so much more than by just going to class. It’s within these office hours that you can ask the best question: “What is your research involved with?” That’s the best question to ask a professor because they love their research. And they can talk about that for hours. So it’s a great way to connect with faculty, and possibly to start getting involved with research yourself. I’ve been to office hours in multiple departments. A lot of people are passionate about what they do here. The passion here is really on another level – something I’d never experienced until I came to Stony Brook.

That’s great that you were able to make those connections.
When I came to SB, and I had my first math class – MAT125 with Prof. Remus Radu –there were about 200 people in his class. And maybe 4 people went to his office hours. So I was one of them and I would talk to him about the class and he would help me out. But more importantly hearing him talk about his research on fractals was something that really sparked this passion in math that I have.  I should probably write him a letter to let him know that the class changed my life. And there are other classes too that really had an influence and resonated with me. The MATLAB programming for engineering class taught by Prof. Jon Longtin was amazing – as well as a seminar I attended by Prof. Daniel Davis on the 2011 Tōhoku earthquake/tsunami. And then, there was Prof. Giles’s class which, as I’ve said, is how I got into structural engineering.

Before I came to SB, I didn’t really have direction. I knew that I needed to find my passion. But nothing really clicked. Things were also getting expensive –so I decided to transfer to Stony Brook, and start again. And that was the best decision I ever made in my life. It was at Stony Brook that I found what I wanted to do. I was waiting for that moment. And Stony Brook was able to give that to me.

I learned so much here. There’s so much that SB has to offer students. I came here as a transfer with a blank slate and I was able to really focus on my school work and be successful.  Stony Brook has been great for me.