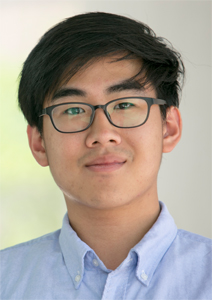 “I can’t really imagine my four years at SB without research” reflects Andrew Seunghyun Lee. “I spent most of my time doing research. And the only reason I did was because I really loved it. Around sophomore year, I was so involved with research that I knew that this was something that I could do for the rest of my life. I just love it.”

Andrew will graduate with a B.S. (Honors) in Psychology in August 2016. While at SB, he has been active in 3 different research groups in Psychology, including those of Dr. Hoi-Chung Leung, Dr. Brenda Anderson, and Dr. Patricia Whitaker-Azmitia. This summer, Andrew received a URECA-Biology Alumni Research award to support his continuing honors thesis work in Psychology with Dr. Whitaker on the “Investigation of S100B-mediated Neuroinflammation in Autism Spectrum Disorder: An Animal Model of Developmental Hyperserotonemia.” His thesis research was also supported with a seed grant from the Association for Psychological Sciences. Since May of 2015, Andrew has been working as an intern/guest scientist with the group of Dr. Henry Evrard at the Max Planck Institute for Biological Cybernetics and Center for Integrative Neuroscience in Tűbingen Germany on “Retrograde and anterograde analysis of prefronto-insular connections in the Macaque monkey.”

Andrew was previously a summer fellow at the National Institutes of Health Laboratory of Neuropsychology where he worked in summer 2014 with Dr. Bruno Averbeck and Dr. Eunjeong Lee on “Reinforcement learning in sequential oculomotor task in macaque monkeys.” He has presented multiple posters at the URECA Celebration (2014-2016); and the Society for Neuroscience national meetings (2014-2015), for which he has received support from URECA travel grants. From November 2014 to May 2015, Andrew served as Vice President for Neuroscience Axis, a student club that promotes interest in neuroscience. Andrew’s future plans include further immersion in research at the University of Maryland School of Medicine working with Dr. Margaret McCarthy to study sex differences in brain development and social behavior. He plans to pursue a PhD in Neuroscience.

Andrew was born in Colorado. At an early age he moved to Korea where he completed his elementary and high school education before coming back to the US to attend Stony Brook University. He had no previous research experience, prior to joining the research group of Dr. Hoi Chung Leung in his freshman year.  Below are excerpts from his interview with Karen Kernan, URECA Director.

Karen. I understand that you’ve been involved with at least 3 different research groups at SB.
Andrew. Yes. I started off with Professor Hoi-Chung Leung’s lab in my freshman year. I’ve been working on a particular project where we look at the interaction between eye blinks and spatial working memory performance. I’ve been working on that for quite a while. I initially joined her lab because I liked her as a professor. She’s a very good mentor. From her lab, I’ve learned so much about how to organize data, how to do science in general, how to do research. Then I joined two other labs (the groups of Professor Brenda Anderson and Professor Pat Whitaker) where I was able to do more animal work -- something that has become a major focus for me.

Sounds as if you’ve had some positive mentoring experiences.
I must say I was very lucky. I owe a lot to Dr. Hoi-Chung Leung and her grad student Pete who was the very first person to mentor me. They’ve guided me through the 4 years of doing research overall. I would email them when I needed advice and they would get back to me right away. Dr. Brenda Anderson and Dr. Pat Whitaker are also always looking out for me and are there whenever I have concerns. They have also had great graduate students who mentored me as well.

You also used your summers well – going to Germany, NIH…
I’ve made some great connections. I spent a summer working at the NIH with a Korean post doc. She knew of another Korean at the Max Planck Institute of Biological Cybernetics in Tübingen, Germany, and gave me some leads on an internship. So I was able to follow-up, and then work with Dr. Henry Evrard in a neuroanatomy lab at the Max Planck Institute.

What was it like doing a research internship in Germany?
It’s a very intense research atmosphere. Everyone is focused on research, rather than teaching. One of the things that was nice was getting to use some of the amazing equipment they had. And I’ve learned a lot in general about anatomy by working with monkeys. But I think it was the whole cultural experience of seeing how labs work in another country that was the most meaningful to me. When you get your project, you have to figure out everything on your own. That was nice in the sense that I could do whatever I wanted: I was able to do different things. Try out different methods. Explore things. But at the same time, I was kind of lost in the beginning. I was working on a topic that I had never really studied.  In that process of figuring things out though, you just learn how to become more independent. That was my biggest gain in terms of academic growth. The whole cultural experience and being able to travel was just great as well. I became more comfortable about myself and thinking about what I really want to do when I graduate.

Did your experience of presenting at national meetings also influence you?
When I first went for Society for Neuroscience and some local conferences in Philly, I found it to be really intimidating. You go there and you realize you really have no idea about neuroscience and what to do there. I thought I knew –but when I went there, I realized I was just kidding myself. I couldn’t even talk or ask a serious question. It was more just an opportunity to go and see what it was like. But later when I was making more progress in research, I went there and was able to interact with students who are presenting and with faculty. People show an interest in you when they’re able to recognize that you are interested. Also the professors here- they would meet their friends from different universities and they would introduce me. That was another way to make connections.

The URECA Celebrations were also helpful in building skills, preparing me for regional/national conferences. I’m not generally a good presenter. But compared to when I first did URECA, I’ve gotten way better. And also this year, I was more confident because the project that I was presenting was part of my honors thesis so I knew everything from back to front. I designed everything from the beginning. Knowing what you’re doing helps your presentation skills.

I know you’ve presented at URECA for several years in a row now....
I always like preparing for URECA. It’s an exciting event. And it forces me to finish all my projects. You get the feeling that you’ve accomplished something. You have this cool poster, and people surrounding you doing the same thing. And it’s also great for me to see what other students are doing. Most of the time you’re just doing your own thing and you don’t know who is doing research, in psychology or other fields. So it’s a great opportunity to bring you out of the lab into this whole group of people doing presentations.

Looking back from the perspective as a senior, how would you say research has enhanced your education?
I can’t really imagine my four years at SB without research. I spent most of my time doing research. And the only reason I did was because I really loved it. Around sophomore year, I was so involved with research that I knew that this was something that I could do for the rest of my life. I just love it. It’s exciting every day. You get weeks where you get nothing and you have no results. And then there are weeks where you forget about all those bad days and it’s just totally worth it.

What are your future plans?
I see myself in a PhD program. I can’t think where else I would go. I will be working as a research assistant next fall, and then apply to PhD programs in Neuroscience

Did the Psychology honors program also help you prepare?
I think it’s a great program – and you get feedback on writing personal statements, applying to graduate school, etc. But the best thing was that we were all friends. It was really nice to have a group with the same interests, and to be able to meet every week and discuss what was going on.

Neuroscience Axis was also great for me to get to know more students in the school. When I got involved, I was able to expand my friend group to different people on campus. It was a turning point for me, getting more social and meeting new people.

What advice do you have for other students?
I think the most important thing is not to be afraid. It sounds a little bit simple. But the reason why I was able to get to this point is that I was never afraid to ask questions. I would constantly go and ask questions to graduate students and professors. I did not care what they would think; I needed to learn. So my strongest advice is to ask questions, always get help. We’ve all gone through the stage where you have no idea what’s going on, and are surrounded by people throwing these terms out that you’ve never heard of. That’s when you need to talk with the graduate student or the faculty that you’re working with.  I sometimes say, “I have no idea what’s going on. Please explain.” You have to remind them that you’re an undergrad, that you need mentoring and you don’t know things. And be bold about that. Even for me as a mentor to other undergrads, I sometimes forget that they don’t know certain things because by now I’ve done something so many times.

It’s also important for students to talk with the faculty and show that you are eager to do these projects, eager to help out and learn more and be involved in the lab. You have to step up and show that you really want to do more of the scientific research, beyond what may seem like tedious work (coding, inputting data). A lot of students have the idea when they first join research that they’re immediately going to get this project and do cool things. Some students think they will jump right in…but it’s a long process and you really have to work your way up. That was my experience. I worked my way up. I did these small things, and kept showing that I want to do more. I kept reading papers, talking with the graduate students and professors. When they recognize that you’re really serious, then they start to give you more things to do, more responsibility.

Anything else to add?
I just want to acknowledge URECA. It’s been a big part of my research experience here. Without that, I wouldn’t be able to go to conferences, first of all.  And to get support for the summer has really helped me a lot. I encourage more students to apply!