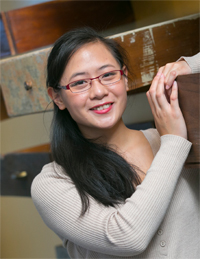 For Amy Dang, an Asian & Asian American Studies major now graduating summa cum laude (Dec. '15), doing a senior research class project in her last semester at SB was a challenging, fulfilling, and personal experience. Amy’s capstone project for AAS401: Senior Seminar in Asian & Asian American Studies focuses on the Chinese tea culture, beginning with an exploration of the Bai tea ceremony and tea cultures and values in other Chinese ethnic minority groups; and expanding to an investigation of how tea facilitates relationships worldwide (spiritual, social, political, and economic). The final product was a poster, and a class presentation. For her AAS project, Amy worked with Dr. Peg Christoff, the course instructor; and consulted with Dr. Gregory Ruf and Dr. Timothy August of the Cultural Analysis and Theory Department. Amy reflects that though she was an American-born Chinese, she had never realized the full significance of tea to her or to her family until she worked on this project: “I loved this project. I was more engaged in it because I had some personal background and experience in it. So I feel more connected to my culture …”

The project also drew upon some previous experiences, including a visit Amy made to China in summer 2012 where she was introduced to the Gong Fu tea ceremony practice by her uncle. Amy also became steeped in tea culture by working at Teavana during 2013-2014. At SB, Amy has enjoyed being able to enhance her understanding of Chinese history and culture in her major and has earned top honors: she was inducted to Phi Beta Kappa, and is the recipient of the Shi Ming Hu Memorial Endowment for Leadership & Eli Seifman Chinese Studies Awards. Amy enjoys creating art (especially watercolor and ink on canvas, as well as digital art) and has taken studio classes every semester. A resident of Nyack, NY, Amy transferred from Rockland Community College in 2014, and is the first in her family to earn a college degree. Below are excerpts from her interview with Karen Kernan, URECA Director.

Karen. Tell me about your current research.
Amy. I researched Chinese tea culture: how tea travelled from China to other parts of the world, how other countries responded to tea, and how tea is used to represent an individual’s or country’s values and beliefs in their tea ceremonies. When people drink tea they share a sense of commensality and they form a kind of bond when they talk over tea and they have this experience that they share together. And then there’s that spirituality aspect of it that originated from China that comes partly from Buddhism, Daoism, and Confucianism. Tea plays an intricate role in cultural values as tea becomes intertwined with poetry, art, identity, religion and spirituality. There’s also the political aspect where tea trade and politics are involved. Sometimes tea can bond certain countries...So for my project, I looked at how tea is reflected in people using it and how it facilitates a relationship outward and inward from individual to people to people.

What got you started on this research topic?
For the Asian seminar class we were given free choice of a topic to do research on. Originally I wanted to do an ethnographic study on different Chinese ethnic minorities and how they performed tea ceremonies. I was intrigued by this Bai minority group that practices a 3 course tea ceremony. They have a really interesting way of expressing their values through the tea ceremony. There's three cups showing the three vicissitudes of life: The first cup has a bitter taste to represent the obstacles and challenges that everyone faces at one point or another in their life, the second cup has a sweet taste to represent triumph of overcoming the obstacles, and the third cup has a strong aftertaste to represent reflection on how far one has grown since they encountered that obstacle.  I first learned about the Bai tea ceremony from a Chinese course I took at Rockland Community College.

Was it difficult to narrow down your topic?
If I started with the topic of tea in general, it would have been unmanageable. But for me, I started out with a really narrow focus on the Bai tea culture and then I slowly expanded my research outward. Initially I wanted to explore other tea ceremonies that were similar to the Bai and how they had meaning and cultural values embedded into it. But I couldn’t find enough material written in English to pursue this topic in depth. To do a proper study, I would have to go to China and to study sources that are not available to me in English (and I would need to become more fluent in Chinese). So my project topic switched around a little, and I ended up primarily focusing on how tea went around the world, and how tea facilitates relationships in several aspects: spiritual, social , political and economics.

Tell me about your research process/methodology.
I looked online first to see what’s available, what kind of articles were there. I also looked at a lot of newspaper articles, and books on Chinese culture and Chinese tea. From there I went to talk to Professors Gregory Ruf and Tim August. Professor Ruf gave me insight on the different ethnic minorities around the area that I want to focus on initially, including the Bai. Professor Tim August focuses on food culture and the meaning behind food and gave me some recommendations as well. And Professor Christoff was very helpful. Whenever I came to her office, she would always have a bunch of literature ready for me--many articles on tea. She was really helpful throughout the whole process.

What was the output or end product for the class: a paper, or a class presentation?
Actually, we all worked on a website proposal, which we had to write up in three ways: a graphic poster, an audio recording pitching our website idea; and a written proposal. The poster that I made is essentially a website proposal showing a timeline of how tea developed over time, and including interactive/storytelling components. I wanted to include illustrations/comics of how tea formed relationships between people (…ever since I was little I really wanted to make my own comic...),  because that way people will become more engaged at looking at the website. 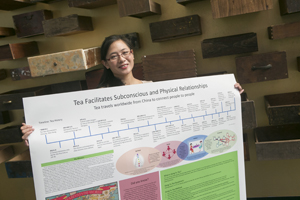 Had you done a poster before?
No, this was my first.  As a humanities major, it's not something you’re typically used to doing because mostly you are involved in doing papers or presentations. I was surprised to realize all the aesthetics involved in making a poster. The poster can’t be too wordy. You want to have a good amount of information but it has to be eye catching. Initially when I did my first draft, it was too wordy and I had to cut down on the text. It was a valuable process to go through. We all had to do several different layouts for the class, and the whole class critiqued each other’s layouts and gave feedback that was helpful. I like the end result, which was a compromise, or combination of several of the earlier layouts.

Did you enjoy doing this senior project?
I did! I loved this project. I was more engaged in it because I had some personal background and experience in it. So I feel more connected to my culture after looking into so many readings…
The research itself was the most intricate project I’ve taken on so far throughout my college career, in terms of the literature and the reading. And I enjoyed exploring the idea of commensality and how people can form bonds through the smallest action. I was interested in the articles I found about tea having a meditative purpose, and can help people focus on the present moment, rather than being so caught up as we are in the modern world, especially in the west, with the future. I had never realized how important tea was in my family. We drink tea a lot. And tea is something that we give and get from other family members. I just never fully realized its full importance until I looked into it.