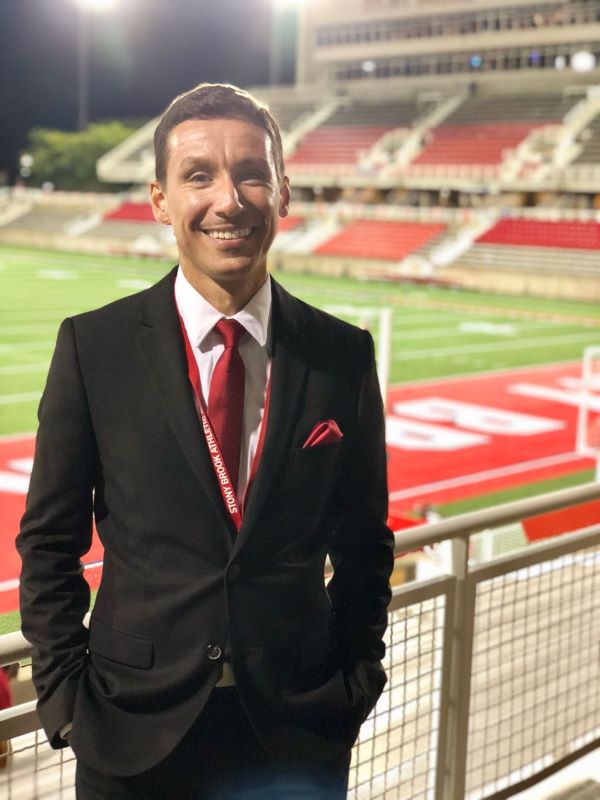 DR. JUSTIN R. STOLARIK serves as Director of Bands at Stony Brook University, where he oversees all aspects of the NCAA Division 1 FCS Athletic Bands Program and conducts the Wind Ensemble. As an active freelance musician and conductor in New York City, he has served as Associate Conductor of the Manhattan Wind Ensemble, Resident Guest Conductor of the Kings County Concert Band, Artistic Director of the National Lesbian & Gay Marching Band, Assistant Director and Conductor of the Lesbian & Gay Big Apple Corps Symphonic Band, and as a percussionist with the Brooklyn Wind Symphony (BKWS). Performances with the BKWS in 2015 took him to Carnegie Hall and to the World Association for Symphonic Bands and Ensembles (WASBE) International Conference in San Jose, California. Before arriving at Stony Brook in 2018, Dr. Stolarik served approximately 700 real estate agents as Market Center Administrator of Operations (Chief Operating Officer) at Keller Williams New York City.

Prior to New York, Dr. Stolarik served as Associate Director of Bands and Director of Athletic Bands as the Gene Braught Chair of Music at the University of Oklahoma, and served as Assistant Director of Bands at both the University of Wisconsin-Madison and Henderson State University (Arkansas). His wind and percussion arrangements have been performed by athletic bands at football and basketball games around the country before audiences of over 80,000. In addition to athletic bands, he has arranged for the Dallas Winds and the University of Texas Wind Ensemble. Dr. Stolarik has worked with such notable performers as will.i.am (Black Eyed Peas), Everlast (House of Pain), Tom Wopat (Dukes of Hazzard), Ed Shaughnessy (The Tonight Show with Johnny Carson), Allee Willis, Carolyn Wonderland, Roky Erickson, Ray Benson (Asleep at the Wheel), Jerry Jeff Walker, and Ghostland Observatory.

Dr. Stolarik completed his Doctorate of Musical Arts and Master of Music degrees in Percussion Performance at the University of Texas at Austin, and his Bachelor’s degree in Music Education, with Highest Honors, at the University of Florida. While at UT, he performed with the UT Wind Ensemble at Carnegie Hall in 2005 for the World Premiere of John Corigliano’s Symphony No. 3 “Circus Maximus,” and as part of a seventeen-day five-country European tour in 2008, featuring the same work. He can be heard as timpanist on the World Premiere recording, available from Naxos Classical. During his years at UF, he was a three-year Front Line member of the Madison Scouts Drum and Bugle Corps (2000-2002), and was two-time Drum Corps Midwest and Drum Corps International Timpani Solo Champion (2001 and 2002). He was featured in issues of Percussion News and Modern Drummer for his solo performances. He later served on the Madison Scouts staff as Front Line Instructor in 2003.