The Inaugural Year: 2006-2007
The Spirit of Stony Brook was founded in September 2006 at the request of then-President Shirley Strum Kenny, by a committee chaired by Jerrold Stein (Dean of Students and Associate Vice President for Student Affairs), and included Perry Goldstein (Director of the Undergraduate College of Arts, Culture, and Humanities), Jim Fiore (Athletic Director), and Josh Cheuvront (Graduate Student Assistant). They named John Leddy—a well-known and successful Long Island music educator—to be the first Director of Athletic Bands.
A three-day band camp was held September 1-3, 2006, during which twenty courageous and enthusiastic musicians came together and formed an indelible bond. Navneet Singh was selected to be the first Drum Major. They survived rehearsals during the height of Tropical Storm Ernesto, and presented their first public performance to 5,000 incoming freshmen and transfer students at New Student Convocation on September 3.
Band uniforms arrived on October 3 and members were quickly fitted over the next two days, in time for the band’s debut performances at Wolfstock 2006—Stony Brook’s Homecoming Weekend—on October 6 and 7. The band performed through Woodstock Village at the Homecoming Parade, and for halftime at the football game.
The band grew close and organized a pasta party the night before the final football game on October 28. Their first season formally ended with a banquet held in the Wang Center on November 28, with President Kenny in attendance. 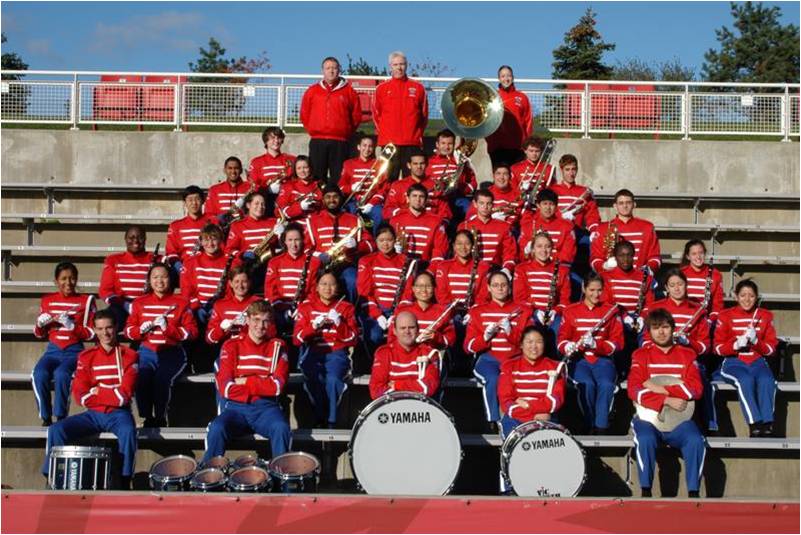 Many changes accompanied the band's second year. The season began with its first weeklong band camp, including a two-day retreat for the Leadership Team. The program was proud to open its newly-renovated band area, which had storage for all instruments and uniforms, as well as a lounge and practice space for its members.
During the football season, the band performed a pregame show featuring the fanfare from “Ben-Hur,” the Victory Song, and Sandy Shore (alma mater), with the band’s first drill. The band performed two halftime shows over the course of their five home football games—a Blues Brothers show and a Billy Joel show.
The band's size more-than-doubled to 70 members in its second season. The program added Jen Bigus as the color guard instructor and Jeffrey Butterfield as the drumline instructor, and included graduate student staff Josh Cheuvront and Shayna Corapi.
The band continued to perform at all home men’s and women’s basketball games, and traveled to the America East Tournament for both teams in March. In addition, the band served as the official pep band for the New York Dragons of the Arena Football League. The band played at all home Dragons games in Nassau Coliseum, and was presented with its first scholarship donation of $25,000.
"So Far, So Fast." President Kenny often used this expression to describe the rapid growth of Stony Brook University and its quick ascension as an elite research university. It also describes the progression of the marching band from the “Original 20" members at the first band camp in August 2006, to its rapid growth in its second year. The program reached an important milestone late in July 2008 when registration reached 100 members.

After two successful seasons, the Stony Brook Marching band was well on its way to becoming an established part of the Stony Brook campus, creating many of the traditions that still remain today. In its third season, it officially took the name “The Spirit of Stony Brook” (SOSB).
In Fall 2009, Shayna Stahl was appointed the first Assistant Director of Athletic Bands, after serving as a graduate assistant since the band’s formation in 2006. Also in 2009, SOSB introduced its first High School Band Day, joined on the field and in the stands by the Longwood High School and Brooklyn Automotive High School Bands. The following year, the Rocky Point High School Marching Band joined the bands from Longwood and Brooklyn Automotive. This continued through 2012 with students from Rocky Point, Ronkonkoma, Manhasset, Mechanicville, Farmingdale, and Connetquot, all joining SOSB on the field and in the stands for one select football game each fall season.
SOSB began to perform off campus at parades and other high profile performances, including a filming of Extreme Makeover: Home Edition in 2010; and then in 2011 for their first appearance in New York City’s Columbus Day Parade (and for the next three years), appearing in a New York State Lottery Commercial, and making their first-ever appearance in the Men’s Basketball America East Championship. Since then, the band has enthusiastically supported the basketball teams at every home basketball game, and has made several appearances in the postseason Men’s and Women’s America East Basketball Finals.
In May 2013, John Leddy retired from his role after seven years as Founding Director of Athletic Bands, and became Director Emeritus.

Shayna Stahl was named Director of Athletic Bands in Fall 2013 after previously serving as Assistant Director of Athletic Bands since 2009. She grew the band to its largest size ever and SOSB traveled to the University of Connecticut and Villanova for football, and to Iowa with the basketball team.
The band’s involvement with the basketball team continued to grow, and SOSB played at the ribbon cutting ceremony for the newly-renovated Island Federal Arena in October 2014. Soon after, they played and cheered Stony Brook Basketball to its first America East Men’s Tournament win and an NCAA berth. A select group of band members traveled alongside the Men’s team to Des Moines, Iowa for their first-ever NCAA tournament appearance.
Outside of football and basketball, SOSB performed in a Pepsi Super Bowl Halftime commercial in 2014, and accompanied Walk the Moon in a performance of “Shut up and Dance” during Stony Brook’s annual fall concert in 2015. One month later, the band went viral on Instagram, performing the Thriller dance during a halftime show on Halloween.
In Summer 2016, Stahl helped facilitate SOSB’s first year of involvement representing the entire State University of New York system in the Annual New York City Pride Parade. Vincent Malafronte, who had been heavily involved with the band, was appointed Assistant Director of Athletic Bands. After seven total years of service to the Athletic Bands, Stahl left Stony Brook to pursue a doctoral degree in wind conducting at the University of Washington.

In the Summer 2016, Dr. Christopher Parks was chosen to take over as the Director of Athletic Bands, immediately following Shayna Stahl’s departure. Dr. Parks previously served ten years as Director of Athletic Bands and Music Organizations at Boston University. During his time at BU, he was contacted by SOSB Founding Director John Leddy for input while establishing the Stony Brook Athletic Bands program. Dr. Parks was now the first Director of Athletic Bands at Stony Brook who was not directly involved in the program since the band’s 2006 inception.
During his time at Stony Brook, the band traveled to Temple University in Philadelphia to perform its first away football game in two years; performed its first non-parade exhibition performance at the Mineola High School Marching Competition; High School Band Day was reestablished, and SOSB was joined by the Three Villages Marching Band; performance involvement in May commencement was increased; and the band performed in the 2017 NYC Pride Parade its second consecutive year.
In Summer 2018, Dr. Parks left Stony Brook to spend more time with his family.

A Look Back and a Vision Forward (2018-Present)

In September 2018, Dr. Justin R. Stolarik was hired as Interim Director of Athletic Bands, following the departure of Chris Parks.
Previously serving as Director of Athletic Bands at the University of Oklahoma, and as Assistant Director of Bands at the University of Wisconsin-Madison, he brought with him a strong background of experiences with NCAA Division 1 FBS marching bands in the SEC (Florida Gator Band), Big XII (Texas Longhorn Band and Pride of Oklahoma), and Big Ten (Wisconsin Band) conferences.
Dr. Stolarik immediately placed a strong emphasis on marching and drill precision—mixing traditional and corps-style techniques—while elevating the band’s playing style and skill. By the end of his first year, he expanded the band’s active repertoire to more than seventy-five tunes, and concluded the year with the Inaugural Spirit of Stony Brook Spring Concert, drawing 750 spectators.
After a national search in Summer 2019, Dr. Stolarik was officially appointed as Director of Athletic Bands. His first duty, though returning to the band for his second year, was to continue the band’s participation in the NYC Pride Parade, at WorldPride—this time, opening the opportunity for other SUNY school band members to participate alongside members of the SOSB.
August 2019 was Dr. Stolarik’s first Preseason (formerly Band Camp) with SOSB. It was more intense than previous years, with a focus on marching and musical precision. A new traditional pregame show was written, which included the return of run-on from the tunnel, and incorporated a newly-composed opening fanfare, all of the school songs, each game’s opposing team fight song, the newly-introduced “Wolfie Spell-Out,” and the inclusion of America, the Beautiful. For the first time in the band’s history, SOSB prepared a new halftime show for every home football game—which meant seven new and unique shows, including the introduction of the Stony Brook Finale to conclude the final halftime show.
Dr. Stolarik’s goal since his arrival has been to create new ways of engaging the campus community, by promoting spirit and fan interaction at athletic and other events across campus, while increasing the precision and overall performance quality of the band.

Learn More About Each Year of the Marching Band Below! 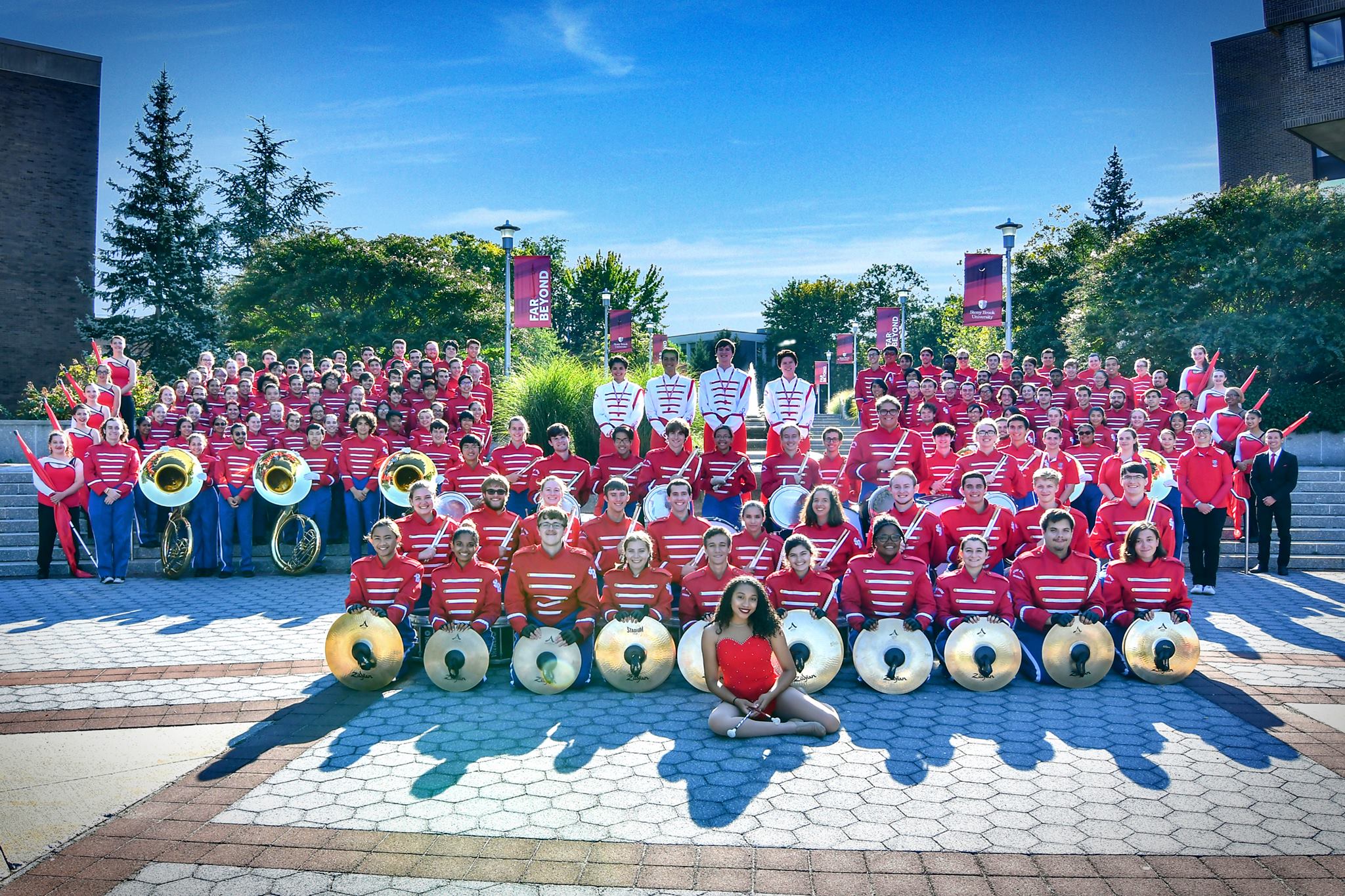 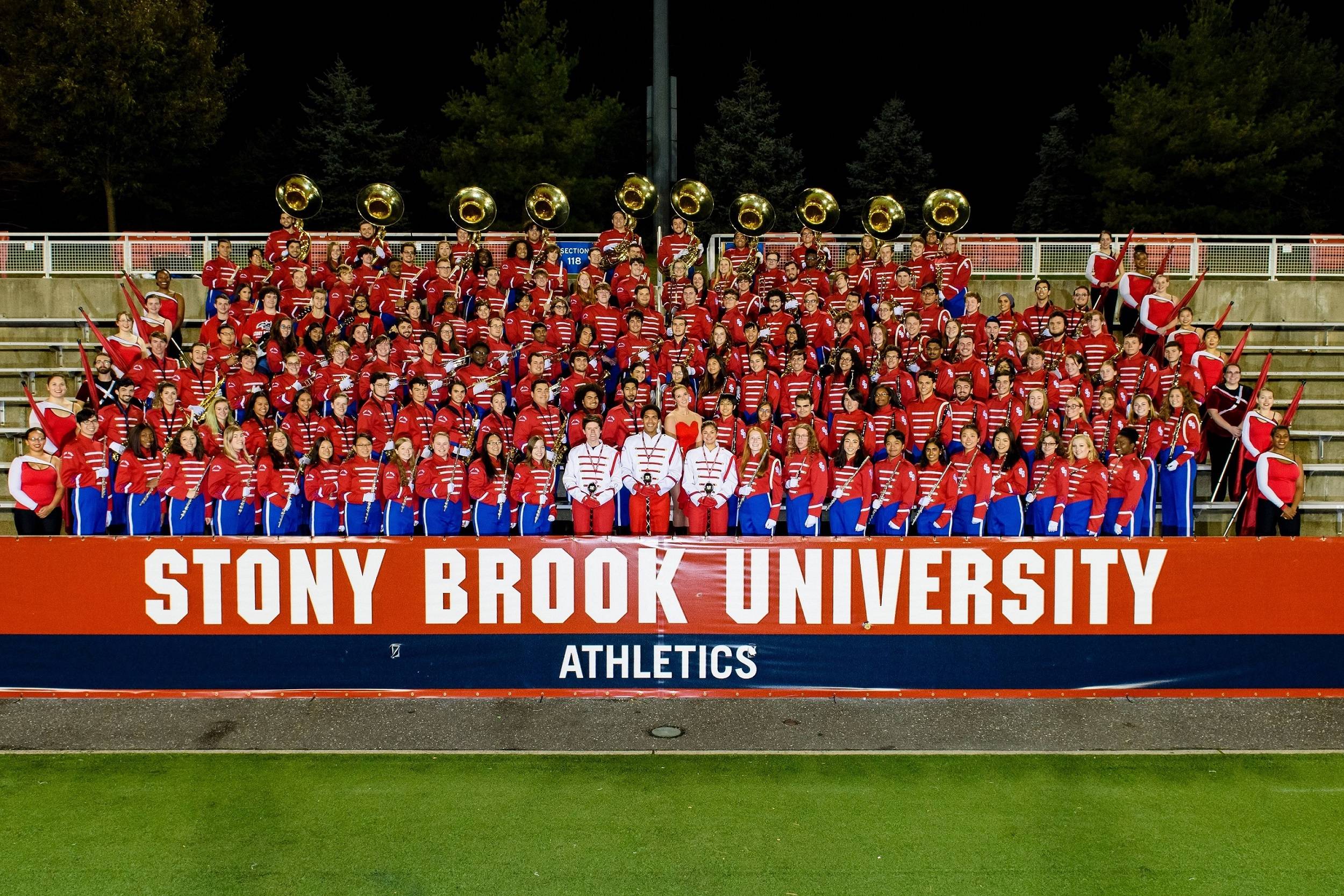 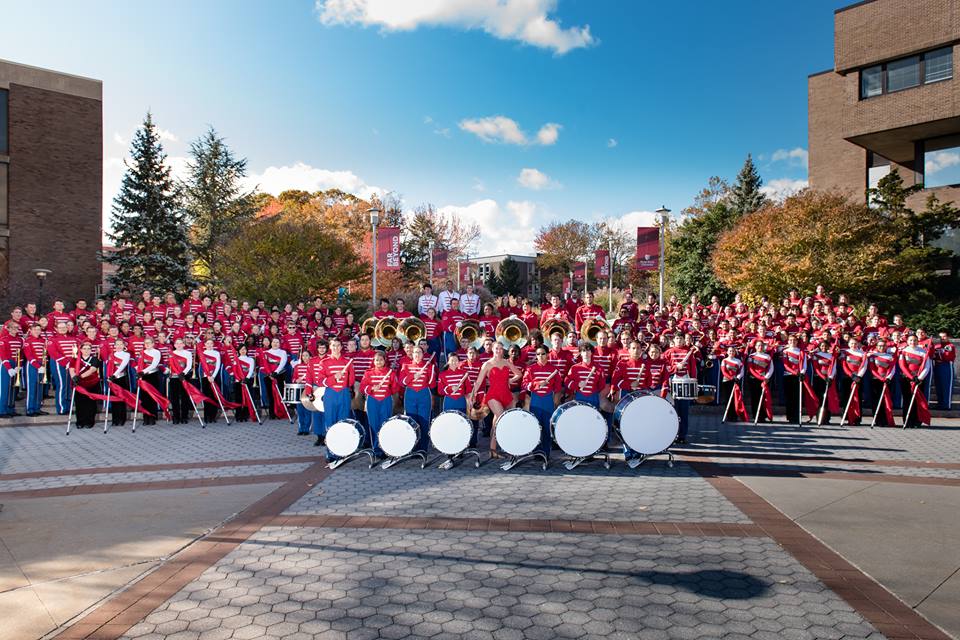 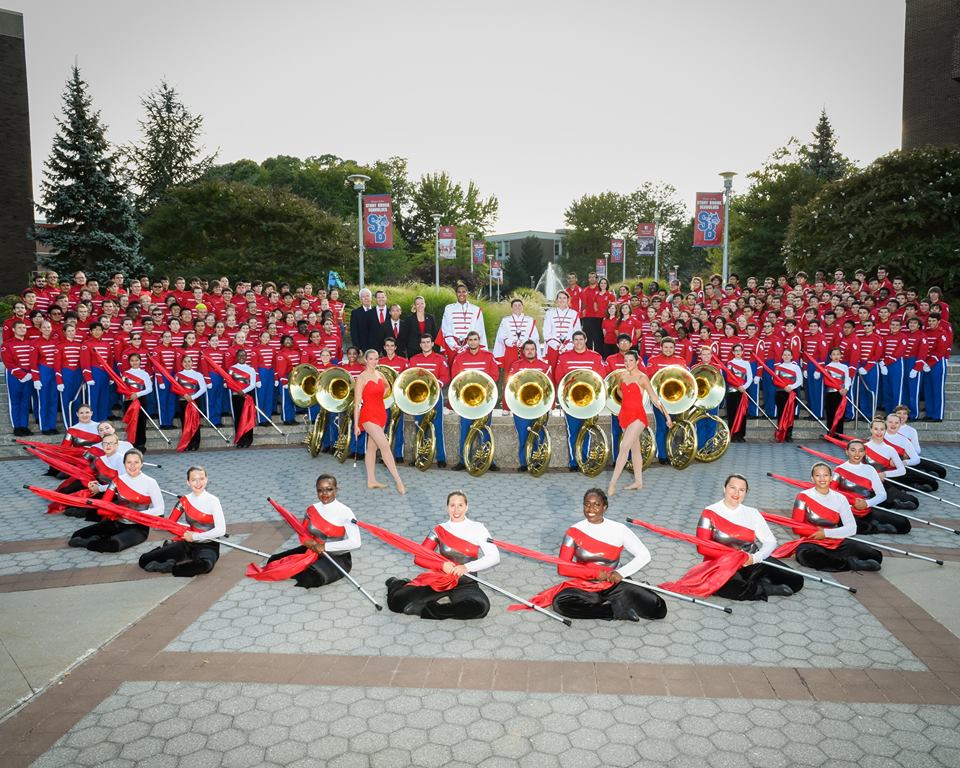 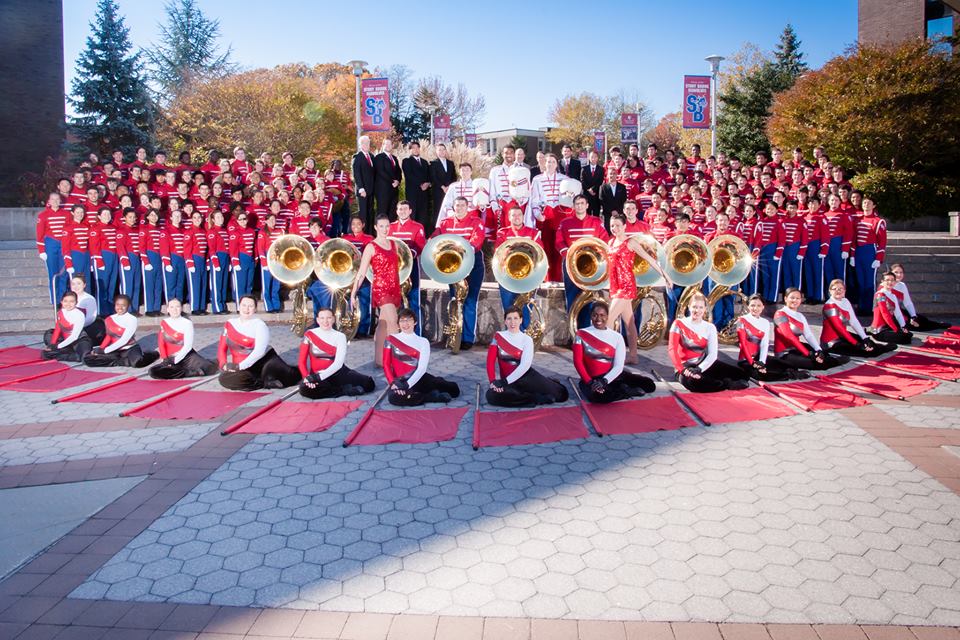 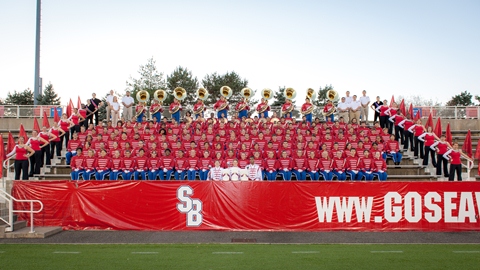 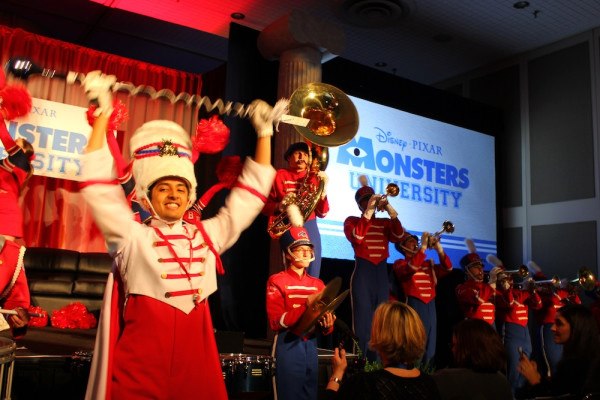 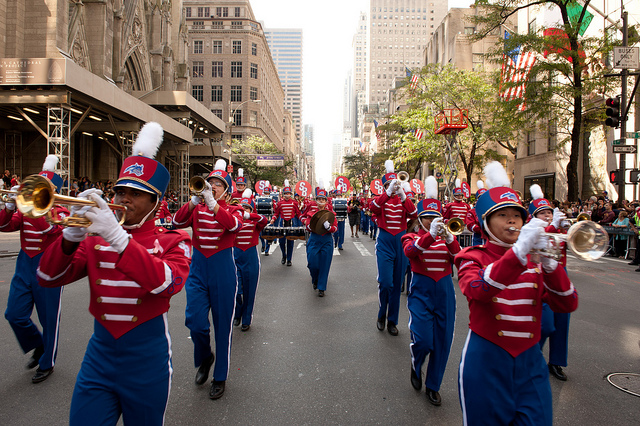 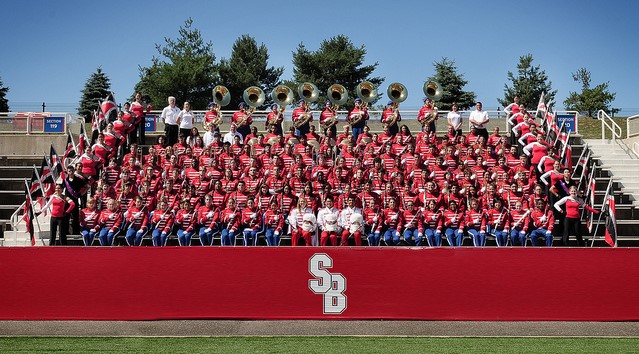 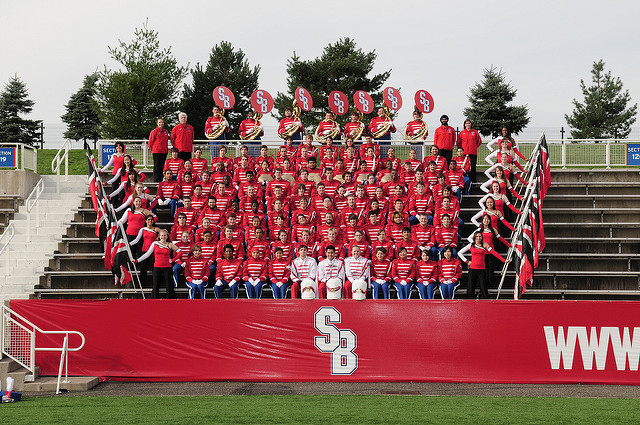 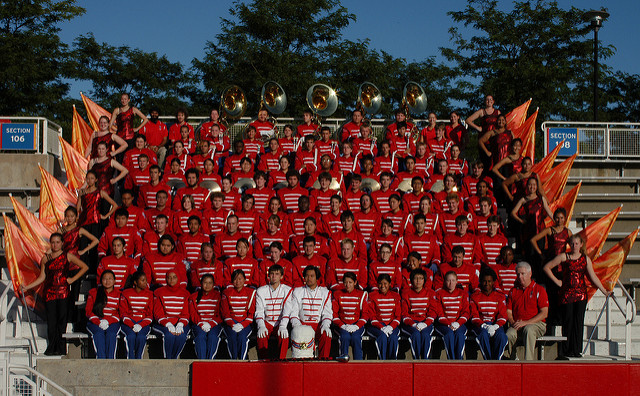 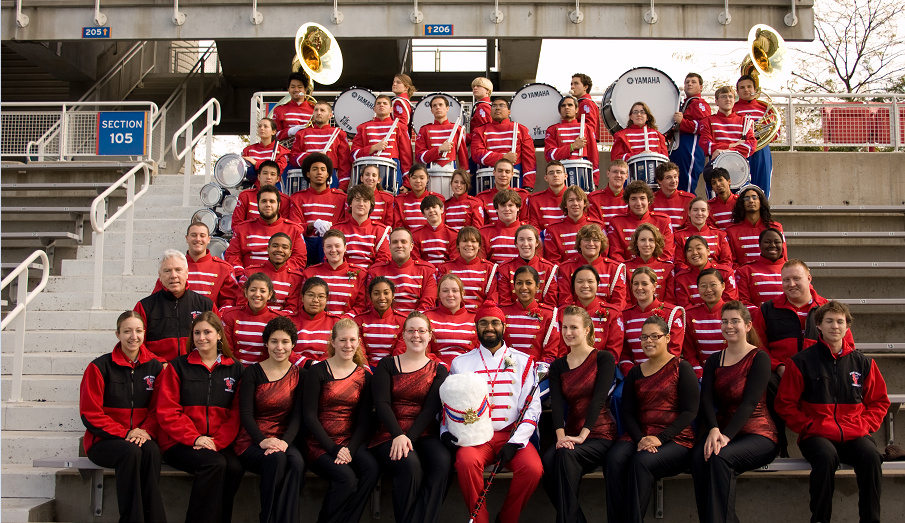 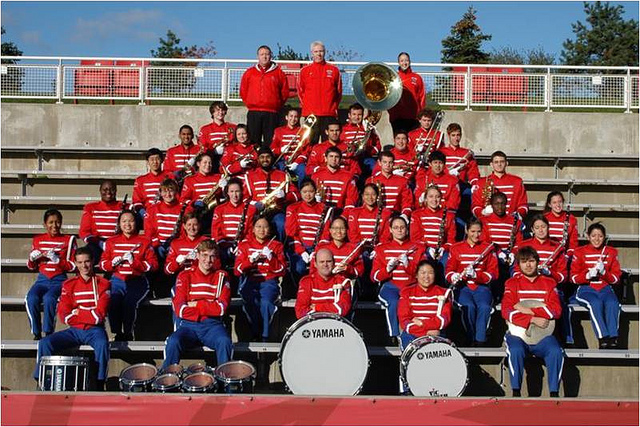 The band’s history is continually evolving and we need your help to make sure we get it right. See a mistake or something that is missing? Fill out this form and we’ll add it!