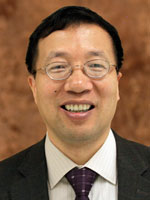 Interim Provost and Senior Vice President for Academic Affairs
Dr. Zhang has been a member of the School of Marine and Atmospheric Sciences (SoMAS) faculty since 1990 and currently holds the title of SUNY Distinguished Professor. He served as Dean of SoMAS from 2010-2016, Associate Dean from 2003-2010, and Director of the Institute for Terrestrial and Planetary Atmospheric Sciences.

Dr. Zhang has published in over 140 peer-reviewed articles in top scientific journals, including Science. His research has been supported by over $20 million of cumulative funding from agencies such as the National Science Foundation, the National Administration for Space and Aeronautics, and the U.S. Department of Energy.

Zhang is a Fellow of the American Meteorological Society, an honor bestowed to only the top 1% of its members. He was a member of the Intergovernmental Panel on Climate Change that shared the 2007 Nobel Peace Prize with former Vice President Al Gore.

His research focus is in numerical modeling of climate and global climate change. The scope of his work includes the development and analysis of parameterization components in general circulation models, the diagnostic study of physical processes and feedback processes in the climate system, and the modeling and analysis of past and future climate changes. His innovations in climate modeling are considered highly influential in the field.