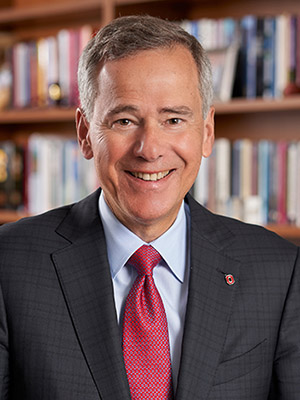 Previously executive vice president and chancellor for health affairs at The Ohio State University and chief executive officer of the Ohio State Wexner Medical Center, Paz works in partnership with academic, hospital and clinical leadership and with community partners to ensure the continued development of a premier academic medical center and health system.

At Ohio State, where he was also a professor of medicine and public health sciences, Paz  was responsible for seven health science colleges including more than 20 research institutes and an NCI-designated comprehensive cancer center. He also served as CEO of the Ohio State Wexner Medical Center, a health system that includes seven hospitals, 16 network hospitals, more than 100 outpatient sites, a multispecialty practice, an accountable care organization and a health plan.

A member of the National Academy of Medicine’s Leadership Consortium and the board of directors of Research!America, Paz has nearly 25 years of leadership in health care and academic medicine. Prior to joining Ohio State, he was the executive vice president and chief medical officer for CVS Health/Aetna where he provided clinical leadership for the company’s domestic and global businesses. He was also a professor adjunct of internal medicine at Yale University School of Medicine. Prior to his experience in the private sector, Paz served as senior vice president for health affairs, dean of the college of medicine at Pennsylvania State University, and CEO of the Penn State Hershey Medical Center and Health System.

Dr. Paz received his bachelor’s degree from the University of Rochester, a master of science in life science engineering from Tufts University and his medical degree from the University of Rochester School of Medicine and Dentistry. He completed his residency at Northwestern University, where he served as chief medical resident. Dr. Paz was a Eudowood Fellow in pulmonary and critical care medicine at Johns Hopkins Medical School. In addition, he was a postdoctoral fellow in environmental health science at Johns Hopkins School of Hygiene and Public Health.