Terence Netter (1929-2018) met Lee Krasner in 1964, when, as an MFA student at George Washington University, he visited her home and studio in Springs. At the time he was a member of the Jesuit Order, and was profiled in The New York Times as “A Priest Who Paints.” After leaving the priesthood to marry, Netter served on the faculty at Santa Clara University and Choate-Rosemary Hall, and in 1979 became the founding director of the Stony Brook University Fine Arts Center. It was through his friendship with Krasner that the Pollock-Krasner House and Study Center was deeded to the Stony Brook Foundation.

In 1997 Netter's work was featured at Stony Brook University Art Gallery in an exhibition titled "Visions and Revisions." Inspired by that show, this selection of his paintings  illustrates his penchant for revising earlier work, a signature practice of Krasner’s. Whether or not her approach influenced him, the two artists shared a devotion to the creative life not unlike taking holy vows. 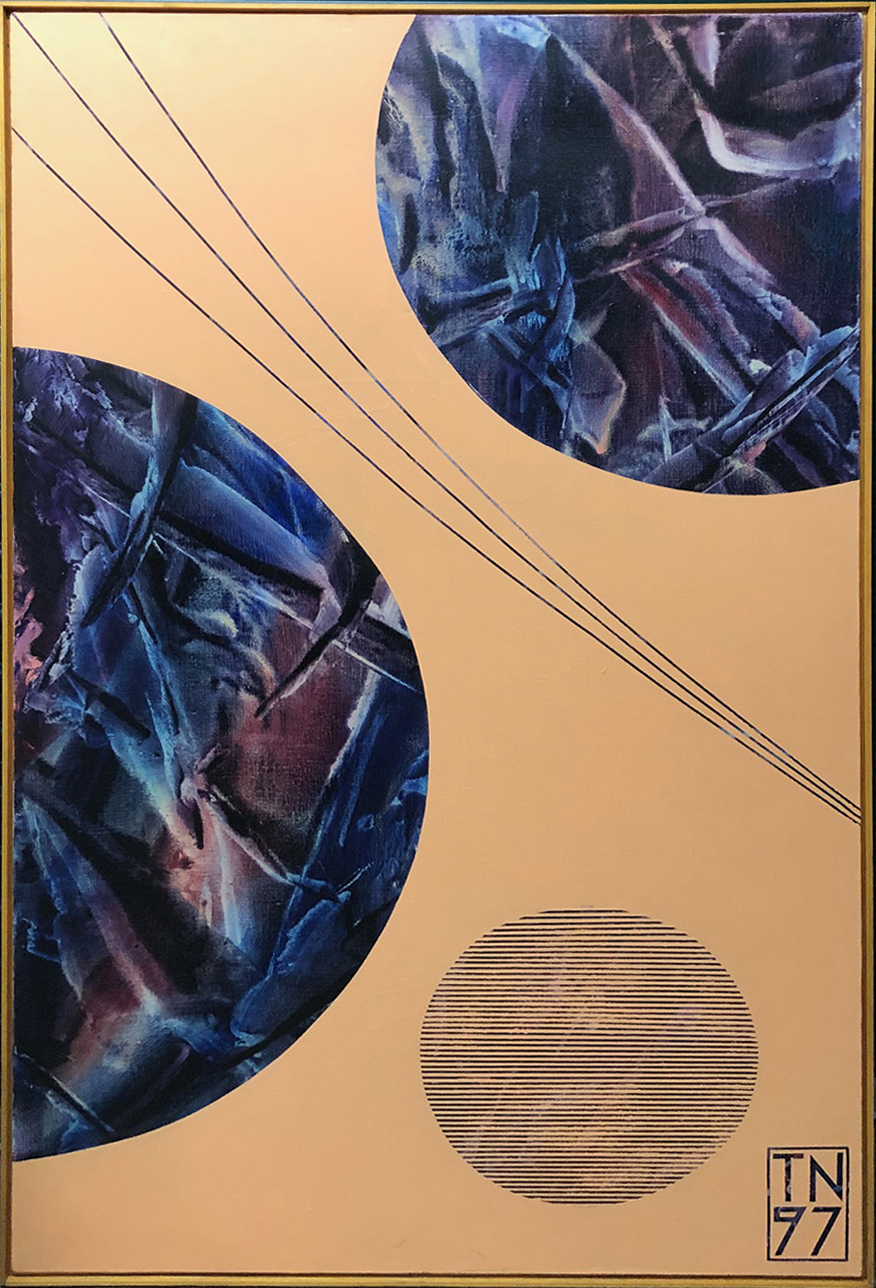 A classmate of Jackson Pollock at Manual Arts High School in Los Angeles, Harold Lehman (1913-2006) was among the school’s most gifted art students. He was only 19 when he joined the Bloc of Painters, led by Mexican muralist David Alfaro Siqueiros, and worked on Siqueiros’ controversial 1932 Olvera Street mural, Tropical America. After moving to New York City, Lehman again teamed up with Siqueiros in an experimental workshop where he, Pollock and others learned to use liquid paint and unconventional techniques. In 1937-38, under WPA auspices, he painted a major mural, Man’s Daily Bread, for the Riker’s Island Penitentiary mess hall.

The exhibition features paintings, drawings, and documentation of Lehman’s 1930s work—including a painting for which the model was a human skull borrowed from Pollock (now in the Pollock-Krasner studio)—lent by the artist's family, and detail studies for Man’s Daily Bread, from The Wolfsonian-Florida International University's Mitchell Wolfson, Jr. Collection.

Seeing Past the Future

An online exhibition of works by 2020 Pollock-Krasner Foundation grant recipients, "Seeing Past the Future" was conceived by  Shimon Attie,  the inaugural Charles C. Bergman Endowed Visiting Professor of Studio Art at Stony Brook University’s College of Arts and Sciences, in conjunction with the Pollock-Krasner House and Study Center. In consultation with Norman L. Kleeblatt, a former chief curator at the Jewish Museum in New York City, and with curatorial assistance from Talya Feldman, Mr. Attie has chosen a group of  29 artists who have received Pollock-Krasner Foundation grants since the onset of the COVID-19 pandemic. 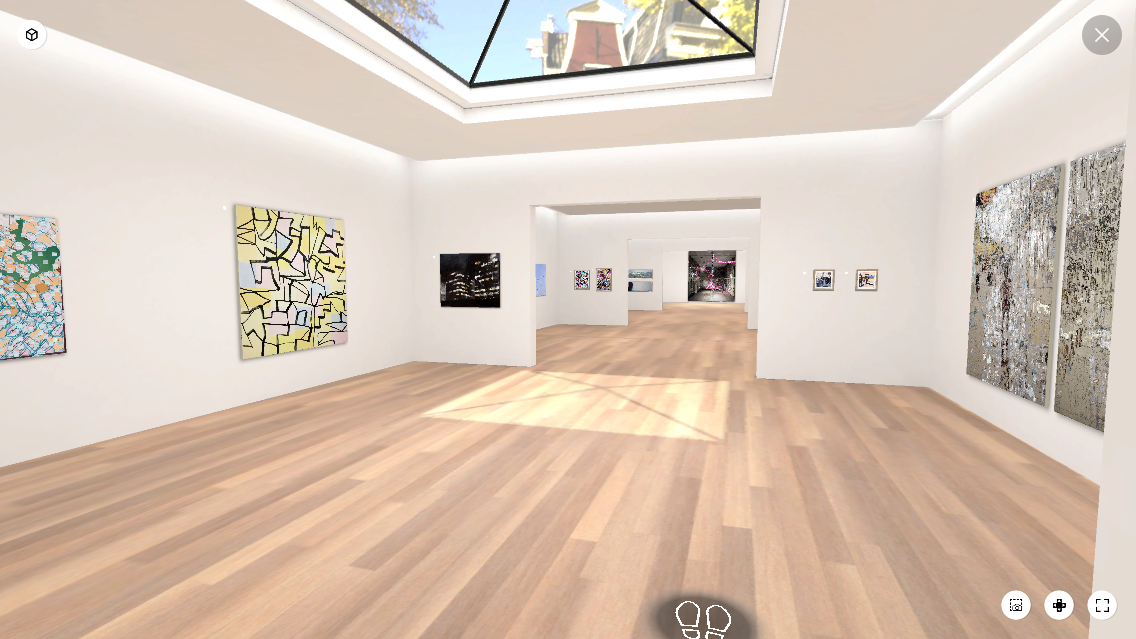 From the late 1930s through the end of his career, Pollock responded to many aspects of Picasso's oeuvre. The exhibition, a hybrid of actual works and replicas, traces those influences in key examples, including the Pollock-Krasner House and Study Center's Pollock painting, Untitled (Composition with Red Arc and Horses), ca. 1938, which contains a motif adapted from Picasso's 1937 mural, Guernica. A dedicated website with an essay by the distinguished scholar Pepe Karmel and a 3D tour of the installation, hosted by Artland, supplement the exhibition, which is supported by funds from the New York State Council on the Arts, the Singer Foundation, and a research grant from the Terra Foundation for American Art. 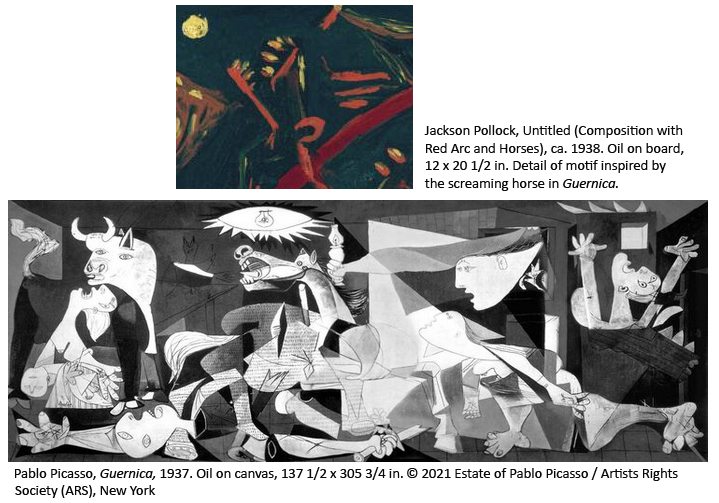