The drug discovery program includes tumor-specific drug delivery systems, “guided molecular missiles” in the fight against cancer. Despite the significant progress in the development of cancer detection, prevention, surgery and therapy, there is still no common cure for this disease. In addition, the long-standing problem of chemotherapy is the lack of tumor-specific treatments. Traditional chemotherapy relies on the premise that rapidly proliferating cancer cells are more likely to be killed by a cytotoxic agent. In reality, however, cytotoxic agents have very little or no specificity, which leads to systemic toxicity, causing undesirable severe side effects. Therefore, various “molecularly targeted cancer therapies” have been developed for use in specific cancers, including tumor-targeting drug delivery (TTDD). In general, a TTDD system consists of a tumor recognition moiety and a cytotoxic warhead connected through a “smart” linker to form a conjugate. When a multi-functionalized nanomaterial is used as the vehicle, a “Trojan Horse” approach becomes possible for mass delivery of cytotoxic warheads to maximize the efficacy. The Ojima Laboratory has been making an excellent progress in the novel molecular approaches to the design and discovery of “guided molecular missiles” for tumor-targeting chemotherapy.

One of the key problems with conventional chemotherapy is its toxicity: In addition to its beneficial characteristics of killing cancer cells, anticancer drugs also destroy healthy tissue resulting in systemic toxicity. Improvement in the potency and anti-MDR activities of anticancer drugs has provided efficient in treatment of aggressive and resistant tumors, although systemic toxicity persists and plays an important role in overall efficacy.

A Possible solution is Tumor-Targeting Drug Delivery which combines powerful anti-cancer compounds with tumor-targeting molecules. Paul Ehrlich (14 March 1854 – 20 August 1915) was a German scientist who won the 1908 Nobel Prize in Physiology or Medicine. He is noted for his work in hematology, immunology, and chemotherapy. Ehrlich predicted autoimmunity calling it "horror autotoxicus". He coined the term “chemotherapy" and popularized the concept of a “magic bullet". He is credited with the first empirical observation of the blood-brain barrier and the development of the first antibacterial drug in modern medicine.

ImmunoGen has developed technology known as “tumor-activiated prodrugs,” (TAPs), in which the anticancer agents are linked chemically to certain types of monoclonal antibodies. Those antibodies specifically bind to antigens that are known to be expressed predominantly on the cancer cell surface. The anit-cancer drug is inactive until it enters the tumor cell to which it is targeted to by the monoclonal antibody. In this way, the anticancer drugs are exclusively delivered to the cancer cells, leaving the normal cells intact. We have designed and synthesized novel taxanes used as cytotoxic agents in TAPs. Biological assays have since shown very impressive results. 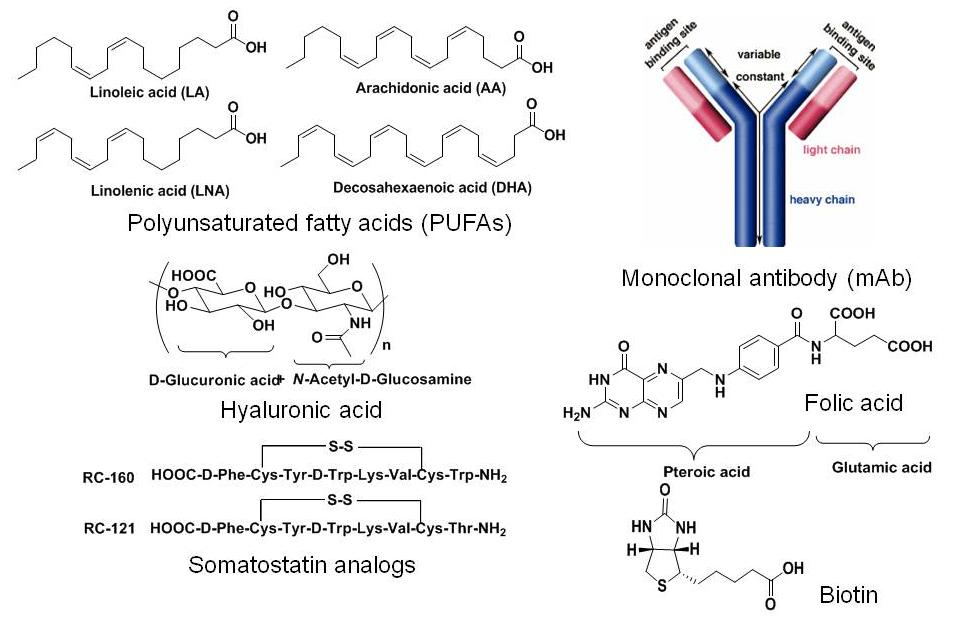 Ojima, I. "Use of fluorine in the medicinal chemistry and chemical biology of bioactive compounds—A case study on fluorinated taxane anticancer agents." Chem. Bio. Chem. 5, 628-635(2004).

Novel biotin-linker-taxoid conjugates were synthesized with strategically incorporated fluorine substituents to observe disulfide linker cleavage by 19F NMR. Ring substitution of fluorine on the linker and formulation with excipients significantly altered the rates of disulfide exchange and thiolactonization. BLT-S-F6, with improved solubility and heightened sensitivity, demonstrated strong stability in blood plasma, but readily cleaved and released the taxoid when exposed to glutathione levels found in the cytosol. 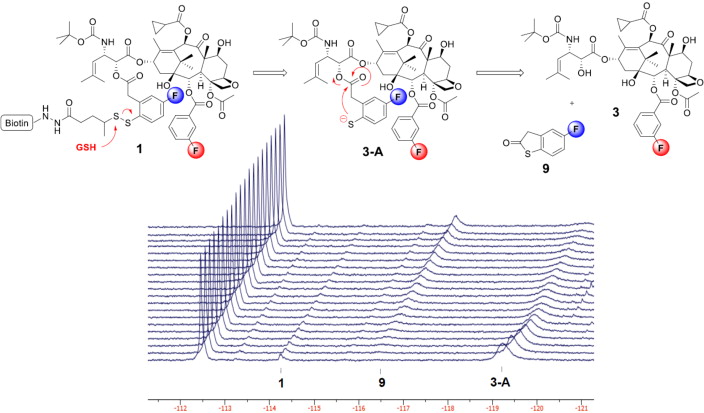 Time-resolved 19F NMR observation of thiolactonization of [2.5 mM] probe 1 in 30% DMSO in D2O beginning 1 hour after the addition of 6 equivalents of GSH at 25 °C at intervals of 15 min (128 scans/spectrum). This 19F NMR experiment disclosed that the "self-immolation" of the disulfide linker proceeded in two steps, generating the mechanistically anticipated thiolate 3-A as detectable transient species/intermediate, prior to thiolactonization to release a drug. It also suggests that the introduction of a fluorine para to a disulfide linkage had a profound effect on the rate of linker cleavage as well as thiolactonization. 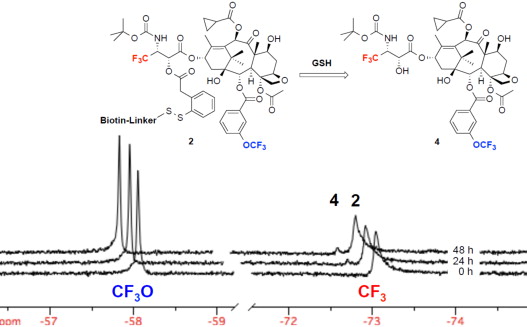 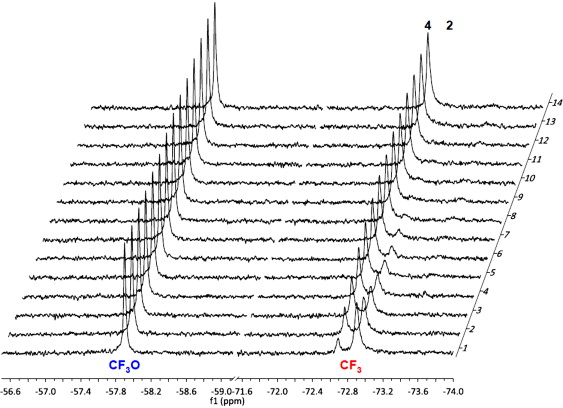 Left: 19F NMR spectral overlay of drug release of [200 μM] solution of BLT-S-F6 (2) in 86% blood plasma, 10% D2O, 2% ethanol, and 2% Tween 80 at 37 °C without supplemental GSH at 0, 24, and 48 h (1024 scans/spectrum). The result implies that the putative half-life of drug conjugates and TTDDSs using this self-immolative linker unit and taxoids as warheads in this formulation would be longer than one week in human blood plasma. Right: Time-resolved 19F NMR observation of drug release of [200 μM] BLT-S-F6 (2) in 86% blood plasma, 2% ethanol, and 2% Tween 80 in D2O 30 min after the addition of 100 equivalents of GSH at 37 °C at intervals of 1 h (1024 scans/spectrum). >98% of probe 2 disappeared and the corresponding amount of fluorotaxoid 4 appeared within 10 hour at 37 °C. The half-life of probe 2 with 100 equivalents of GSH in blood plasma was calculated to be ~3 h. This experiment allows us to estimate the half-life of this self-immolative disulfide linker in the cytosolic compartments following RME. 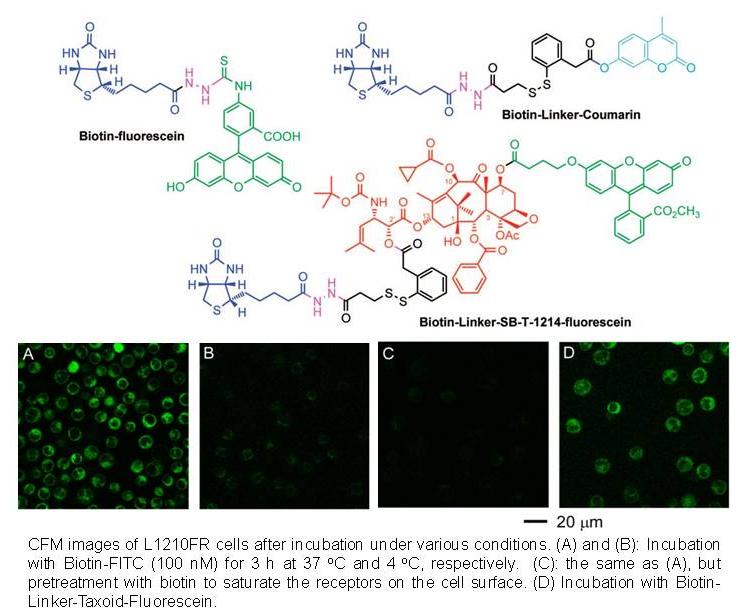 Recently, we have designed and synthesized novel tumor-targeting theranostic conjugates 1 and 2, which consist of biotin as the tumor-targeting module, SB-T-1214 as the cytotoxic agent, a selfimmolative disulfide linker for drug release, 1,3,5-triazine as the splitter module, ethylene glycol oligomers to increase aqueous solubility, and either a fluorine-labeled prosthetic in 1 for potential 18F-PET imaging in vivo or an FITC tether in 2 for internalization and drug-release studies in vitro. This TTDDS exhibited very high specificity to BR+ cancer cells. 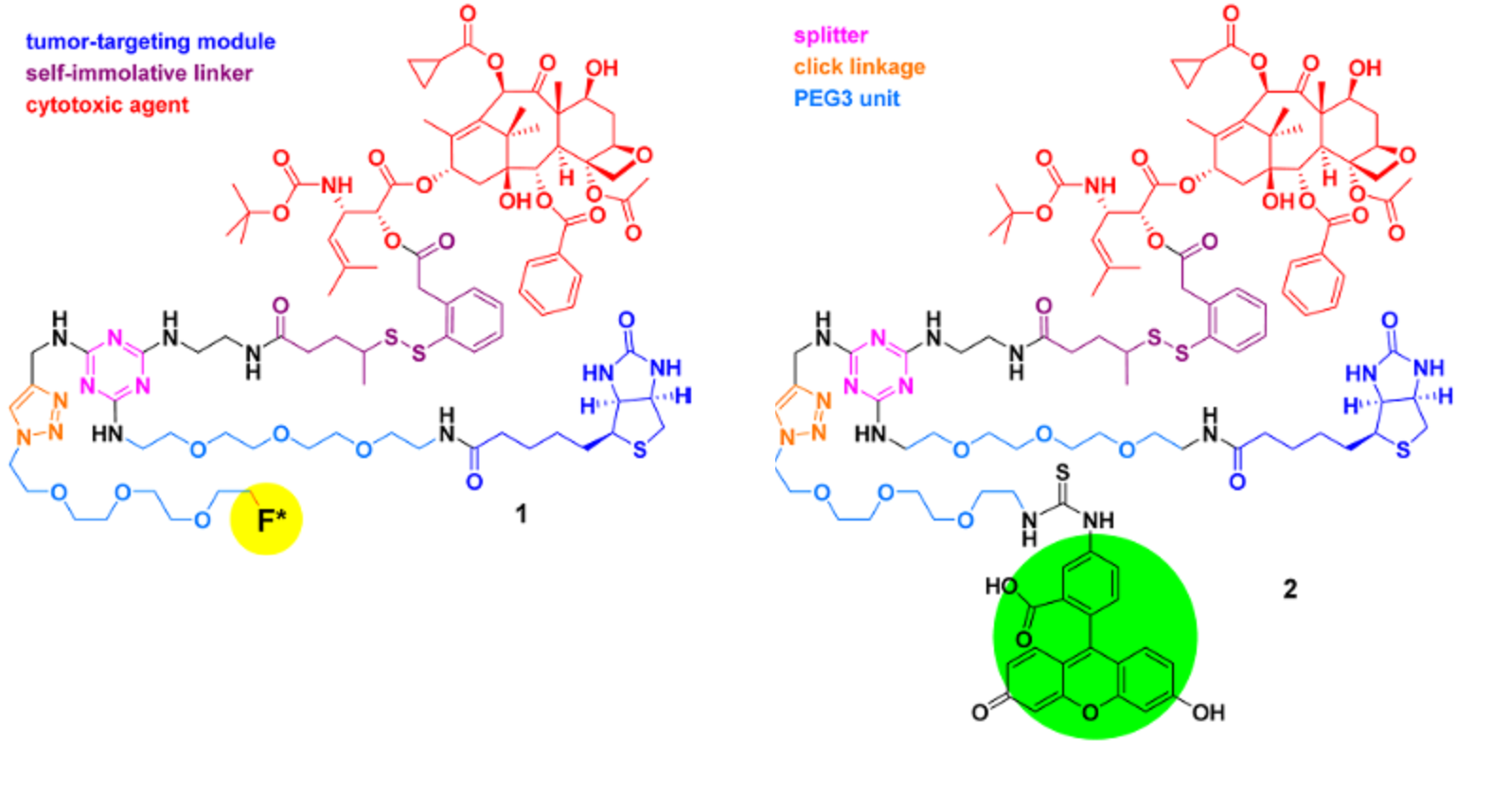 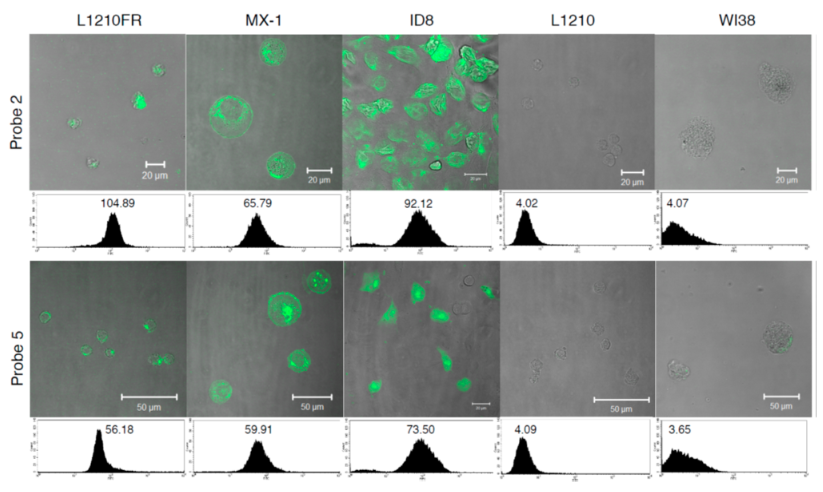 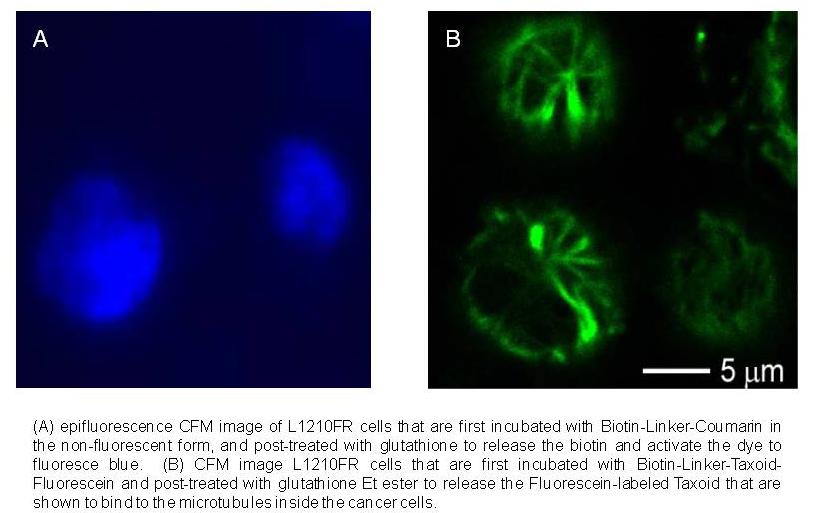 Internalization and Drug Release of Biotin-CNT-Linker-Taxoid-Fluorescein 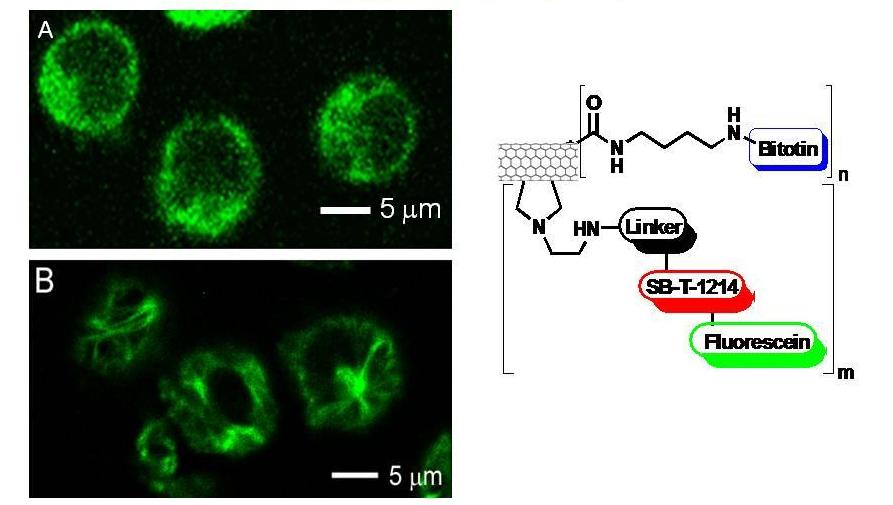 CFM images of L1210FR cells treated with biotin-CNT-taxoid-fluorescein incubated in the absence (A) and in the presence (B) of GSH Et ester. The latter shows the presence of a microtubule network, polymerized by taxoid, after the disulfide bonds had been cleaved by the GSH ethyl ester. 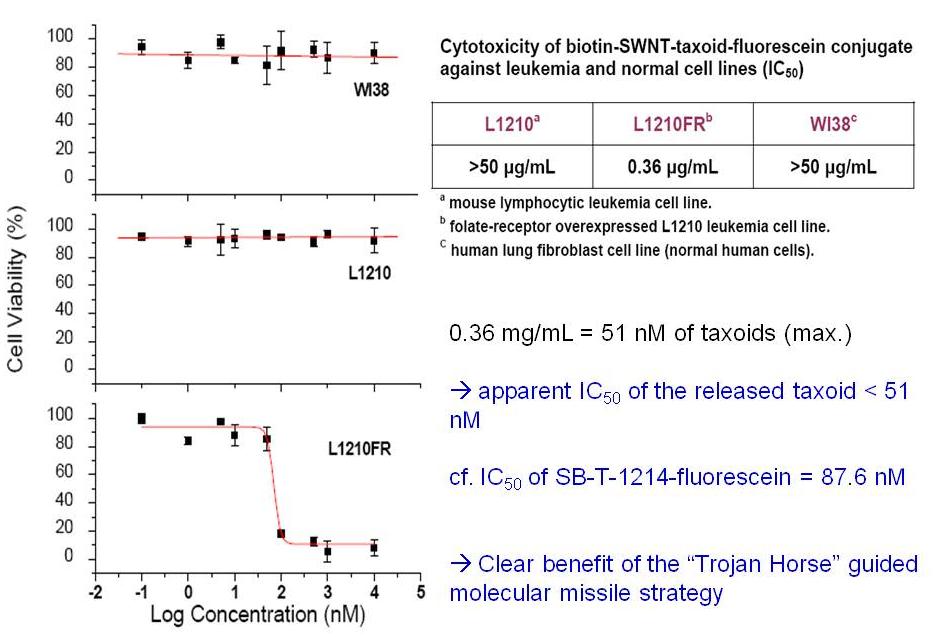 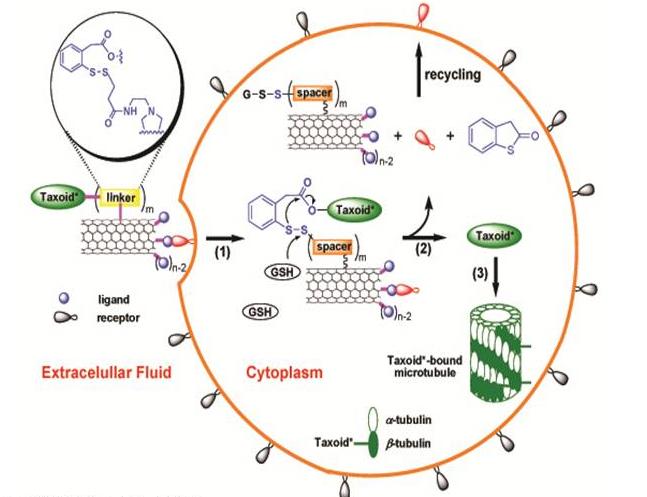 Dendrimer is a class of tree-like polymer with well-defined and shaped structure and good biocompatibility. It has been used as a macromolecular carrier to deliver anticancer drugs in tumor-targeted drug delivery. However, traditional dendrimer-based drug delivery systems directly decorate a dendrimer with different functionalities resulting in a mixture unable to be isolated to single pure components. To solve this problem, an advanced strategy is designed in Ojima Group by fully functionalizing different generations PAMAM dendrimer bearing cleavable cystamine core, followed by the cleavage of the fully functionalized dendrimers to generate two half dendrons. Then the two half dendrons could be re-coupled through a suitable linker to construct an ABTD versatile platform, which can be converted to a series of conjugates through an orthogonal click reaction. Each intermediate can be isolated as a single component with determined molecular weight. This ABTD system is a combination of active and passive targeting strategies. The tumor-targeting moiety (TTM) is recognized by its receptor overexpressed on the surface of cancer cells, and multiple TTMs can possess multi-binding effect to enhance the receptor-mediated endocytosis (RME) process for active targeting. Passive targeting replies on enhanced permeability and retention (EPR) effect which is typical for nano-sized particle. In general, this ABTD drug delivery system consists of sixteen polyethylene glycolylated (PEGylated) TTM on generation 3 half dendron, coupling through a PEGylated bis(maleicimido) linker to generation 1 half dendron with four PEGylated cytotoxic warheads each with/without a fluorescent probe and connected through a self-immolative smart disulfide linker. Excellent progress have been made to prove ABTD system is highly efficient for delivering anticancer drugs in tumor-targeted drug delivery. 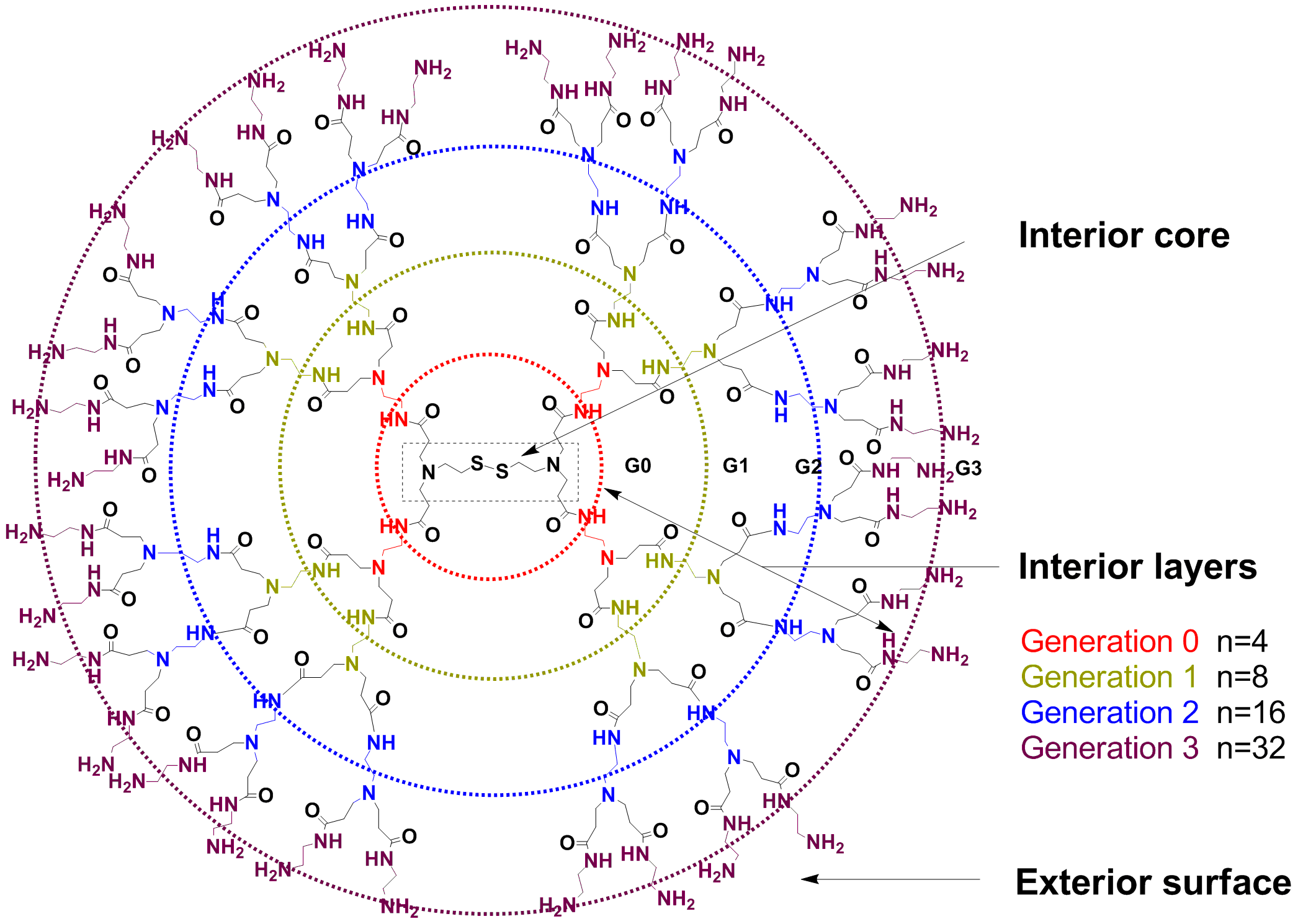 Architecture of PAMAM (poly(amidoamine)) Dendrimer with Cleavable Cystamine Core: PAMAM (poly(amidoamine)) dendrimer has well-defined structure. Its tree-like molecular architecture can be divided to an interior core, interior layers (also called "generations") which consists of repeating units regularly attached to the core, and an exterior surface of functional terminal groups attached to the outermost generation. Generation number (usually abbreviated to G#) is determined by the number of focal points going from the core towards the surface. The molecular weight of dendrimer itself and the number of terminal functional group can be easily determined by the generation. Especially the dendrier with a cleavable cystamine core (disulfide linkage) can be homo-cleaved to form two half dendrons with sulfhydryl functional group.

Synthetic Strategy for Construction of Asymmetric Bow-Tie Dendrimer (ABTD) Platform: Instead of attaching different functionalities on one dendrimer molecule resulting in a mixture, in Ojima group we developed the synthetic strategy to generate dendrimer-based conjugate as determined and repeatable single component macromolecule. Different generations of dendrimer bearing cleavable core are fully functionalized by one type but different functionality, and cleaved to form half dendrons, followed by re-coupled through a suitable linker to construct a dendrimer-based platform. And we have developed purification method for isolating each macromolecular intermediate as single component with good purity. 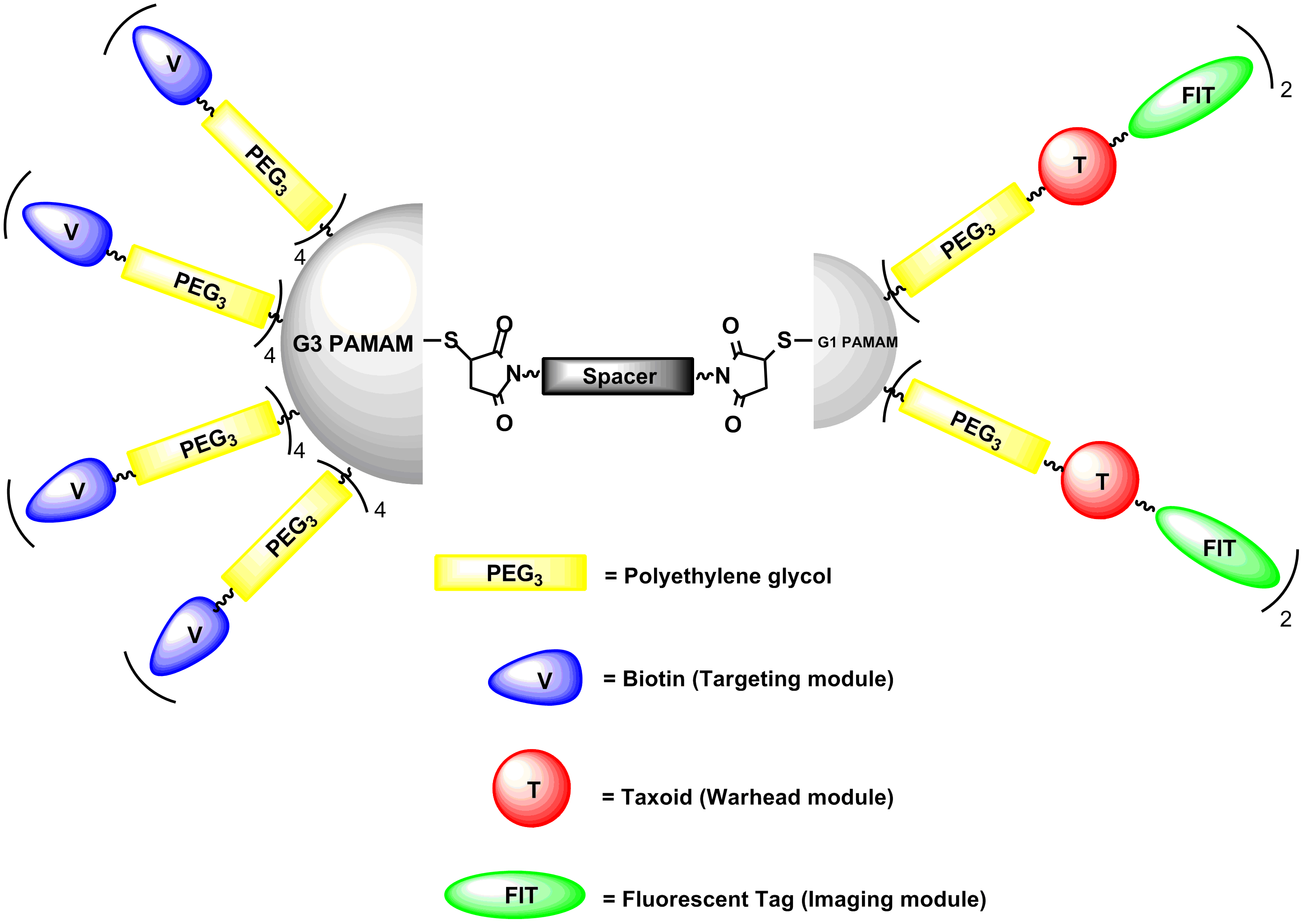