Paclitaxel and docetaxel have developed into two of the most widely used agents for cancer chemotherapy, with combined sales of roughly 2.8 billion dollars in 2006, however, their lack of tumor-specificity frequently causes the patient to suffer from serious and dangerous side effects. Although they are effective against numerous cancers (e.g. breast, ovary and lung cancers), these usually potent compounds often show little to no efficacy when used to treat melanoma, pancreatic and renal cancers. Resistance to taxane is possible through three different mechanisms: overexpression pf P-gp, mutation in β tubulin binding site and overexpression of the highly dynamic βIII-tubulin isotype.

New-generation taxoids with modifications at position C10 and C13 such as SB-T-1214 can overcome drug resistance caused by those reasons. Furthermore, introduction of a substituent (e.g., MeO, N3, Cl, F, etc.) to the meta position of the C2-benzoyl group of the second-generation taxoids enhanced the activities 2-3 orders of magnitude higher than the parent drugs against drug-resistant human breast cancer cell lines. SB-T-1214 exhibited excellent activity against paclitaxel-resistant ovarian cancer cell lines with mutations in β-tubulin as well, wherein the drug resistance is mediated by the β-tubulin mutation. These taxoids were found to possess exceptional activity in promoting tubulin assembly, forming numerous very short microtubules similar to those formed by discodermolide. Besides, SB-T-1214 exhibited high efficiency against colon cancer in vivo, inducing complete regression of drug-resistant colon tumor xenografts in all surviving mice with tumor growth delay up to 201 days. Such promising antitumor activity of SB-T-1214 led us to suggest that this compound can specifically target tumor-specific CSCs by inhibiting some stemness-related signaling pathways and/or promoting their differentiation.

In collaboration with Dr. Galina Botchkina, we have isolated CSCs from various colon cancer cell lines, induced 3-dimensional CSC spheroids and treated these spheriods with SB-T-1214. Treatment of SB-T-1214 led to a nearly-complete inhibition of the stem cell-related genes and significant down-regulation of the pluripotency gene expression in HCT-116, DLD-1 and HT-29 colon CSCs.

β-Lactam Synthon Method for the Synthesis of Taxoids

In 1992, the Ojima group reported the highly efficient semisynthesis of paclitaxel utilizing the beta-lactam synthon method. Coupling of enantiopure beta-lactams to properly derivatized baccatin scaffolds via the Ojima-Holton coupling protocol has allowed the facile synthesis of paclitaxel analogues. Over the past twenty years, our lab has produced a large number of next-generation taxoids, which exhibit marked improvement in cytotoxicity against both drug-sensitive and drug-resistant cancer cell lines.

Use of New Generation Taxoids as Warheads

Compare to Paclitaxel and Docetaxel, these new-generation taxoids are 100 times more potent against to P-gp overexpression cells. The new-generation taxoids are also tested in paclitaxel resistant cell lines whose paclitaxel binding site have mutated. Those paclitaxel resistant cell lines are sensitive to all of them.  Besides of cytotoxicity, the new generation of taxoids are extremely effective in increasing the rate of microtubule assembly. While βIII-tubulin transfected HeLa cells have a resistance index of 11 against paclitaxel, the resistance index is decreased to 2.5 for SB-T-1102 and to 5.3 for SB-T-1214. Some biological result are listed below. 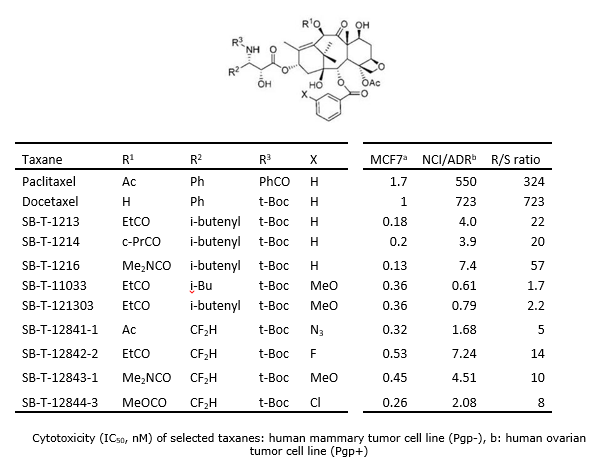 Taxoids are potent antitumor agents which stabilize microtubule polymerization and inhibit the disassembly of the mitotic spindle, stopping chromosome segregation and arresting mitosis in the G2/M phase.These new-generation taxoids interact with microtubules in a manner different from that of paclitaxel and docetaxel.As the figure below shows, GTP and paclitaxel form long and straight microtubules. The microtubules formed with new-generation taxoids are numerous and very short microtubules, in a manner similar to those formed by discodermolide, the most potent naturally occurring microtubule-stabilizing agent. 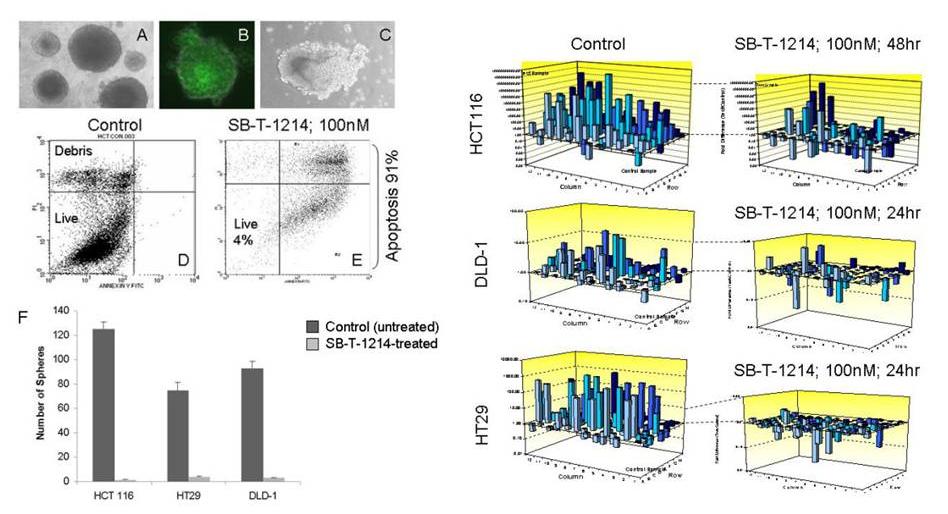 As seen from the figure above, relatively low concentrations of SB-T-1214 (100 nM-1 μM for 24 or 48 hr) induced dramatic down-regulation of stemness in the majority of stem cell-related genes in all three types of colon cancer cells. It is worthy to note that many of these genes were related to the stem cells self-renewal, regulation of symmetric/asymmetric division and pluripotency. For the efficacy displayed in both bulk and CSC-enriched cells, SB-T-1214 was used as drug warheads for our tumor-targeting drug conjugates.

Combination chemotherapy involves the sequential delivery of two or more cytotoxic agents based on non-overlapping toxicities and mechanisms of action to augment therapeutic efficacy. Combination chemotherapy decrease in systemic toxicity and increase in efficacy due to synergistic or cooperative effects of the drugs.  The combination of CMC2.24 and taxoids are tested against prostate cancer cell line. The result indicated that combination of taxoid and CMC2.24 are more potent than single agent. 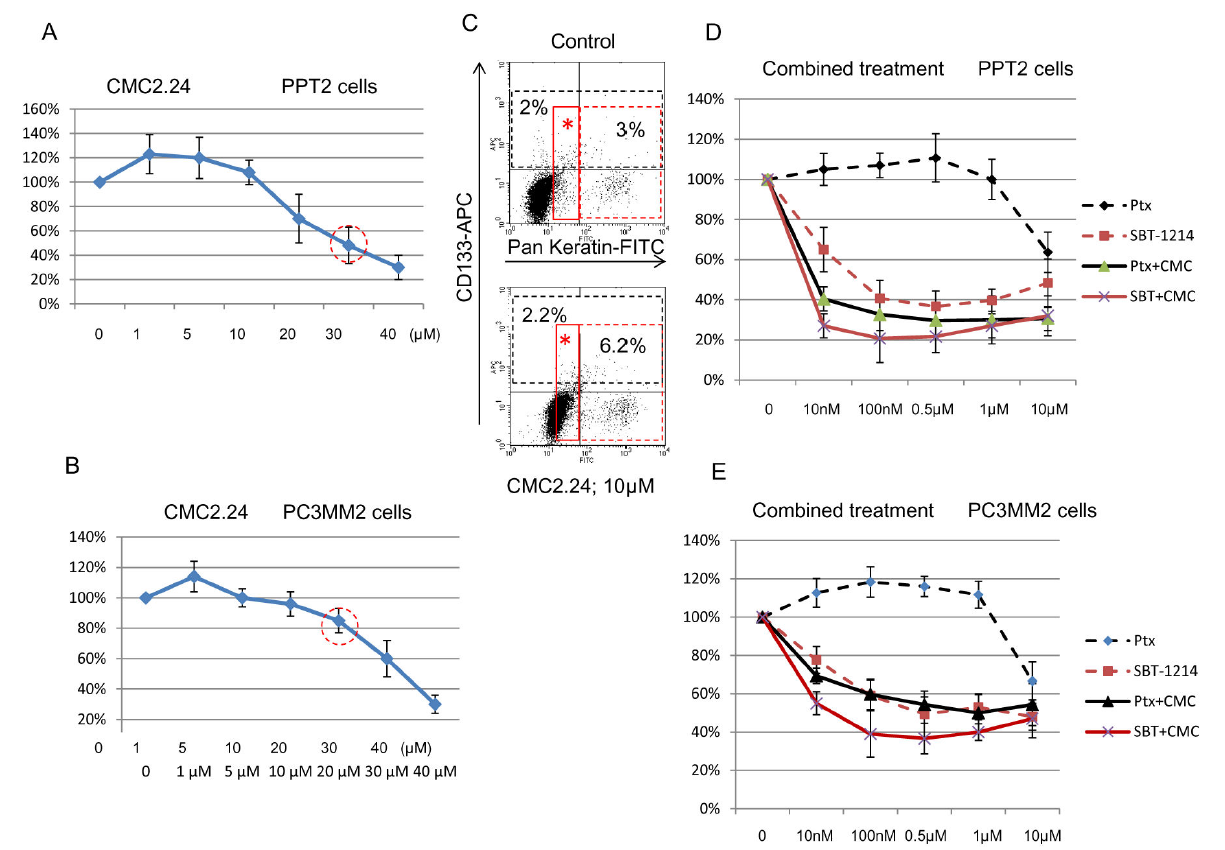 As seen from figure above, lower concentrations of CMC2.24 promoted cancer cell proliferation, while higher ones were cytotoxic. (C) indicated that low concentrations of CMC2.24 increased proliferation of the non-stem progenitors rather than CSCs. A combination of the two agents induced more significant cell death of the CD133+ PPT2 and PC3MM2 cells compared to each compound as a single agent.