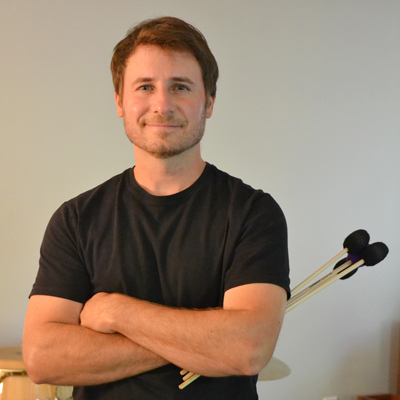 Thomas Marceau is currently the director of percussion studies at Suffolk Community College, director of the Young Artists Percussion Ensemble at Stony Brook University, adjunct professor of percussion at Five Towns College, and director of bands at Mt. Sinai High School. Dr. Marceau is a member of the Education Committee for the Percussive Arts Society, Vice President for the PAS New York Chapter, and a chairperson for the SCMEA Day of Percussion.

Tom has been on the music faculty at Finger Lakes Community College, NEMC, and was the graduate teaching assistant for Gordon Stout at Ithaca College.  He holds degrees from Stony Brook University (DMA), Ithaca College (MM), and the Crane School of Music (BM).   Tom is a proud endorser of Malletech instruments and mallets.

As a commissioned composer, his works are included on collegiate and competition repertoire lists around the world. Most recently, his music was added to the Great Plains International Marimba Competition’s repertoire list, the Southern California Marimba Competition’s repertoire list, New York State's NYSSMA manual for contest solos, and the Indiana State School Music Association Percussion Manual.  His works have been premiered in Europe, Japan, and throughout the United States. Marceau’s compositions have been described in the Percussive Arts Society as "Beautifully Stunning" - T. Adam Blackstock, "graceful, pretty, and expressive" - Brian Zator, and Eric Willie writes, “Marceau has provided a great addition to marimba repertory, blending powerful musicality with a great display of idiomatic writing.” He is a published through HoneyRock Publishing and Tapspace.

Tom is an active performer and clinician, giving performances and master classes throughout the East Coast. This past year he gave the New York premier of Keiko Abe’s, The Song of Trees, at the NYC Day of Percussion, served as a guest artist and performer at the Heartland Marimba Festival, and   as a member of the Percussion Alchemy Duo, premiered Adam Silverman’s, Rule of Five for Percussion Duo and Wind Ensemble.  Tom’s first solo album for marimba, Moments, was released in 2015 through HoneyRock Publishing.