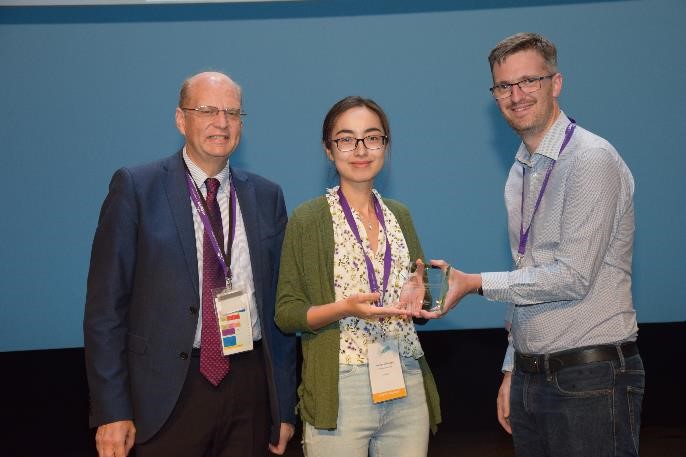 Tuerxun (Ellie) Ailihumaer recently won the Best Student Contribution Award at the 12th European Conference on Silicon Carbide and Related Materials (ECSCRM 2018 -  https://warwick.ac.uk/fac/sci/eng/ecscrm2018/) which was held at the International Conference Center in Birmingham, UK. Her paper, which was an oral presentation, was entitled "Validation of X-ray topographic contour mapping method for measuring nitrogen doping concentrations in N-doped 4H-SiC substrates". She was given a specially engraved plaque  and a prize of $250 pounds. In the photo attached, Ellie is receiving the award from Prof. Phil Mawby and Dr. Peter Gammon of Warwick University (UK) who were the lead organizers of the conference.

She is currently a first year Ph.D student in professor Dudley's Crystal Growth and Synchrotron X-ray Topography research group . She is Uyghur. She was born in Urumqi, the capital of Xinjiang Uyghur Autonomous Region in China. She received her bachelors degree from Changchun University of Science and Technology in China .Then she came to Stony Brook University and started her masters program in material science in 2016. She recently completed her master's degree in the summer of 2018.

Out of some 620 conference delegates, 98 were students so competition was very stiff.

ECSCRM is a biannual scientific event that explores, presents and discusses the new achievements in the field of wide-bandgap semiconductors focusing on silicon carbide. It is an international gathering of scientists and engineers who are active in the research and technology of this field and serves as a platform for exchanging ideas on recent scientific and technical developments between the industrial, academic and public sectors.

ECSCRM addresses advances in both basic research, as well as technology of this scientific field. For the former, the aim of the conference is to discuss the latest progress in basic research issues such as theoretical and experimental investigations of crystal growth, characterization and control of material properties, as well as other research issues of silicon carbide and related materials. For the latter, the ambition of the conference is to debate new research results relevant to wafer production processes, device fabrication technologies and device applications and to analyze their impact on the goals of the industry towards the development and commercialization of advanced devices and circuits for energy saving, high voltage switching, high frequency, high power and high temperature applications.

The very first ECSCRM took place in Fodele-Heraklion, on the beautiful island of Crete, Greece in 1996.

Following a successful course of almost two decades, the conference has gained momentum, acquired significant prestige among professionals and traveled all over Europe. The 12th ECSCRM will take place in the dynamic and vibrant city of Birmingham, located at the heart of the United Kingdom.