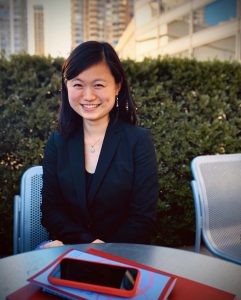 The following was written by Stony Brook School of Journalism alumna Taylor Ha ’18. Taylor is currently a staff writer for the Marketing and Communications Department at Fordham University.

When I accepted my first full-time job, I felt like I had betrayed my original dream. I’d graduated as the co-valedictorian of Stony Brook University’s School of Journalism, but I wasn’t about to begin a nationally renowned fellowship, nor a job as a local reporter for a newspaper. Instead, I would become a staff writer for the Marketing and Communications Department at Fordham University.

After I graduated and moved back into my childhood home, I applied to more than 100 entry-level jobs. I never heard back from most of them. In July, I landed an interview at Forbes’ Jersey City office. Two editors were looking for a reporter in diversity and inclusion, and they were impressed by my senior capstone project on the lack of teacher diversity on Long Island. But there was another job that had caught my eye. It was the job at Fordham. The school was looking for someone with strong writing skills, good news judgment, experience with SLR cameras, a commitment to accuracy and the ability to meet deadlines. The job required weekly travel between Manhattan and the Bronx, but I was thrilled. (I prefer public transportation to driving because the latter makes me anxious.) If I hadn’t known any better, I would’ve thought the job application at Fordham was for any newsroom I’d visited on a Professional Fridays trip.

Ten days after I applied, a Fordham editor emailed me and asked if I could come in for an interview. And ten days after that, I was officially hired.

I took the job for several reasons. I was wooed by the starting salary, $65,000 — much more than I had expected as a recent college graduate in the writing field. I was relieved that I wouldn’t have to drive around unfamiliar towns and cities, like a traditional reporter does. But most of all, I was happy I could continue doing what I love most: telling people’s stories with a pen, notebook and camera, as I had done for the past four years.

Since August 2018, I’ve told more than 160 stories. I’ve spoken with a silver-haired rabbi and a young Palestinian activist who share an unlikely friendship. I met the first living Iraq War veteran to receive the national Medal of Honor. I’ve penned obituaries for a Fordham freshman who passed away after a severe asthma attack and a man who mentored Pulitzer Prize-winning journalists. More recently, I independently shot and produced a video profile on an Irish step dancer, which won a university-wide award, and moderated a Q&A on achieving antiracism at Fordham. I’ve accomplished more than I thought I could ever achieve as a writer for a private university.

Being a reporter for a newspaper or TV station is wonderful and rewarding. But time has taught me that you can find that joy at other places, too. There are hundreds of opportunities outside traditional newsrooms. (FYI: If you work at a university, you can earn a tuition-free master’s degree from your employer, the way I did.)

Two summers ago, Forbes turned me down. Now I think of it as a blessing in disguise. I still interview people, document their stories, and share them with the world. It’s a smaller world, but a vibrant world nonetheless.