Al-Gharbi to join SoCJ, Alda Center as assistant professor of communication and journalism 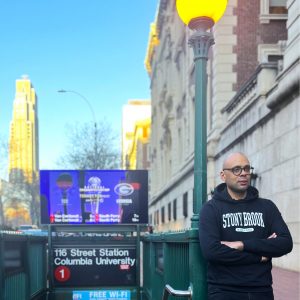 Al-Gharbi’s work focuses on the political economy of knowledge production, with a particular focus on higher education and news media institutions, and the societal impact of academic and journalistic outputs. His research has resulted in nine peer-reviewed publications and a forthcoming book from Princeton University Press. His work has also been cited by a variety of government agencies and organizations, including the Department of State, the Council on Foreign Relations, and the Army War College. Al-Gharbi has been a columnist in some of the world’s leading publications, including The Guardian, Al-Jazeera America and Salon. He is a frequent contributor to media outlets including the New York Times, the Washington Post, The Atlantic, The Nation and New Republic. He has been relied on as a subject matter expert in stories for the Wall Street Journal, NPR, USA Today, Voice of America and many other outlets. His work frequently goes viral on social media.

“Musa brings an incredible record of scholarship to Stony Brook. More importantly, he brings a deep and thoughtful curiosity to the ways information flows, is consumed, and impacts individuals and society,” said Laura Lindenfeld, dean of the SoCJ and executive director of the Alda Center for Communicating Science. “His commitment to asking, and answering, critically important questions and ensuring that the answers to those questions make a real impact through practical applications fits perfectly with our mission of using ethical, engaging communication to create a more fair, more just and more rational world. I am delighted to welcome him to our school and our university.”

Al-Gharbi holds degrees from Cochise College, the University of Arizona and Columbia University. He is completing his Ph.D. in sociology at Columbia.

Al-Gharbi’s work explores race, inequality, moral and religious tensions, global politics and extremism. He has been published in journals including the International Journal of Communication, Critical Studies on Terrorism, and the Journal of Computational Social Science. His book will be titled “We Have Never Been Woke: Social Justice Discourse, Inequality and the Rise of a New Elite.”

His teaching experience includes courses in sociology, philosophy, and political science at a variety of institutions, including Columbia, Johns Hopkins, and the University of Arizona. Al-Gharbi is an advocate for his students inside and outside the classroom, helping them to secure internships and jobs, as well as to publish their work in a variety of professional media outlets.