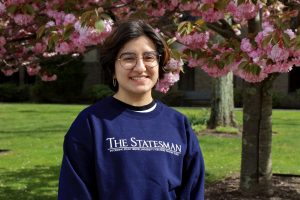 Niki Nassiri cares deeply about the stories children hear and tell about themselves. Growing up in largely white, suburban America, Nassiri noticed and was bothered by the one-dimensional portraits she often saw of her native Iran. She became a journalism major at Stony Brook to help diversify, and deepen, the stories we tell about ourselves and each other.

After graduating in May, Nassiri will travel to Taiwan as an English Teaching Assistant as part of the Fulbright Scholars program.

“Growing up in the U.S., people saw Iran as an object of fear, and not the culture of love I had grown up with,” Nassiri said. “The half-truths on TV motivated me to major in journalism, not only to rewrite the wrongs I grew up with, but to build a more empathic world through storytelling.”

She chose to apply for a Fulbright experience in Taiwan, a melting pot of 16 indigenous groups, Minnanese, Hakkas, Hoklas, mainlanders, immigrants and expatriates.

“I want to help students embrace their own backgrounds while also nurturing curiosity for the world with English,” she said. “Most of all, I never want another child to grow up feeling like an object more than they are a person ever again.”

Nassiri is the second student in the history of Stony Brook’s School of Communication and Journalism to receive a Fulbright award.

“We are delighted and proud that Niki has won this Fulbright Award,” said Laura Lindenfeld, dean of the SoCJ and executive director of the Alan Alda Center for Communicating Science. “Storytelling is how people make sense of the world around them and understand how they fit into society, and I applaud Niki for her commitment to using stories to help children understand themselves and each other as they explore this complex, multifaceted world.”

One of the defining moments of Nassiri’s time at Stony Brook was an animation production intern at Sesame Workshop. There, she helped create scripts and animation designs, and worked with the young actors who voiced the characters on a new children’s series, Bea’s Block. In all she did, Nassiri tried to make story lines authentic and inclusive, ensuring that there was room for characters’ experiences to reflect the ways their different identities — ethnic, racial, cultural, gender and more — intersect.

“Moments on that set filled me with warmth and drove me to pursue this path so that every kid can know a character that reminds them of themselves,” she said. “My goal is to become a cartoon producer who oversees scripts and character/scene design to ensure that there are shows inviting complexity, intersectionality and diversity into all stories.”

Nassiri also completed an internship at the American Civil Liberties Union, served as news editor of The Statesman, and worked in the Stony Brook Student Engagement and Activities Office on branding and marketing. She was a founding member and has continued to play an important role in the Building a Better SoCJ Workshop, which aims to make the School more inclusive and to support future journalists as they prepare to cover racism and other traumatic issues.

“Niki is the best of U.S. youth: warm, engaging, accepting, intelligent, good-humored and kind,” said Barbara Selvin, journalism associate professor. “She’s already bubbling with ideas for the classroom and community and, once she arrives in Taiwan, she will, I am certain, add new elements to her plans based on what she sees and learns. Her own joy and creativity will inspire the students with whom she works. She will be an outstanding representative of the United States abroad.”