On the evening of September 26 th, the Stony Brook Computer Science Department organized a local Association for Computing Machinery (ACM)-style Coding Contest. Each participant competed on their own and were given seven algorithmic problems to solve within three hours. The goal of the event was to identify the top candidates for the ACM International Collegiate Programming Contest (ICPC) teams, which will participate in the Greater New York Regional Contest for a slot in the ACM World Finals 2019 to be held March 31 – April 5 at the University of Porto, Portugal.

Sponsored by Google, there was swag and pizzas for all participants, and prizes for the top finisher in each of the three categories:

Organizer and Programming Team Coach Professor Rezaul Chowdhury from the Computer Science Department and the Institute for Advanced Computational Science has run the event for SBU for the last 4 years. “I was happy to see a good mix of MS, PhD, and undergraduate students from multiple departments in the top 10 this year. We will keep working to increase participation from departments other than computer science in the future,” said Prof. Chowdhury. The baton for running the event was passed on to him in 2015 from Professor Steven Skiena, who had been responsible for organizing the contest since 2002.

For this year’s event, approximately 65 SBU students participated. Each solution submitted by the contestants was given a limited time (1-4 seconds) and limited memory to complete running correctly on all test cases. Correct but inefficient solutions (that did not complete running within the given time and memory limits) were not accepted. Then the contest platform (HackerRank) automatically ran each submission on the dataset that had been created for the corresponding problem and determined correctness by comparing the output generated by that submission with the expected output for each test case. It also checked for efficiency (memory and time limits). Penalties in minutes were given for incorrect and/or inefficient submissions as well as the time taken to solve the submissions. (See the official results below.) 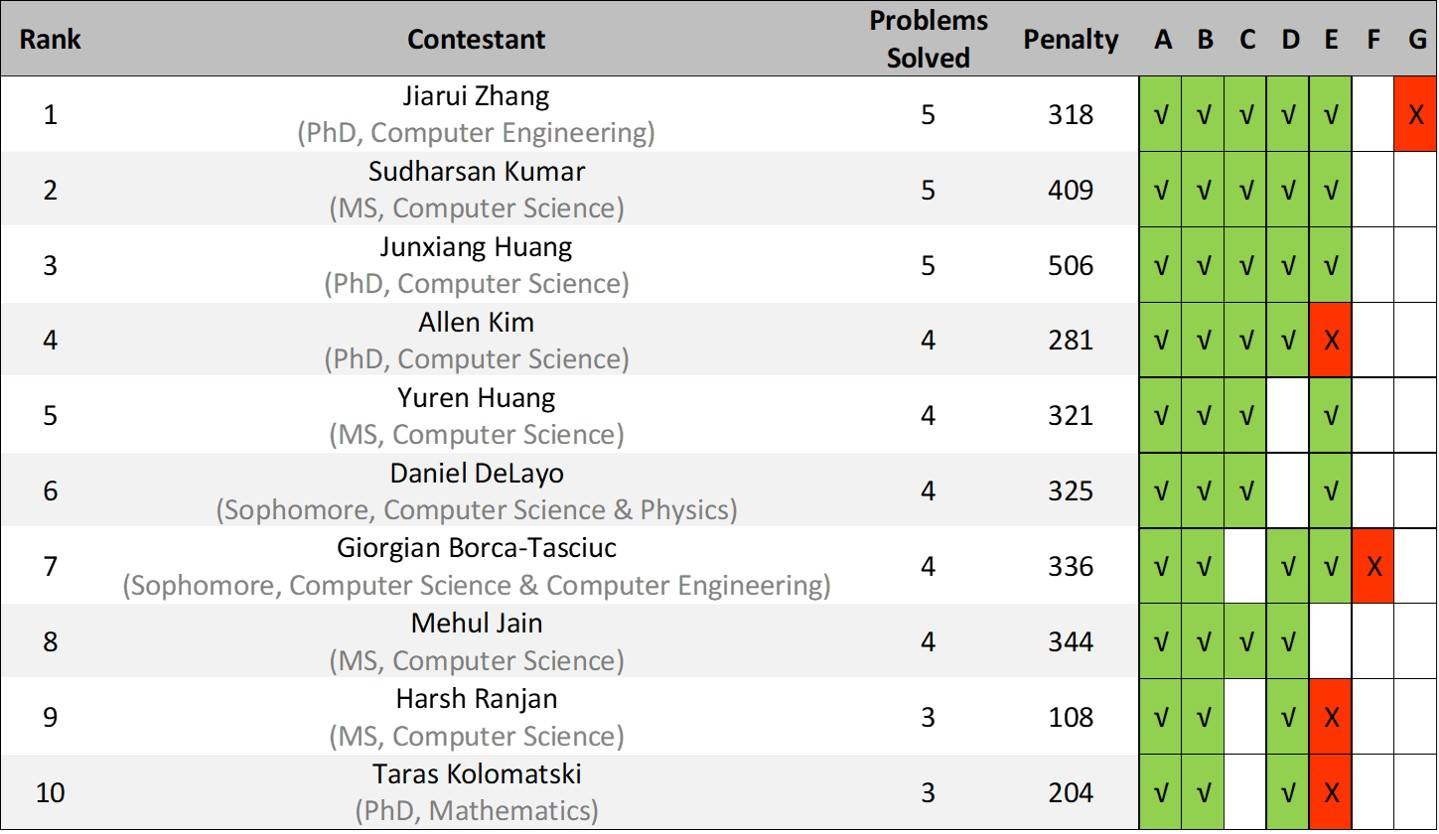 Of the top ten finishers, only nine will move on to the next stage of the competition. From these nine, three 3-person teams will be created and trained, and will continually practice (with the help of co-coaches Haochen Chen and Zafar Ahmad) until they compete in the regional contest, which is an all-day competition held on November 18 at Manhattan College Department of Computer Science in the Bronx. From the regional contest, only one or two teams move to the international finals.

This year's problem set (sorted from easiest to hardest):
http://www3.cs.stonybrook.edu/~rezaul/SBU-Local/probs/problemset-2018.pdf

Solutions and judges' data will be posted to the Competitive Programming Google Group:
https://groups.google.com/a/cs.stonybrook.edu/d/forum/competitive-programming

Acknowledgments for this year’s contest:

History on past competitions: