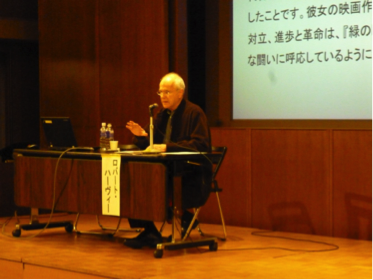 Robert Harvey received a President’s Distinguished Travel Award for his keynote lectures in Tokyo in March.

Michelle Ho received a 2016-2017 Japanese Studies Fellowship from the Japan Foundation to conduct long-term fieldwork for her dissertation. At Stony Brook University, she was awarded the President’s Award for Excellence in Teaching by a Graduate Student. Additionally, she was awarded the Graduate Student Organization Distinguished Travel Award to present at the Asian Studies Conference Japan in Tokyo.

Timothy K. August received an AHLSS (Arts, Humanities & Lettered Social Sciences) Graduate Fellowship & Faculty Research Award for 2016-2017 and a FAHSS (Faculty of Arts, Humanities, and Social Sciences) award to travel to the Wing Luke Museum of the Asian Pacific American Experience as well as the Orange County and Southeast Asian American Archive. The results of this research will appear in his book manuscript, The Refugee Aesthetic: Relocating Southeast Asian America. Also he was awarded a President’s Distinguished Travel Award to travel to Miami, Florida to present at the Association for Asian American Studies annual conference.

Greg Clinton received a 2016 Travel to Collection Award from the Lemelson Center for the Study of Invention and Innovation at the Smithsonian.

Izabela Kalinowska was the recipient of a FAHSS (Faculty of Arts, Humanities, and Social Sciences) award for her project on “Documenting Ukraine in Visual Media.” Additionally, she was awarded a President’s Distinguished Travel Award to travel to Lviv, Ukraine, to present at the ASEEES-MAG Summer Convention.

The Language Learning Research Center (LLRC), directed by Andrea Fedi, was awarded a federal STARTALK grant of $89,000 to offer less-commonly taught languages at Stony Brook. This grant allowed the LLRC to offer Arabic, Turkish and Korean courses during the Summer of 2016.

Dylan Godwin (ABD) received the 2015 President’s Award for Excellence in Teaching by a Graduate Student.

Beth Tsai (ABD) was selected to give a lecture entitled “Tsai Ming-liang at the Museum: Cinephilia, the French Connection, and Cinema in the Gallery” in Spring 2015 as part of the prestigious Provost’s Graduate Student Lecture Series.

Sofia Varino and Claire Yu (both ABD) won GSO Distinguished Travel Awards to support Varino’s travel to the “Approaching Posthumanism and the Posthuman” Conference and Doctoral Workshop at the University of Geneva in June 2015 and Yu’s travel to the Fourth Asian Conference on Film & Documentary in Kobe, Japan in November 2015, where she will present a paper entitled “The Way We Were: Documenting Taiwan in Qiong Yao’s Romantic Melodrama.