Largest Gift to Cody Center since its inception is matched for $1.57 million total impact 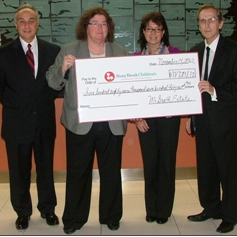 STONY BROOK, N.Y., January 7, 2013 – The estate of the late Phillip and Carolyn McGrath of Port Jefferson, NY, has bequeathed $787,712 to Stony Brook Children’s Hospital and The Cody Center for Autism and Developmental Disabilities. Through the couple’s bequest, Stony Brook Children’s and The Cody Center will each receive $393,856, for a total contribution of $787,712. The couple’s gifts are being matched, respectively, by The Simons Foundation and an anonymous donor, for a total of $1.57 million; it is the largest gift to The Cody Center since its founding in 2001.

The gift from the McGrath’s estate came about from the couple’s personal interest in helping the daughter of a friend, attorney Ralph Fresolone of Hauppauge, NY.

“During their final years they took particular interest in my young daughter, who is on the autism spectrum,” Fresolone said. The McGraths, who had no children of their own, expressed that they wanted to do something for his daughter and asked that he recommend a charity that was dedicated to the welfare of children with disabilities.

Fresolone told them about The Cody Center and the care that the nurturing physicians and staff have provided his family and daughter over the years. He also told the McGraths about Stony Brook’s new children’s hospital. “Without hesitation they asked me to make certain that I provide a prominent place in their estate plan for The Cody Center and Stony Brook Children’s,” he said.

“Offering a facility where we can continue to provide the most advanced care for the community’s children is an enormous undertaking – and it is one we cannot do alone,” said Margaret McGovern, MD, PhD, Professor and Chairman, Department of Pediatrics, Stony Brook University School of Medicine, and Physician-in-Chief, Stony Brook Children’s Hospital. “The generous and thoughtful bequest from the McGrath estate will allow us to create a higher standard of children’s healthcare, and attract pediatric specialists and research funding.”

"The McGraths’ bequest is a tangible expression of their concern for children's health that will impact generations to come," said Dexter Bailey Jr., Vice President for Advancement at Stony Brook University.

The McGraths’ gift will support hiring a clinical investigator to conduct research designed to benefit patients with Autism Spectrum Disorders (ASD) and related developmental disabilities at The Cody Center. The Center was founded in 2001 through a gift of $2.5 million by Matt and Debra Cody of Port Jefferson, NY, the parents of three children with autism.

Fresolone recalled the McGraths as devout and caring people who touched many lives in wondrous ways. They were childhood sweethearts who met while students at St. Brigid’s Elementary School in Queens in 1937. Phillip was a trade school graduate and excelled in carpentry. Carolyn was a graduate of Grover Cleveland High School and fine-tuned her skills as a secretary in a finishing school.

For most of their lives, the couple lived in New Hyde Park, NY, and worked at the Nassau Community College Bookstore, where Phillip held the position of Director for several decades, and Carolyn balanced the bookstore’s accounts. Beginning with their childhood sweetheart days, they remained a devoted and loving couple for 73 years.

“It’s sometimes difficult to put into words personal feelings and recollections when writing or thinking about individuals who have passed and left an impression on your life,” said Fresolone, who will remember the McGraths as “two of the most caring and loving people I have ever met.”