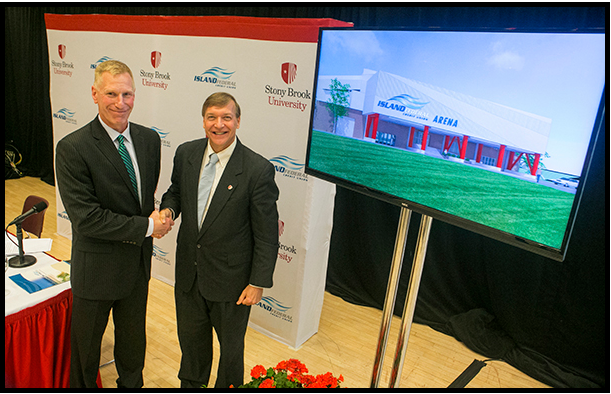 The agreement, facilitated under the auspices of the Faculty Student Association (FSA), a 501(c)(3) organization, consists of a long-term arrangement that includes two retail banking branch sites and ATMs at various locations on campus; title sponsorship for the newly renovated 4,000-seat Stony Brook Arena; title sponsorship for the 20-year old Stony Brook Film Festival; partnership in banking education through the Stony Brook University College of Business; support for Stony Brook Medicine programs including the new Stony Brook Children’s Hospital and the Long Island State Veterans Home; and, a commitment to support and provide benefits to Stony Brook University alumni.

Some of the benefits to the University community provided by Island as part of the agreement include:

“Stony Brook also shares Island’s belief in ‘people helping people,’” said Dr. Stanley. “Sharing our success with those around us. Now is the perfect time for these two powerful Long Island leaders to achieve this goal together.” 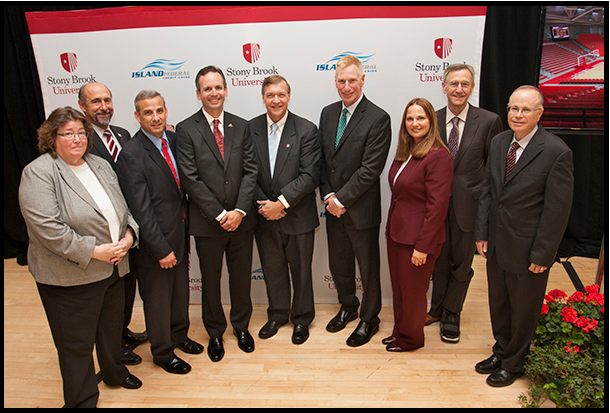 Part of the State University of New York system, Stony Brook University encompasses 200 buildings on 1,450 acres. Since welcoming its first incoming class in 1957, the University has grown tremendously, now with more than 25,000 students, 2,200 faculty and 20 NCAA Division I athletic programs. Its membership in the prestigious Association of American Universities (AAU) places Stony Brook among the top 62 research institutions in North America. U.S. News & World Report ranks Stony Brook among the top 40 public universities in the nation and Kiplinger named it the 29th best value in public colleges for in-state students and 20th for out-of-state students. One of four University Center campuses in the SUNY system, Stony Brook University co-manages Brookhaven National Laboratory, putting it in an elite group of universities that run federal research and development laboratories. As the largest single-site employer on Long Island, Stony Brook is a driving force of the regional economy, with an annual economic impact of $4.65 billion, generating nearly 60,000 jobs, and accounts for nearly 4% of all economic activity in Nassau and Suffolk counties, and roughly 7.5 percent of total jobs in Suffolk County.

About the Faculty Student Association at Stony Brook University

The Faculty Student Association (FSA) is a not-for-profit auxiliary services corporation licensed by the State University of New York to provide goods and services that contribute to the quality of campus life in a flexible, efficient and responsive manner to support the mission of Stony Brook University. FSA operates with no State support and is responsible for generating revenues to support its services, fund major capital improvements, and contribute to the educational, health care, and outreach missions of the University, the agreement was competitively solicited and bid through the University’s auxiliary