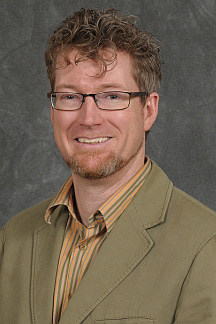 My research group investigates questions that loiter about the common ground shared by polymer, organic, and materials chemistry. With guidance from physics, theory, and engineering, we design, synthesize, and characterize organic materials with a focus on polymer-based materials. Whenever possible, we try to work with systems capable of assembling into aggregates with a greater degree of structure. Such assemblies, many inspired by biological systems, can exhibit novel properties with applications in materials for medical and energy applications.

Controlled free radical, organometallic, organocatalytic, anionic, and cationic polymerization methods, either alone or in combination with one another, can provide access to many possible polymeric structures, and many techniques of organic chemistry are applicable to the modification of these polymers for the preparation of an even larger variety of materials. We use these techniques to realize specifically designed polymeric architectures. Synthesis of these materials is the major focus of the research program, and students will gain experience in many synthetic techniques. A number of techniques for characterization of new materials by established methods (i.e., small-angle scattering, electron microscopy, etc.) at both the molecular level and at longer length scales are also used.

Representative research projects being undertaken are outlined below. We typically use living or controlled polymerization techniques in combination with initiator and/or monomer synthesis for the creation of novel polymers that should exhibit interesting self-assembly behavior in solution and in bulk.

The micellar form which amphiphilic block copolymers adopt in water is strongly governed by the relative volumes of the hydrophobic and hydrophilic blocks. We have demonstrated that ABC triblock copolymers comprising one hydrophobic block, one stimulus-responsive block, and one hydrophilic block can assemble into different structures depending upon the presence of specific stimuli (Figure 1).( Grubbs & Sun 2013; Cai et al. 2011; Sundararaman et al. 2008; Wegrzyn et al. 2005; Aubrecht & Grubbs 2005) Poly(ethylene oxide)- block-poly( N-isopropylacrylamide)- block-poly(isoprene) (PEO-PNIPA-PI) copolymers that undergo a thermally induced reorganization in water from small spherical micelles (~10-20 nm diameter) to much larger spherical vesicles (~200 nm in diameter) have been synthesized, though the transformation from micelles to vesicles takes approximately four weeks (Figure 2).( Sundararaman et al. 2008) 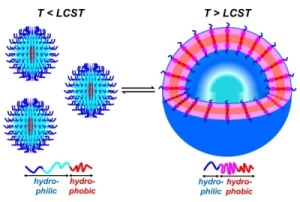 Figure 2. Poly(ethylene oxide)- block-poly(N-isopropylacrylamide)- block-poly(isoprene) structure (above); transmission electron micrographs of polymer assemblies in water at low (a) and high (b) temperatures; and evolution of assembly diameter over time by dynamic light scattering. (Sundararaman et al. 2008)

Much more rapid structural transformations were demonstrated by a second class of poly(ethylene oxide)-block-poly(butylene oxide-stat-ethylene oxide)-block-poly(isoprene) (PEO-PBOEO-PI) copolymers. Our working hypothesis is that the absence of strong interchain interactions in the responsive block in these systems facilitates a more rapid transformation than that observed for the acrylamide-based PEO-PNIPA-PI system (Figure 3). ( Cai et al. 2011) 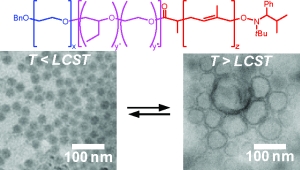 We are currently investigating two new related classes of these responsive polymers. Poly(ethylene oxide)- block-poly(N,N-diethylacrylamide)- block-poly(N,N-dibutylacrylamide) (PEO- b-PDEAm- b-PDBAm) have been designed as an example of an acrylamide-based system (like PNIPA) that cannot form hydrogen bonds with other PDEA chains (like PBOEO) (Figure 4). Assemblies of these polymer do appear to undergo rapid transformations upon heating. Analogous polymers with pendent photo-cross-linkable azide functional groups (PEO- b-PDEAm- b-PDBAm*) have also been prepared to facilitate the trapping of polymer assemblies at different temperatures during the transformation process. At slightly higher concentrations (5-10 wt%), PEO- b-PDEAm- b-PDBAm copolymers that undergo a spherical-to-cylindrical micelle transition reversibly form hydrogels. ( Sun et al. 2017)

We are investigating multiblock copolymers wherein different blocks are used to specifically stabilize the formation of ordered arrays of nanoparticles composed of different metals.

We have shown that alkyne functional block copolymers can be prepared by direct controlled radical polymerization of alkyne-functional monomers or by the coupling of terminal alkynes to polymers containing 4-bromostyrene repeating units.( Sessions et al., 2007) Cobalt carbonyl (and potentially other inorganic or organometallic species) can be selectively reacted with the alkyne-functional block to give hybrid composite materials with cobalt units spatially patterned on the nanometer scale (Figure 5).( Mîinea et al., 2004; Sessions et al., 2005; Grubbs 2005) The heating of these materials leads to the formation of cobalt metal within the patterned domains.

We are investigating the preparation of new conjugated molecules and macromolecules for electronic applications, especially in organic solar cells in collaboration with the Electronic Materials Group at the Center for Functional Nanomaterials at Brookhaven National Laboratory.

As part of a project designed to probe the potential utility of replacing sulfur with higher molecular weight calchogens (selenium, tellurium), we have developed methods for using ipso-arylative coupling chemistry for the synthesis of π-conjugated molecules and macromolecules. These methods allow the use of organic monomers and offer advantages in terms of monomer stability (as compared to the boronic acid derivatives used in the Suzuki-Miyaura coupling) and toxicity (when compared with the alkyltin derivatives used in the Stille coupling). Photovoltaic devices based on small molecule absorbers with a benzochalcogenophene-diketopyrrolopyrrole-benzochalcogenophene structure in the benzothiophene, benzoselenophene, benzotellurophene series showed a maximum power conversion efficiency of 5.8% for the benzoselenophene derivative (Figure 6).( Park et al., Chem Commun 2014 ) While the benzotellurophene derivative showed a lower bandgap, we suspect side reactions resulting from instability of the benzotellurophene moiety reduced the overall efficiency. 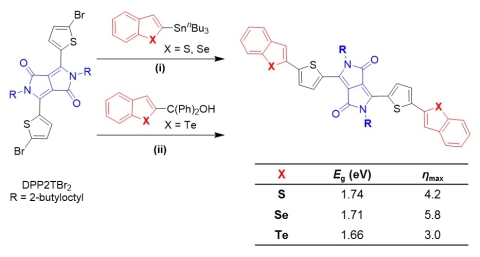 Tellurophene-containing analogues of the conjugated polymer PDPP3T were prepared by a similar ipso-arylative coupling method (Figure 7) ( Park et al., Ang Chem Int Ed 2014 ). Current generation at wavelengths as high as 1000 nm was observed from bulk heterojunction photovoltaic devices prepared from these polymers and PC 71BM, with a maximum power conversion efficiency of 4.4%.

While the stability of tellurophene-based molecules and macromolecules appears to limit their efficiency in photovoltaic devices, we plan to continue to explore the use of ipso-arylative coupling methods for the preparation of a range of π-conjugated motifs for optoelectronic applications. Preliminary efforts have shown that aromatic monomers bearing both diarylcarbinol and bromine groups, such as 2-bromo-3-hexyl-5-(hydroxydiphenylmethyl)thiophene can undergo ipso-arylative polymerization to afford P3HT with high regioregularity (Scheme 1) ( Shih et al., Polym Chem 2018 ).