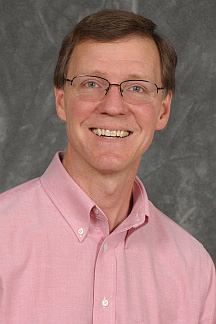 My research can be summarized as the design, synthesis, and study of new organic molecules, primarily directed toward biological applications. The majority of work in my group involves the design and synthesis of artificial receptors for biological compounds and ions. Current specific targets for receptor design include nucleic acids, inorganic arsenic, glucose, and specific dicysteine motif-containing peptides/proteins. The design aspects of this work involve extensive use of computer modeling and novel use of the computer program HostDesigner, following up on earlier work using a similar program CAVEAT. HostDesigner is used to discover structures that allow precise positioning of functional groups for efficient multivalent interaction with the target compound. Compounds designed using our computer-based methods are synthesized and studied as receptors for the targeted biological compounds and ions in solution. Incorporation of fluorescent signaling moieties into these receptors provides fluorescence-based sensors of potential use in medical and environmental diagnostic applications. In a somewhat unrelated project, we are developing experimental and data analysis protocols for measuring rates of chemical reactions using isothermal titration calorimetry, a technique that is generally used only to measure equilibrium binding constants.

Research in my group is based largely on synthesis and students in my group spend most of their time doing synthetic chemistry. Individual projects may also involve computational modeling and measurements of binding constants by NMR, calorimetry, fluorescence, etc.