Developing the Next Generation of Safe, Cost-Effective Nuclear Energy 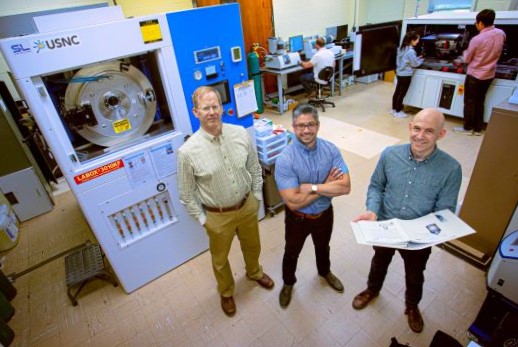 “The ARPA-E award process is extremely competitive and requires demonstrating leading-edge research and solutions,” said Fotis Sotiropoulos, Dean, College of Engineering and Applied Sciences.  “Jason and the EMREL team deserve hearty congratulations for a groundbreaking proposal all of us at CEAS can be proud of.”

“Current technology utilizing graphite requires HTGR’s to be quite large,” according to Professor Trelewicz. “The solution being proposed by the EMREL team will deliver new materials with enhanced moderating powder to enable both size reductions and an increased capability for long-term flexible operation.”

The proposed innovation relies on engineered moderator materials, which will be encapsulated in a radiation-tolerant, high-temperature material to increase the structural strength of the moderator while maintaining thermal insulation characteristics resulting in adequately low temperatures. The impact of Ad-Mod technologies on the reactor safety case and long-term operation will be evaluated using validated models based on international benchmarks.

All three investigators are part of the College of Engineering and Applied Science’s Department of Materials Science and Chemical Engineering.   Professor Trelewicz is also a core faculty member of the Institute for Advanced Computational Science.  The team includes collaborators in the Department of Nuclear Engineering at The University of Tennessee Knoxville and the Materials Science and Technology Division at Oak Ridge National Laboratories.